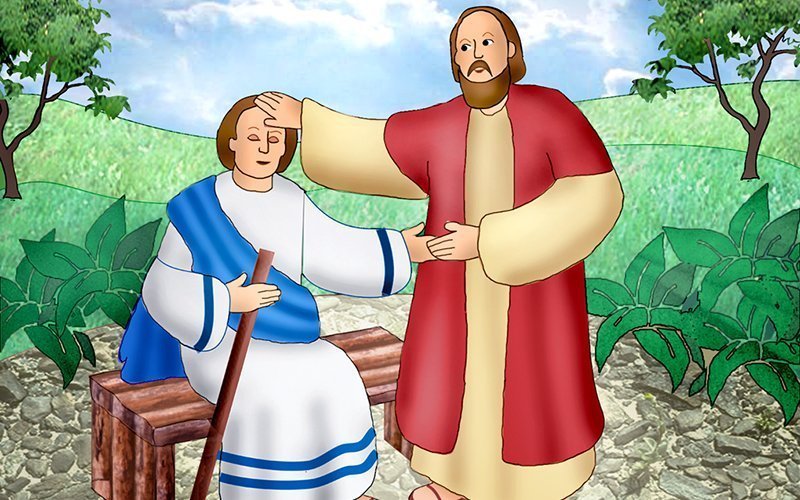 Saul begins to preach about Jesus

Saul begins to preach about Jesus

Saul had been a man who persecuted the Christians for acting against the laws of Moses. After Jesus appeared to him in a vision, he became blind. The men traveling with Saul brought him to the house of one of their friends in Damascus.

Ananias, a Christian, also had a vision.

“Get up and go,” the Lord told him, “to the street called Straight and ask at the house of Judas for a man from Tarsus named Saul.”

Ananias always tried to obey the Lord, but this request frightened him. “Lord, I have heard from many sources about this man, what evil things he has done to your holy ones in Jerusalem. And here he has authority from the chief priests to imprison all who call upon your name.”

The Lord said to Ananias, “Go, for this man is a chosen instrument of mine to carry my name before Gentiles, kings, and Israelites, and I will show him what he will have to suffer for my name.” So Ananias went and found Saul where the Lord had told him he would be.

“Saul, my brother,” he said, “the Lord has sent me, Jesus who appeared to you on the way by which you came, that you may regain your sight and be filled with the holy Spirit.” As soon as Ananias said this, Saul could see again, and then he was baptized.

Saul’s life had been changed. The next day, he went out into the synagogues and began to tell everyone that Jesus was the Son of God. Hearing these words from Saul raised many questions among the people, who asked each other, “Is not this the man who in Jerusalem ravaged those who call upon this name, and came here expressly to take them back in chains to the chief priests?” These comments did not discourage Saul, who continued to preach everywhere he went.

Saul left Damascus for Jerusalem, where he hoped to meet with the Christians there, but they were afraid of him. They did not know he had become a Christian. Barnabas, one of the Christians, told the others what had happened to Saul, and that he was now speaking with great courage about Jesus.

So the Christians began to accept Saul, but some of the Jews and Hellenists wanted to kill him. When the Christians learned of these plots, they helped Saul to escape and told him to go to Tarsus.

READ MORE ABOUT IT:
Acts 9

Q&A
1. Why was Ananias afraid of Saul?
2. What happened to Saul after Ananias spoke to him?

The apostle Paul, formerly called Saul, was transformed by God. He changed from a man who persecuted Christians and was a witness to the stoning of Stephen into one of the most important figures in early church history. His conversion, his missionary journeys and the difficulties he faced are recounted in the Book of the Acts of the Apostles. The example that Paul set for all Christians who came after him would have been enough for him to earn a high place in our Christian heritage, but he contributed more than that. He wrote a series of letters, called epistles, to individuals and churches across the world of his time to explain God’s commandments, establish guidelines for conduct or to try to teach them how to live together in peace. We should all spend some time in this Pauline year learning about the life and teachings of Paul.

John the Silent (454-558) built a monastery for himself and 10 other men when he was 18 years old. The monks wanted to live in solitude where they could devote themselves to hard work while maintaining an attitude of prayer.

Even though he spent most of his time in the monastery, word of John’s leadership ability did not go unnoticed. The Archbishop of Sebaste appointed him as Bishop of Colonia in Armenia.

Ten years later John saw a vision of a glowing cross in the air, and he followed it to the monastery of St. Sabas. John lived there for a time, then in the desert, then again at the monastery. He preferred to live alone and unknown, but people still sought him out for advice.