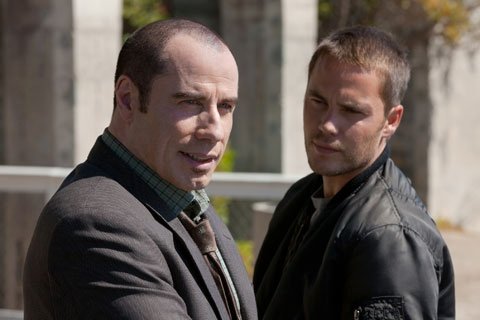 NEW YORK (CNS) — The prize (though it can hardly be reckoned an accolade) for the most appropriate film title of the year goes to "Savages" (Universal). This vicious, blood-soaked saga about drug lords glorifies primal urges, vulgarity and man’s inhumanity toward man.

Directed and co-written (with Shane Salerno and Don Winslow) by Oliver Stone — and adapted from Winslow’s 2010 novel — "Savages" is a cinematic exercise in moral relativism. Every action, no matter how twisted or harmful, is somehow justified in the dogged pursuit of self-gratification and revenge.

Instead of good versus evil, we have various forms of vice struggling among themselves — which means only one shade of darkness or another can triumph in the end.

Life is good in sunny California for buddies Ben (Aaron Johnson) and Chon (Taylor Kitsch) and for their shared lover Ophelia (Blake Lively), who goes by the initial O. Their hedonistic, pornographic lifestyle is financed in a rather unique fashion: They grow and sell the best marijuana in North America.

Ben and Chon are cast not as destructive drug dealers but as creative entrepreneurs. Chon, a former Navy SEAL, smuggled the premium seeds home from Afghanistan. Ben put his degree in botany from the University of California Berkeley to "good" use, and a multimillion-dollar business was born.

In "Savages," narcotics use is depicted as normal, liberating and the key to the American dream. No consideration is given to the social or personal effects that follow from breaking just (albeit controversial) laws and destroying brain cells. The only goal in view is to make lots and lots of money so you can live in style on the beach.

Even the police are in on the act, led by Dennis (John Travolta), a corrupt DEA agent.

The film’s slick direction, high "coolness" quotient and catchy soundtrack only serve to make its endorsement of immorality more insidious.

A Mexican drug cartel, led by Elena (Salma Hayek), wants a piece of Ben and Chon’s action. Rebuffed, Elena unleashes her goons, including Lado (Benicio Del Toro), to kidnap O and hold her for ransom.

The gang-like cartel is obsessed with the imagery of "La Santa Muerte," the goddess of death — a perverse idol which makes a blasphemous mockery of Catholic imagery and specifically of Our Lady of Guadalupe.

Ben and Chon will do just about anything to get their moll back. And so "Savages" lives down to its name as the duo descends into the abyss for a deadly game of cat and mouse, laden with sadistic cruelty and bloodshed.

"Savages" has not one but two endings. Neither overcomes the ethical indifference of the film’s outlook nor provides a moral resolution.