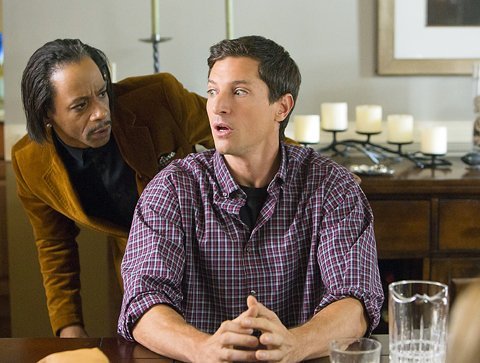 NEW YORK (CNS) — If a Spanish-language version of the shoddy genre satire "Scary Movie 5" (Weinstein) is ever produced, perhaps it should be called "Cinco de No-No." Like all of its predecessors, this latest installment of the recidivist franchise is replete with childish gross-out humor and demeaning sex gags.

By way of prelude, not exactly in the Chopin line, we’re treated to scenes of a bedroom liaison between Charlie Sheen and Lindsay Lohan. Set to music that recalls the antics of British bodice fancier Benny Hill, the scandal-prone duo’s exaggerated cavorting is interrupted by a sendup of the "Paranormal Activity" series.

Dan’s scientific work studying the minds of primates leads into a spoof of 2011’s "Rise of the Planet of the Apes," while Jody’s interest in ballet opens the door for mockery of the previous year’s "Black Swan."

Back home, meanwhile, Dan and Jody’s Hispanic — and hirsute — housemaid Maria (Lidia Porto) tries to fight off the demonic spirit that has followed the trio of adoptees to suburbia by deploying crucifixes, holy water and incense. When these Catholic accoutrements fail to do the trick, she resorts to others associated with Santeria.

The dopey jibes in director Malcolm Lee’s scattershot parody are as irksome as they are desperate. Indeed, the recurring joke of Dan’s apes inconveniently flinging their excrement around seems an all-too-apt metaphor for this project as a whole.

The film contains pervasive sexual and scatological humor, a frivolous treatment of homosexual activity, same-sex kissing, fleeting rear and partial nudity, some mild irreverence, drug imagery and references, at least one use each of profanity and of the F-word and much crude and crass language. The Catholic News Service classification is O — morally offensive. The Motion Picture Association of America rating is PG-13 — parents strongly cautioned. Some material may be inappropriate for children under 13.