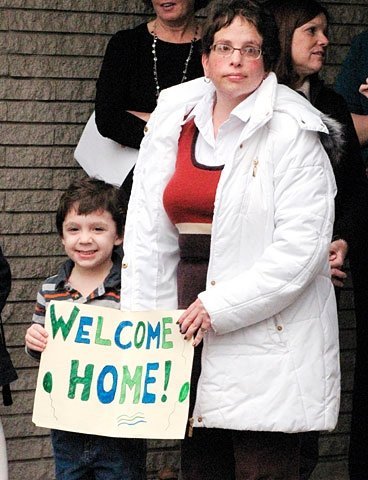 Homecoming celebrations are generally the stuff of high schools and colleges.

Yet following a tumultuous two-month setback for St. Patrick Elementary School, the balloons, signs and crowds in the parking lot Nov. 14 were highly appropriate.

The Owego school was again operable after incurring heavy damage from the flooded Susquehanna River just across Front Street. Damage to the basement and ground floor had forced students and staff into a temporary facility, but a speedy recovery process aided by numerous volunteers led to a relatively quick return.

"I knew how many people were working to make it happen. Everyone was giving time, prayers and donations," remarked Paula Smith, principal.

Smith had been displaced from both St. Patrick and — along with her 97-year-old father and 94-year-old mother — her Owego home. To add to her stress level, her husband missed out on the flood only because he’d had surgery two days earlier and was in a hospital.

"With my personal situation, it’s so wonderful to have one piece (the school reopening) normal again," Smith remarked.

The abnormality, so to speak, began last Sept. 8 — the very first day of the 2011-12 school year. Rising floodwaters in the Susquehanna, due to the remnants of Tropical Storms Irene and Lee, led to numerous early dismissals.

Sam Chandler, 11, a St. Patrick fifth-grader, and Leah Watson, 9, a fourth-grader, said they weren’t sure at the time why students were leaving. Leah — whose home is on the other side of the river and wasn’t damaged — didn’t find out about the flood until the next day.

Sam, on the other hand, was awakened in his Owego home at 3 a.m. on Sept. 9 to evacuate. Asked if he was scared, he replied, "I was actually kind of asleep." His family’s home suffered damage to the basement and first floor.

Smith’s house on Academy Street is about a block from the river. She said neighbors were forced to their roofs, and her elderly parents had to be rescued by boat as the Susquehanna rose to record levels.

The federal government declared a major disaster for Tioga County and its surrounding regions. St. Patrick School had water up to the basement ceiling, forcing much of its lower portion to be gutted. All classes relocated temporarily to the Our Lady of Good Counsel building in Endicott, Broome County, except for the 3-year-old prekindergarten, which moved to the Blessed Trinity/St. Patrick parish center.

Sam and Leah said they adjusted well to the transition but missed St. Patrick’s comfortable, spacious classrooms. So they were among the revelers when the school community returned home Nov. 14 to substantial hoopla.

"It was great, really. Once I got off the bus, everybody was cheering. They held up a sign, ‘Welcome to St. Patrick School,’" Sam recalled.

"All the kids greeted each other as if they hadn’t seen each other in weeks, and it just had been the previous Friday," Smith remarked. "It really was just heartwarming."

Renovations are now coming down the home stretch. St. Patrick’s basement was due to be ready in February, allowing the 3-year-olds to move back from the parish center next door. The school community’s determination to get back into its digs has astounded Anne Willkens Leach, diocesan superintendent of schools.

"These people are so dedicated, they’re unbelievable," she commented.

Enrollment at the prekindergarten through fifth grade facility has remained at its pre-flood level of approximately 90 students. Smith said some parents were forced to move away because their homes were uninhabitable; others found the extra distance to Endicott to be too much. However, those losses were offset by the arrival of some students from Owego Elementary School, which is closed for the rest of 2011-12 and in its own temporary lodgings.

Smith acknowledged that there’s a long way to go, saying financial donations are going toward tuition assistance for families affected by the flood.

"We do have a percent still struggling with their homes and jobs; certain businesses have closed," she said. "People had to come forward that didn’t need support when the year started."

Acts of kindness to benefit St. Patrick School have come from across the diocese, such as students at one school who raised $155 from a lemonade sale, and another school that raised $800 — with their pastor matching that total — from a read-a-thon.

"Every day there’s a package, a letter, a call. There are people that are going to help you get through this, one day at a time," Smith said.

The principal has received a big personal assist from Father William Moorby, pastor of Blessed Trinity/St. Patrick parishes, who arranged to have Smith and her parents occupy a home he owns in Newark Valley while theirs is being repaired.

"He has gone out of his way to make it comfortable, decorating for every holiday and visiting my parents often," Smith said. She noted that her husband, who is still recovering from a lengthy illness, now occupies the second story of their Owego home and she hoped to move back there with her parents by early February.

Her voice filling with emotion, Smith said the greatest ongoing comfort during her various trials has come from the St. Patrick students.

"Every day a child was saying, ‘I prayed for you last night,’" she said. "One child asked, ‘Are any of our prayers being answered?’ I said yes, because I have strength every new day and I think that’s what’s done it."