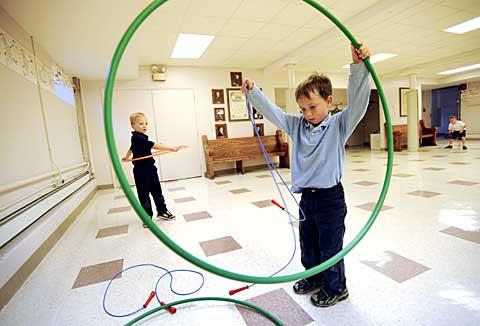 Last year when a parent called David Paddock, principal at St. Michael School in Penn Yan, and asked him to "make her daughter run" during recess, he jokingly replied that he’d add it to his list of things to do. The phone call, however, did prompt Paddock to start thinking of ways to encourage St. Michael students to be more active.

One way to do this, he decided, would be to increase St. Michael’s physical-education offerings. Students previously had gym class twice a week, but starting this year, they’ll have gym class three times a week, Paddock said. He believes this change will be good for all the children, including the girl whose mother called him last year.

"I think three days of physical education, structured physical activity, will be better than us just chasing her around here," Paddock said with a chuckle.

Paddock said the Greater Rochester Health Foundation’s 5-2-1-0 ad campaign also caught his attention last year and inspired him to encourage St. Michael students to be more active. After hearing the campaign’s catchy jingle on the radio — "5-2-1-0, be a healthy hero!" — he looked into the campaign and learned that the slogan is a way of encouraging children to each day eat five servings of fruits and vegetables, spend two or less hours in front of the computer or television, spend at least one hour in active play, and drink zero sugary drinks.

Paddock contacted the Greater Rochester Health Foundation, which provided him with a variety of resources related to the 5-2-1-0 campaign, including posters and wrist bands for the students. The foundation often works closely with schools and community institutions, said Bonnie DeVinney, the foundation’s vice president and chief program officer. Each year, the foundation disperses to such institutions thousands of dollars in grant money, which is used to fund programs and initiatives intended to prevent lead poisoning and promote physical activity and healthy lifestyles for children.

"We work closely with schools because kids spend so much time there," she said.

Foundation officials hope that by encouraging children to adopt healthy lifestyles, parents also may begin making healthier choices, DeVinney noted. Such an approach has proven successful in the past, she added, citing efforts to educate children about the dangers of smoking and the benefits of recycling.

"Kids learned about it at school and came back and said to their parents, ‘Smoking is not good for you. Please stop,’ or, "Where’s our blue box?" she said.

Still, children spend the bulk of their time at home, especially in the summer, so it’s important for parents to be educated about healthy lifestyles as well, she added.

"There is increasing evidence that kids can make great strides regarding healthy behavior during the school year, and then they lose it over the summer," DeVinney said.

Many parents mistakenly believe their children get all the physical activity they need during gym class at school, so they don’t encourage their children to be active when they’re at home, added Lynette Loomis, consultant to the Greater Rochester Health Foundation and its Healthy Hero program.

"Because of all the pressure on academics, some schools may have cut back on physical education and recess," Loomis said.

St. Michael School is taking the opposite approach, she noted.

"They subscribe to a lot of the Healthy Hero principles. They’re trying to be a healthy school for kids," Loomis said.

"The third day of physical education will have a heavy emphasis on not just exercise and activity, but also on nutrition, good eating habits and good decision-making," he said. "We are working with the Finger Lakes Council of Alcoholism and Addiction to provide our students with instruction on healthy choices and a positive lifestyle."

During their extra physical-education classes, students also will be exposed to a variety of activities outside of the traditional gym-class fare, including yoga and Irish dance.

"We are looking for some other alternative things that you don’t normally do in elementary-school gym classes," Paddock said.