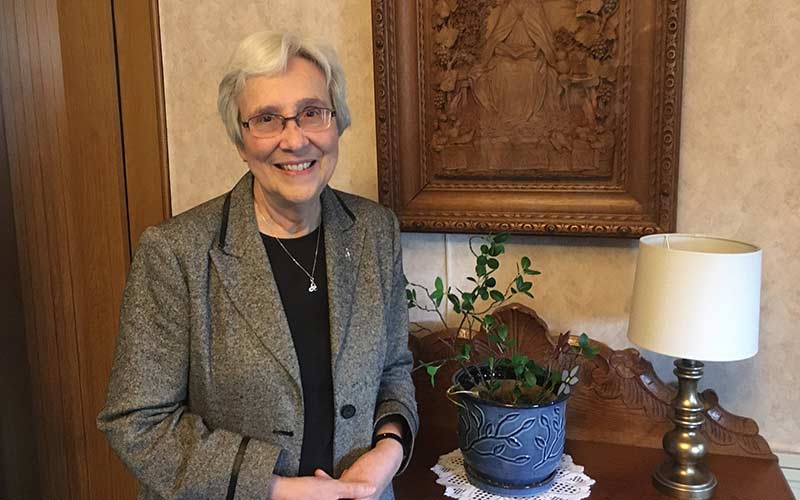 TOWSON, Md. (CNS) — While their numbers may be fewer, the School Sisters of Notre Dame are providing vital ministry around the world, according to Sister Roxanne Schares, Rome-based general superior of the religious congregation.

Sister Schares was in Towson to visit Villa Assumpta, a retirement residence for members of the congregation.

She and the four other members of the sisters’ General Council have been visiting their sisters’ various ministries in the United States and Canada during a monthlong tour that began March 28.

It is the General Council’s first visit in two years because of the coronavirus pandemic.

“Our desire is to really follow Christ radically and to keep finding new ways to respond to mission,” said Sister Schares, a member of her congregation’s Province of Africa.

“I think the charism that we feel we’ve been entrusted with is that longing for oneness and the struggle for unity,” she said in a March 30 interview with the Catholic Review, the news outlet of the Archdiocese of Baltimore.

“When we talk about mission, it’s really about what God’s world needs now,” she said, “and I think a strength we have is our desire to discern together how we can respond to that call.”

Sister Schares said her congregation is currently deeply involved in assisting with the catastrophic humanitarian crisis brought on by the Russian war on Ukraine.

Convents, schools and other institutions of the School Sisters of Notre Dame throughout Europe are welcoming refugees, she said. Sisters in Poland, Hungary, Germany, Sweden and Slovenia are among those caring for refugees.

In Hungary, refugee children are being received into the sisters’ kindergartens, primary and high schools. The sisters also are assisting relief efforts through Caritas and have provided financial support for refugees.

“I’m really encouraged that our sisters in Europe, especially in Eastern European countries, are really welcoming many of the refugees and finding ways to accommodate them in our houses and institutions,” Sister Schares said.

The general superior noted that her religious community has redoubled efforts to live “interculturally.”

“We’re an international congregation,” she said, “and we need to witness to intercultural living. We need to be deliberate in the choices we make.”

That involves sisters from different countries living and working together, Sister Schares said. It also means being more mindful of the cultures of the people the sisters serve.

“Right here in Baltimore, we work and collaborate with people from different cultures and different backgrounds,” she said. “How do we learn to be together in a way that respects the dignity of each person and also creates a communion?”

The congregation’s charism has traditionally focused on education, which remains a central part of the order’s ministry.

That work continues in the Baltimore Archdiocese at institutions such as Notre Dame Preparatory School in Towson, Mother Seton Academy and Notre Dame of Maryland University in Baltimore, and Sisters Academy of Baltimore.

“For us, education is about the transformation of the person,” said Sister Schares, noting that the sisters also are strong advocates for peace, social justice and protecting the environment.

While the School Sisters counted 12,000 members in the 1960s, today there are approximately 2,000 sisters around the world. Sister Schares estimated that the median age is in the upper 70s.

The School Sisters see new vocations flourishing in Africa, where they serve in six countries. But there has been a stark decline in many parts of the West.

“We’re realizing that religious life is at a different moment in its expression and we’re moving into a new form of religious life,” Sister Schares said. “We don’t know what it will be.”

“We’ve come to realize that religious life is meant to be a prophetic witness in the world,” she said, “and Pope Francis has said to us religious men and women that we need to embrace the call to be prophets and we need to be experts in communion.”

Like other religious communities, the School Sisters have closed some of their buildings in the United States because of declining numbers.

Retired sisters at Villa Assumpta, for example, were relocated to Stella Maris in Timonium, Maryland, and the order plans to sell the massive Towson property after homes for the remaining 40 sisters at the residence can be found.

“There’s a letting go that we are experiencing,” Sister Schares said, “and there is pain with that letting go. It’s true that we have experienced many beautiful things in these buildings and in these chapels. But the memories are with us and the home we create is because of our relationships with one another.”

As sisters make new communities in places such as Stella Maris, she said, they find new ways of “being in mission.”

“That’s where the hope is,” Sister Schares said.

Matysek is managing editor of the Catholic Review, news outlet of the Archdiocese of Baltimore.