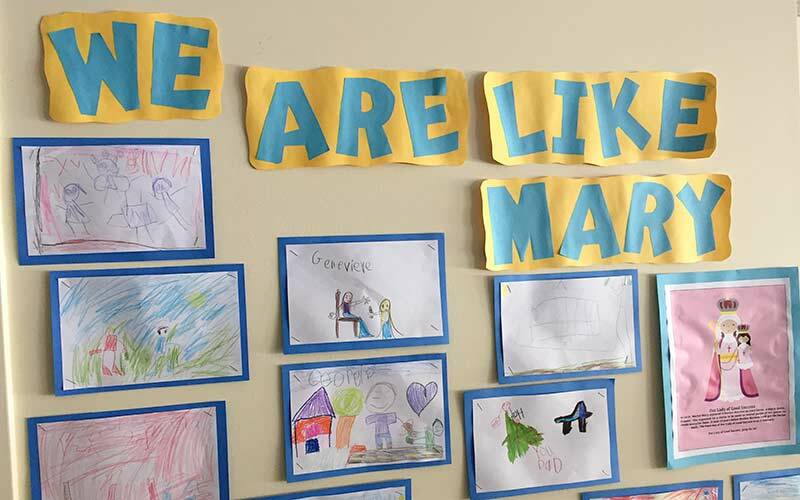 A bulletin board in Amy Sanderson's kindergarten classroom at St. Louis School in Pittsford displays students' work on the topic of Mary. (Photo by Amy Sanderson)

Kindergarten teacher Amy Sanderson was looking for a unique lesson to start the 2021-22 school year. She found her inspiration in a gift from a friend.

Sanderson’s friend had given her a rock painted with the image of a ladybug along with a story of the insect’s connection to Mary.

“I thought, ‘Great, we are going to go with the theme of ladybugs, and we are going to talk about that story and incorporate Mary into the beginning of the year,’” explained Sanderson, who teaches at St. Louis School in Pittsford.

But the inspiration didn’t end there. While watching EWTN, Sanderson learned of the children’s book Our Lady’s Wardrobe, which imagines Mary’s attire in heaven and describes how she has looked when appearing to various people on Earth.

Soon thereafter, Sanderson received a file from Christine Merle, coordinator of curriculum and instruction for the Diocese of Rochester’s Catholic schools, containing images of the various faces of Mary.

“So I put these Mary (images) all over the room, and we talked about the different names, like Our Lady of Perpetual Help, Our Lady of Mount Carmel and Our Lady of China,” she said. “So I talked about our skin tones and the diversity of the children in this class. And I brought it back to we are all a part God’s family, and we are all united.  We are all brothers and sisters.”

Using Mary to demonstrate that everyone is part of God’s family despite their differences is just one way diocesan Catholic schools are using a Christ-centered approach to teach multiculturalism. James Tauzel, superintendent of schools for the diocese, noted the increased focus on multiculturalism has arisen from discussion in the broader society about issues of diversity, equity and inclusion.

“We have looked at how our Catholic schools are going to navigate (this issue), and we knew for sure that we wanted to go through a faith lens and that we needed to remain true to the teachings of the church,” he said of Catholic schools’ approach.

Tauzel noted that Catholic social teaching on such topics as the dignity of life, love for all people, and seeing God in ourselves and others is at the heart of the schools’ multicultural efforts. As plans for teaching multiculturalism were being made, Mary quickly emerged as a useful example.

“We were looking at the (Marian) apparitions around the world, and it was really striking how Mary takes on the cultural identity of those she’s appearing to,” he said. “These symbols and representations that appear with her connect with the cultures and remind us all that we are called to love God, and she wants all of us to be led to Jesus.”

Tauzel noted that staff of the Catholic schools’ office found resources such as the illustrations of Mary’s many faces, showing her appearances to cultures around the world.

The Catholic schools office then expanded on these examples to incorporate the wide array of saints recognized by the Catholic Church. While students have long studied saints as part of their curriculum, Tauzel said such study now has expanded to include discussing the cultures, countries and time periods in which the saints lived.

“We normally celebrate feast days or talk about saints on their feast days throughout the year, but we’ve started to try to infuse some of their cultural identity into that,” Tauzel said, citing as an example the Turkish connection to St. Nicholas.

This past fall, students at St. Mary School in Canandaigua and St. Francis-St. Stephen School in Geneva spent several weeks researching the lives of saints and preparing presentations on saints of their choosing. They then dressed up as those saints and taught their fellow students about them.

“They really branched out and chose saints from different areas (of the world),” Merle noted.

Tauzel and Merle said they are taking things slowly and have been very intentional about selecting projects to infuse multicultural awareness into diocesan schools.

“This is a very slow journey, because we want to give it justice and make sure that we are bringing people together,” Merle said.

“We want to make sure that everything is in alignment and supportive of who we are as Catholic schools and the mission of the church,” Tauzel added.