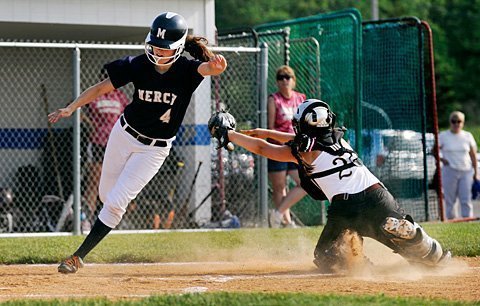 Above, Mercy's Kelly Smith narrowly avoids being tagged by Pittsford Mendon catcher Anna Merante during the Section 5 Class A championship game May 31.

In addition, Notre Dame girls’ track earned a state Division 2 title with a record-breaking performance in the 400-meter relay.

The Crusaders earned their state crown June 8 by setting a new school mark. Competing at Middletown High School, Notre Dame’s team of Brittany Schutrum, Mara Skordynski, Victoria Schutrum and Jen Smithers posted a time of 49.65 seconds in the Division 2 400 relay to edge out second-place Amherst (:49.83). The Crusaders placed 13th overall (Divisions 1 and 2 combined) in the event.

Notre Dame was coming off three first-place finishes at the Section 4 state qualifier May 30. Brittany Schutrum ran on the winning 400 and 1,600 relays, and also placed first in the 100.

The Monarchs, seeded No. 2 in Section 5 Class A, gained a sectional title May 31 with an 8-3 victory over No. 1 Pittsford Mendon. The key blow was Aidan Falk’s three-run home run in the fourth inning, her 12th of the season, that put Mercy up for good at 5-3. Falk, the tournament’s Most Valuable Player, went 3-for-4 and drove in five runs, while teammate Maddie Kocoloski went 3-for-3. Megan Ferraioli pitched the complete-game win, allowing five hits.

Earlier in sectionals, Mercy won 10-3 over No. 7 Canandaigua May 23 in quarterfinal play as Emily Graham had three hits and Falk scored three runs. In the semifinal, the Monarchs edged No. 5 Brighton 5-4 May 29 as Ferraioli homered and singled home Kelsey Johnson with the winning run in the bottom of the seventh inning.

Mercy’s season ended in state Class A quarterfinal play June 4, as the Monarchs lost 4-1 to Hamburg of Section 6. Mercy scored its lone run in the first inning but allowed four in the third, finishing its season with a 17-7 record.

The Little Irish won a thriller in the Section 5 Class B meet May 25, scoring 124 points to edge second-place Batavia’s 121-point total. Josh Hanna led Aquinas with individual victories in the 200- and 400-meter runs while also taking part in the winning 1,600-meter relay. Other event winners were Ben Drexler in the 400 hurdles and Khris Greggs in the triple jump.

The Knights won the Section 5 Class A team title May 24, totaling 312 strokes among its top four finishers to best second-place Pittsford Sutherland’s 318 total. Colin Dubnik shot 75 to earn comedalist honors, while the Knights’ Peyton Steigerwald had 77 and Michael Lane and Connor Raeman each totaled 80.

At the Section 5 individual championships May 18 and 20, three Knights became eligible for state-tournament play: Dubnik, who tied for sixth place with a two-day total of 158 (77-81); Lane, who finished eighth in 159 (82-77); and Andrew Galvin, who tied for the ninth and final state berth at 160 (80-80) and then advanced out of a three-way playoff.

The state tournament, held June 2-3, saw Dubnik and Galvin lead the Knights by tying for 21st place among 99 finishers at Robert Trent Jones Golf Course in Ithaca. Each shot 159, with Dubnik posting 77-82 and Galvin 76-83.

The Crusaders dominated at the Section 4 Class D championship tournament May 23, winning the six-school event with a stroke total of 429. Second-place Marathon finished a full 29 strokes back at 458.

* Notre Dame baseball finished as runner-up in the Section 4 Class D playoffs. The top-seeded Crusaders won 12-1 over Worcester in first-round play May 21, 13-0 over Windham-Ashland-Jewett in the quarterfinals May 23 and 12-1 over Marathon in semifinal action May 29. In the title game against second-seeded Hancock May 31, the Crusaders endured a 4-2 loss to end up with a 16-7 record.

* Notre Dame softball, the No. 1 seed in Section 4 Class C, won 16-0 over Sidney May 28 in quarterfinal play and 8-2 over Union Springs May 30 in the semifinal round. The Crusaders’ title bid was ended by third-seeded Seton Catholic, 3-0, in the final June 1 as they finished with a 21-2 record.

* Notre Dame boys’ track placed second in the Section 4 Class D meet May 22 with 63 points, with Cherry Valley-Springfield taking the title with 112 points. The Crusaders were led by second-place finishes from Matt Watkins in the shot put, Tom Watkins in the discus and Carl Shen in the long jump.

* McQuaid boys’ tennis reached the final of the Section 5 Class A team championship. The Knights were the No. 1 seed but fell to No. 3 Brighton, 5-2, in the title match held June 3.