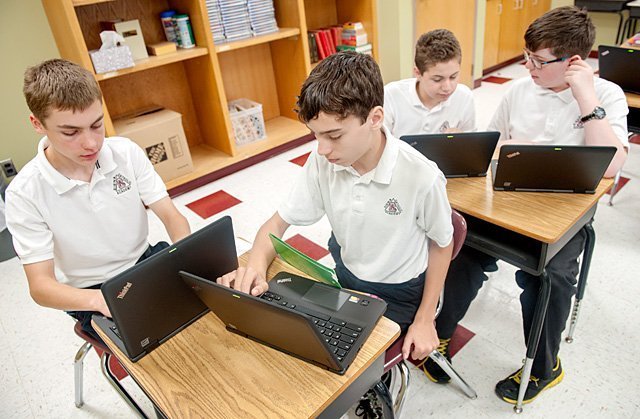 Siena Catholic Academy eighth-grader Will Wagner (from left) and seventh-graders Joey Gividen, Justin Holt and Michael Lynch use Lenovo ThinkPads provided to them by the school while working in Latin class June 8.

More area Catholic schools are expanding the use of personal technology devices in their curriculums to better prepare students for the future.

Siena Catholic Academy in Brighton decided to provide Google Chromebooks for incoming sixth-graders this fall as Siena moves into what Principal Martin Kilbridge described as an expeditionary, project-based model of teaching. The students will keep the laptops for their three years at the school and take the devices with them when they move on. He added that the goal is for each future sixth-grade student to receive a laptop as well.

Chromebooks are based on the Google Chrome operating system and use "cloud-based" storage of applications (apps) and data that can be accessed anywhere via the Internet. While the seventh- and eighth-grade students won’t have their own Chromebooks, they will have access to them, as a greater emphasis on research-based projects also will be part of their curriculum, Kilbridge added.

"You gain knowledge of the world by exploring and engaging it," he noted.

Adults and students are surrounded by technology that is here to stay, Kilbridge said, and cloud-based computing is increasingly the direction in which technology is headed.

Use of such apps as Dropbox allow students to share documents in group research projects, added Don Mills, principal of Immaculate Conception School in Ithaca. The school is moving toward a one-to-one, device-to-student model and has nearly reached that goal in its upper grades, he added.

"(Technology) gives you a lot more options to more effectively do some of the things we’ve always done," he said. "So, instead of collaborating with 15 kids in a classroom, you can do that with kids across the world. There is a lot of potential that can be accessed that way." 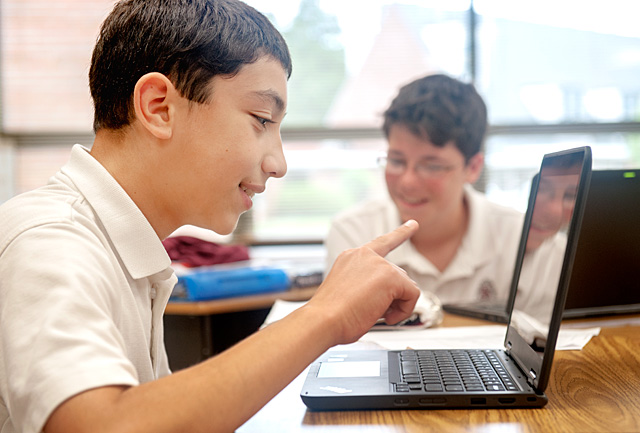 Siena Catholic Academy seventh-graders Anthony Gallina (left) and Max Chew use Lenovo ThinkPads provided to them by the school while working in Latin class June 8.

Data from a 2013 study by the International Society for Technology in Education (http://bit.ly/1kH0mo2) illustrates the growing use and benefits of such tools as tablets and smartphones.

* 50 percent of students ages 10 to 18 go online for homework help at least once a week;

* Students who study on mobile devices spend 40 minutes more per week studying than those who don’t study on the devices;

* 76 percent of teachers say technology allows them to respond to a variety of learning styles.

Schools have a responsibility to guide students in the digital world — for both academic and social purposes — in a way that maintains their safety and provides enriching experiences, local educators agree.

Writing in the school’s June newsletter, Debra Marvin, instructional technology coordinator for St. Mary School in Canandaigua, observed that there are five key reasons to embrace technology in the classroom: access to resources, the ability for teachers to meet the instructional needs of all students, increase in teachable moments, preparation for the workforce and college, and digital citizenship.

Acknowledging some of the possible negative ramifications of technology, she wrote: "We can … build a sense of online community so that our students understand that hurtful words online are just as nasty as words said aloud. We can increase our students’ ability to think critically by teaching them how to differentiate between reliable and unreliable websites. We can help our students stay safe by educating them about the dangers of trusting people they chat with online, or the information they send to one another over the Internet. … We can help our students learn the best and most responsible way to use (technology) in their lives, something we can’t do if we keep it out. Teaching digital citizenship is our way to teach students to be safe while using technology, even when they are not with us."

Siena students will undergo a six-week instructional program on using the Internet for research purposes, with a focus on academic honesty and online safety, Kilbridge said. The Diocese of Rochester’s Office of Catholic Schools and Department of Information Technology work together to ensure proper filters are in place on the Siena network, said Anthony Cook III, superintendent of diocesan schools. Siena will instruct parents on how to install filters on their home networks, Kilbridge said, and the school’s Acceptable Use of the Computer Network and Internet Policy will be strengthened to include the use of Chromebooks at school and at home.

While All Saints Academy in Corning has Wi-Fi access throughout its building, wireless speed is hampered when multiple devices are added, explained Katherine Broderick, a technology teacher there. So, the school decided to follow the recommendation of diocesan IT to purchase a set of Classmate Tablets, which are Windows-based tablets with built-in magnifying glasses and thermometers for science lessons.

Funding also is a challenge, she added, since Catholic schools don’t have access to the kinds of grants that are available to public schools. Kilbridge said Siena received seed money from the diocese for the initial purchase of Chromebooks and improving its infrastructure, but school officials will seek donors for future financial support of the program.

At St. Joseph School in Auburn, staff members have developed a long-term technology plan incorporating iPads, Apple TV and projectors to provide one-to-one technology over the next five years, said principal Susan Nedza. Apple TV allows for streaming video and access to Apple U, which offers virtual field trips to far-off places, she added. In the short-term, teachers are adjusting their styles as well, she said.