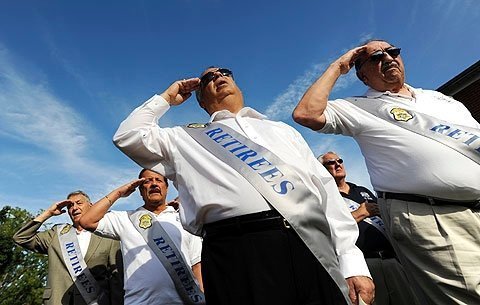 But earlier that morning, her son, Gavin, a first-grader at the newly reopened school, was asking about the details of the terrorist attacks of Sept. 11; he had heard that people had flown planes into buildings and wanted to know more.

“We didn’t ever really talk about it until this morning,” Sweeney said before the ceremony. “I feel it’s important to tell him exactly what happened because he’s going to find out anyway. I want to be as truthful and as honest as possible with him.”

Sweeney remembered back to when she heard about Sept. 11: She was away from home, at college in Utica. Someone in the dorm had heard about the attack, she said, and she and her classmates spent their day glued to the television as their classes were canceled. She remembers talking to her mom on the phone, who was sure she’d have to pick up her daughter at college. Although the attacks were miles away, they hit home for Sweeney’s classmates.

“A lot of people I went to school with there were from New York City, or had family down there, so it was really hard for them,” Sweeney said.

She said she has bookend pictures of the New York skyline to remember it: One was taken during a trip in May 2001 and the other was taken in a trip in December 2001.

“I have gone down there a few times, and every time I go by there, it’s so solemn,” Sweeney said.

Sweeney was not alone in searching to convey the emotions of Sept. 11 to Holy Cross students, who were not born or were too young to remember that day. According to statistics on the National September 11 Memorial and Museum website, 2,977 people from 93 nations were killed on Sept. 11, 2001, when terrorists hijacked and crashed two planes into the World Trade Center in New York City, one plane into the Pentagon in Washington, D.C., and one plane in an empty field in western Pennsylvania that was about 20 minutes by air from Washington. The casualties included hundreds of first responders.

Holy Cross Principal Kathleen Dougherty said during the ceremony that most of the school’s students probably have no idea, or just a general idea, of what happened on Sept. 11, 2001. She noted that students may have picked up on the emotions of the adults around them, including sadness, of that day.

Yet she said she hoped they also held on to hope: “The hope that one day we will all be able to live in peace and harmony.”

The plaintive cry of bagpipes played by pipers from the Gates Keystone Club Police Pipes and Drums opened and closed the ceremony, and participants prayed for those who lost their lives during the Sept. 11 attacks and during the conflicts that followed, including first responders and members of the military. During the ceremony, the American flag was slowly raised up the Holy Cross flag pole, where it hung still on the windless day as students said the Pledge of Allegiance and sang "The Star-Spangled Banner." Then the flag was lowered to half staff as Katherine Evans, director of music at Holy Cross Church, played "Taps." The school’s bell, which is mounted outside of the building, tolled.

The flag-raising was one of the first events in the newly reopened Holy Cross School, which had closed in 2008, but was reborn this year upon the merger of Our Mother of Sorrows School in Greece and Cathedral School at Holy Rosary in Rochester. Yet rather than focusing on the school’s beginning, the ceremony was centered on teaching students to appreciate the peace and freedom they enjoy.

“This ceremony today is not just because of the opening of the school, but it is because of the wonderful gift we have for being part of our country,” Father Thomas Wheeland, Holy Cross’ pastor, said.

“We must work for peace and dignity in those times and places were the sanctity of human life continues to be challenged,” he prayed.

Monroe County Executive Maggie Brooks said the attacks were motivated by pure evil and were a tragedy that ripped at the heart of Americans, noting that the country responded in many ways, by becoming strong, angry, sad and resilient.

“Certainly we are a stronger, more vibrant country because of that day,” Brooks said.

After the ceremony, Rochester Fire Department Chief John Caulfield said that he had spent a lot of time telling his own children about Sept. 11, 2001, and he focused on helping them remember the tragedy and the people who died. He noted that many area firefighters had friends who perished while responding to the attacks.

“They ended up sacrificing their lives to save thousands of people, and that’s what we are all about,” Caulfield said.

He said people also need to remember what happened after the attacks: an unprecedented spirit of unity that erased political divisions.

“We are all one people, and we have got to work together to make the world and country a better place," Caulfield said.

Michele Begemann of Greece, whose children attend Holy Cross, said she had told them that on Sept. 11, 2001, bad people had attacked America, and it was a sad day. Yet her main focus is to help her children appreciate living in America and the freedoms they enjoy, she said.

“A lot of our conversations happen around the dinner table, and I point out how we can pray and practice our religion,” Begemann said. “We try not to dwell too much on the horror of the day.”

Begemann said it was important for students to see the first responders present at the ceremony.

“There’s a community around them, and they can go to these people if they need help,” Begemann said.

Ten-year-old Matthew Lyons of Charlotte recalled learning about Sept. 11 in school, and coming home to ask his mom about the tragedy. Later, he said he saw television footage of the smoky aftermath at the Twin Towers.

“It was just really sad,” Matthew said of television footage of the tragedy. “It’s just a big fire and fires are only meant for certain things. It’s not meant for violence. It just makes me think why would people do this?”

Eleven-year-old Daryl Wilson of Rochester, a fifth-grader at Holy Cross, also recalled his emotions after seeing that footage.