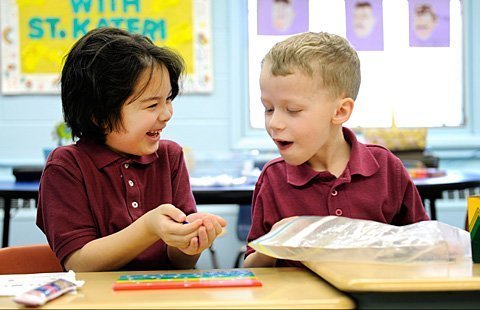 Imagine a gym class where, in addition to perfecting their athletic technique, students break out pencils to calculate the amount of effort exerted in throwing a ball.

Such scenarios are increasingly common at Catholic schools across the diocese this year, as teachers adapt to new state and national standards stipulating what students should know when they complete certain grade levels.

The standards also detail the skills students should have, such as the ability to closely read and understand a complex nonfiction passage and the ability to apply math concepts to such real-life situations as throwing a ball in gym class.

The new standards, called Common Core State Standards, have been adopted at New York state’s public and private schools as well as schools in 44 other states nationwide. New York already has realigned its curricula to reflect new standards in English-language arts and math; changes are currently under development to accommodate new standards in science, social studies and English as a second language.

"It’s critical that we as Catholic-school leaders are on the same cutting edge as the public schools," said Anne Willkens Leach, superintendent of schools for the diocesan Department of Catholic Schools.

Administrators with the Diocese of Rochester give the new common-core standards high marks, but acknowledge that curricula changes have generated a mountain of paperwork for teachers, packed schedules with meetings, training sessions and workshops, and have rendered obsolete certain textbooks and teaching methods.

"We can’t teach to the test anymore," Willkens Leach said. "We teach kids a way to problem-solve to find the answer."

The common-core standards, which were drafted by the National Governors Association and the Council of Chief State School Officers, stress a more focused core of material being covered in greater depth, educators said. By narrowing the focus, educators make sure students understand concepts before they move on to the next concept.

"Education used to be a mile wide and an inch deep; now it’s an inch wide and a mile deep," said Ann Frank, coordinator of assessment and professional growth for the diocesan Department of Catholic Schools and a representative on the state education department’s Staff and Curriculum Development Network.

The goal is to get students to retain the material for the long term and cut down on the need to review the previous year’s material. Another goal is to prepare U.S. students to be competitive with their international peers.

The standards call for teachers to help students become fast and accurate when working math problems, to ensure that math curricula is a progression across all grades, to apply math concepts to the real world, to require as much reading of nonfiction as of fiction, to foster close-reading skills, to teach students to use evidence from reading passages in both conversation and writing, and to increase students’ vocabularies.

"We are trying to prepare students for the types of writing they will be doing in the future: more informative, explanatory types of writing," said Mary Ellen Wagner, assistant superintendent for curriculum and instruction for the diocesan Department of Catholic Schools.

"We have a mantra that every teacher is a reading teacher," said Willkens Leach, who noted that Catholic schools have the advantage of being able to include Scripture and other religious reading as part of their fulfillment of nonfiction reading requirements.

Sister of St. Joseph Kathleen Lurz, principal of St. Kateri School in Irondequoit, said the idea of integrating such skills as reading and content from one subject area into another is nothing new for Catholic schools. For instance, a unit on meat packers may be studied in social studies, music and English-language arts.

"We’ve always done integrated learning," Sister Lurz said. "We even did it back when I was teaching junior high 30 years ago."

What is new, she said is the depth teachers now are asked to reach on a subject. One-word answers on tests are gone, replaced by lengthy responses requiring students to demonstrate their knowledge.

And as expectations have increased, preparation has begun at earlier ages. For instance, preschoolers, rather than kindergartners, now focus on letter recognition and counting, Sister Lurz said.

This need for instruction of very young children has led some educators to criticize the new standards. In 2010, more than 500 early childhood professionals with the nonprofit Alliance for Childhood signed a joint statement opposing standards for children in kindergarten through third grade. The statement charged that standards emphasized direct instruction at the expense of play-based learning, which they called an essential and more effective way of helping young children learn.

"Many of the countries with top-performing high-school students do not begin formal schooling until age six or seven," said the Joint Statement of Early Childhood Health and Education Professionals on Common Core Standards Initiative. "We must test these ideas more thoroughly before establishing nationwide policies and practices."

Moreover, educators around the country have critiqued the standards for what they call a one-size-fits-all approach to education and for not facilitating ongoing revision of the standards based on new research.

While the debate over standards continues, local educators have been tasked this school year with putting the new standards in place. Paula Smith, principal of St. Patrick School in Owego, said her staff has been working since the summer to incorporate them into classrooms.

She said the new standards are visible in teacher lesson plans. In the past, such plans consisted of a page or two, but they now run eight to 12 pages long and cite the standards from the common core that are being covered in the lesson.

Teachers look to meet the needs of the class as a whole as well as the needs created by the learning style of each student in the class, she said. Teachers informally assess students on a daily basis to see if they are grasping the material and also test them periodically on what has been covered, she said.

Some elements of the curriculum also have been reassigned to different grade levels, which has presented challenges for educators in this initial year.

With the realignment of the curricula, some parents have questioned why certain topics are being covered and others are not, Smith said. The school has conducted a series of parent meetings to explain the changes and to keep parents informed.

Websites also are available to help parents understand the new expectations. New York’s common core website, www.EngageNY.org, offers videos, activities and guides to enable parents to help their children with the curriculum. The New York State Coalition for Independent and Religious Schools provides resources for parents and information on the common core on its website, www.nyscirs.org. And the Catholic School Administrators Association of New York State has some information on its site, www.csaany.org.

The Diocese of Rochester also is encouraging parents to make use of the PowerSchool parent-school communications program, which displays a child’s daily attendance and grades, and helps parents more easily communicate with teachers.

Through this program, "parents are able to get online and see a whole lot more than they ever did in the past," Willkens Leach said.

She stressed that the implementation of the new educational standards is ongoing and will continue through next year. Frank said the department is planning some professional-development days in June to prepare teachers for the coming year.

On the whole, Willkens Leach said administrators are happy with the changes that have been happening in their schools.

"We are excited about it," she said. "When you start thinking about this new way of teaching, you start seeing the effect on kids and the excitement in the classroom, and you know this is going to be effective."