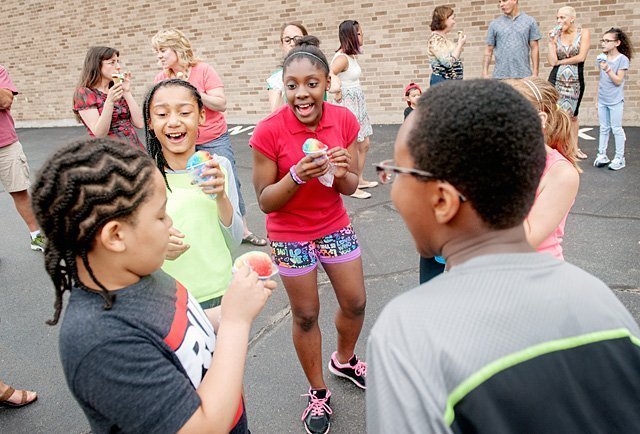 Three Monroe County elementary schools no longer will offer sixth grades when the new academic year begins next month, while three other schools will begin offering sixth grades for the first time.

Both Aquinas Institute and Bishop Kearney announced in the fall of 2014 that they would begin offering sixth grades in September 2015. These schools followed in the footsteps of Our Lady of Mercy School for Young Women and McQuaid Jesuit High School, which previously had added sixth grades to their junior-high and high-school offerings. And in November 2014 diocesan officials announced that Siena Catholic Academy, the diocesan-operated junior high, also would add a sixth grade in September 2015.

In the public-school system, the gap between fifth and sixth grades often is a time of transition between elementary and middle schools, diocesan Superintendent of Schools Anthony Cook III explained in a December 2014 Catholic Courier article.

"It was determined by Bishop (Salvatore R.) Matano and myself that to create a sixth grade at Siena would offer the middle-school opportunity not only to kids in (diocesan) elementary schools but as a way to appeal to people who want to enter the Catholic schools system at sixth grade," Cook said.

In the wake of these announcements, St. John Neumann School in Rochester, St. Kateri School in Irondequoit and St. Louis School in Pittsford decided not to offer sixth grades after the end of the 2014-15 school year. Deciding to do so was difficult, noted Jackie Senecal, principal at St. John Neumann, but school officials felt they had no other options.

"With Siena opening a sixth grade, basically we didn’t have enough enrollment," she explained.

The need to drop the sixth grade did not come as a surprise to Sister of St. Joseph Kay Lurz, principal at St. Kateri School. As early as last fall Sister Lurz knew that at least five or six St. Kateri students would be leaving after fifth grade in June 2015 to join their older siblings at Mercy, and the opening of sixth grades at Siena, Aquinas and Bishop Kearney only worsened the problem for St. Kateri and the other elementary schools dropping sixth grade.

Although Senecal said many parents and students were "distraught" to learn they’d have to leave their elementary schools earlier than they had planned, Sister Lurz said she believes these sixth-graders will thrive in their new schools. Many of them have been with their classmates since preschool, so they’re ready to find new friends in a larger environment, she said.

"If they can go and spread their wings a little bit and get a taste of middle school, I’m certain it will (stand) them in good stead," Sister Lurz said.

Yet some families are unsure whether sixth-graders are ready to become little fish in big ponds, according to Theresa Hanna, principal at St. Joseph School in Penfield, which will continue to offer sixth grade this coming year.

"Our students are very adaptable to going into the junior high, and they are very well-equipped, but our families prefer they remain in our school building because of the life skills we provide. We definitely prepare them academically as well as socially," said Hanna, who said parents appreciate St. Joseph’s family atmosphere.

Sixth-graders are an integral part of the school family at Holy Cross School in Charlotte and provide positive role models for the school’s younger students, according to Mary Martell, principal at Holy Cross. And parents at St. Lawrence School in Greece and St. Rita School in Webster voiced strong support for keeping sixth grades on those school campuses, according to Frank Arvizzigno and Mary Ellen Wagner, principals, respectively, of the two schools.

"Sixth-graders here hold a lot of leadership roles," noted Christine Kretchmer, whose daughter will begin sixth grade at St. Lawrence in September and is looking forward to helping in various roles at dismissal and lunchtime. "I just thought that would be a good confidence-booster for her. I just felt it was important to experience that role-model period."

On the other hand, quite a few parents are excited about the opportunities that will be available to sixth-graders moving to Siena, according to Martin Kilbridge, Siena’s principal. Forty-six students from 16 school districts and 17 parishes had enrolled in the school’s new sixth grade as of late June, he said, noting that nine of these students have older siblings enrolled at Siena, and 10 have older siblings that have graduated from the school. Just eight of Siena’s families chose to keep their sixth-grade students in their current elementary schools rather than enroll them in the new sixth grade, he added.