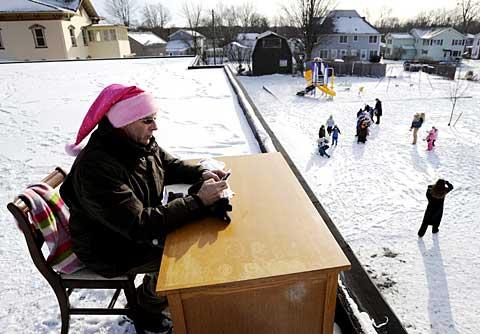 After losing a bet that his students could not collect 500 cans of food for an annual drive, David Paddock, principal of St. Michael School in Penn Yan, spent Dec. 18 working outside.

They hadn’t yet been introduced, nor had they removed their coats for that matter. Simply by walking into a large room, 35 to 40 youngsters elicited smiles and applause from their senior-citizen audience.

The setting was St. Ann’s Home in Rochester, where kindergartners and first-graders from nearby St. John Neumann School put on a mid-morning concert Jan. 13 for several dozen residents. They performed a 12-song set, with selections ranging from "When the Saints Go Marching In" to "I Am a Pizza." Upon exiting, the young singers exchanged waves with the attendees, once again lighting up their faces.

"It was wonderful, so refreshing," said Phoebe Goodheart, one of the appreciative attendees.

"I was excited to come here and sing. They liked it a lot," said Rafael Ortiz, 6, a St. John Neumann first-grader.

Twice per month, Rafael’s schoolmates interact with St. Ann’s residents as part of a yearlong service project. The positive reaction on Jan. 13 reflects the value of community service performed by St. John Neumann — which also supports such groups as Ronald McDonald House, Alternatives for Battered Women and the Salvation Army — and numerous other Catholic schools in the diocese.

"We’re very aware of the importance of giving back. There’s definitely a need for children to understand the greater world beyond," said Marilyn Zinn, principal of St. Mary Our Mother School in Horseheads, whose students regularly visit the local nursing home and support the area food pantry. For instance, Zinn noted that the school provided a special dinner this past Thanksgiving to a family that could not afford its own holiday meal.

"They were in tears," she said of the family’s members, adding that this type of poverty exists within a few blocks of St. Mary Our Mother even though the school is located near a large shopping district: "Things often aren’t what they seem."

St. Louis School in Pittsford is another place with a keen eye on those in need, having recently provided mittens and hats for Hudson Avenue Head Start and Christmas gifts for St. Joseph’s Villa. The school has a longstanding service initiative, "Heart and Home," through which clothing, household items and other materials are collected for Rochester-area charities.

St. Louis also has a focus on service in faraway lands, thanks to a project begun in 1998 that helped establish a school in Matuma, Kenya. With ongoing support from St. Louis School, the Kenya institution — also known as St. Louis — has upped its enrollment from 75 at its inception to more than 500 students today.

"My personal experience is, the more our people can connect with other people, there will be peace in the world," said St. Louis’ principal, Kathleen Carroll, who was involved in originating the Kenya project and has visited the school there. "I firmly believe if we had more people who were able or had the opportunity to interact with people they really don’t know, regardless of color or religion, they would have a greater understanding."

Diana Oravec, principal of Immaculate Conception School in Ithaca, agreed that it’s important "just to make the kids aware of others in the community who are less fortunate than them," which is why the school commits to supporting such entities as Catholic Charities and the Salvation Army. In fact, as part of Immaculate Conception’s 125th anniversary in 2009-10, students and parents are being encouraged to perform 125 hours of service during the school year.

Another creative approach to service recently unfolded at St. Michael’s School in Penn Yan. David Paddock, principal, promised his students that if they collected 300 items for a holiday canned-food drive, he’d spend an entire school day working on the roof. The deal was later amended to include Paddock singing a solo rendition of "Rudolph the Red-Nosed Reindeer" at morning prayers if the total reached 500 cans of food. Some 605 cans were eventually collected, and Paddock held up his end of the bargain on a cold but sunny Dec. 18.

"The main thing is that we are very proud of the kids; they understand the reason we did the food drive is to help others. Putting me on the roof just adds some fun," Paddock commented.