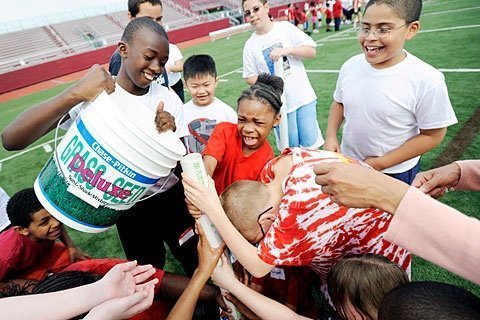 CHARLOTTE — During the 2010-11 school year, staff and teachers at Cathedral School at Holy Rosary put effort into planning special events because they knew their time with students was limited.

The Holy Rosary Church campus in Rochester where the school is located is up for sale, and on Dec. 1, 2010, diocesan officials announced that the school would consolidate with Greece’s Our Mother of Sorrows School. The merged schools will reopen at Holy Cross School in Charlotte.

Since these major changes were pending, Cathedral School at Holy Rosary Principal Kathleen Dougherty said she tried to fill the school year with fun activities ranging from roller skating, play-center outings and trips to the movies to see the film "Gnomeo & Juliet."

"I can’t tell you how many kids said they had never been to a movie before," Dougherty said. "And we are talking fifth-, sixth-graders."

Some of the last outings that the school took were a field days at Aquinas Institute on June 16 and a day at Charlotte Beach on June 10.

Teacher Sue McKernan noted that beach day was a way to introduce the Charlotte area to many of the future Holy Cross students. She said the trip also was a nice break during the middle of final exams for students.

"Our school has no air conditioning, so this truly is a breath of fresh air," said McKernan, who will retire from full-time teaching at the end of the school year, but hopes to continue in the classroom as an assistant.

Groups of students spent the morning at the beach flying kites, running and playing football, playing on the playground equipment, digging in the sand, blowing bubbles, and creating sand castles. One group of girls even created a sand replica of New York City.

The excitement about beach day reached a fever pitch on the bus ride over, students said.

"We were all very excited, and we were just screaming because we were so excited," said Abagail Eagan, a first-grader.

Field trips are just one of the students’ favorite parts of school, said Kiara Nkugwa, 7, a first-grader who is Abagail’s best friend.

First-grader Jared Eagan said that during beach day he couldn’t wait to help his friends dig a tunnel. He said the 2010-11 school year at Cathedral School at Holy Rosary has been very good.

"We learned about inches and centimeters," Jared said.

The entire school needed a dose of stress relief, said Jalon Jones, 11, who plans to go to Siena Catholic Academy in Brighton next year.

"This is our last year, and it has been tough for some of us," Jalon said. "There has been a lot of pressure on for the teachers, too, because they might not have a job next year."

Jalon said he hopes to play sports at Siena next year, but said he won’t soon forget Cathedral School at Holy Rosary.

"I have been here since kindergarten, so this school will always have a place in my heart," he said.

Jalon was among a large group of Siena-bound friends from the sixth grade. Those friends said that Cathedral School at Holy Rosary’s atmosphere sets it apart.

"I have a lot of cousins who go to public schools, and they say sometimes they get bullied," said Dathan Kimbrel-Gause, 12, who will be going to Siena next year. "I think this school is very safe. We don’t have to worry about that other stuff."

"We have great teachers at this school," said Alvaro Polanco, 11, a sixth-grader who is considering attending Siena next year. "We have a great staff and community. It’s a very well-organized school."

Lynn Harris, whose son, Emmanuel, is a first-grader at the school, said her family was first drawn to the safety offered by Catholic schools when she signed up her son to attend St. Monica School’s prekindergarten program. He wound up at Cathedral School at Holy Rosary after St. Monica closed, and next year he will attend St. Pius Tenth School in Chili.

She said her family has appreciated the values taught at Cathedral School at Holy Rosary.

"I like that it’s a faith-based program, and they really seem to care about the kids," she said.

Teacher Janet Holleran said one of the distinctive things about Cathedral School at Holy Rosary was its vibrant Masses. She said that the Masses were full of life, and all the students participated through song and movement.

The school also worked hard to create a feeling of welcome for parents, volunteers and students through open-door policies, said Holleran, who will teach third grade next year at Holy Cross.

"It has a very loving atmosphere," she said. "I’m not sure that that sets it apart (from other Catholic schools), but it makes it very special."