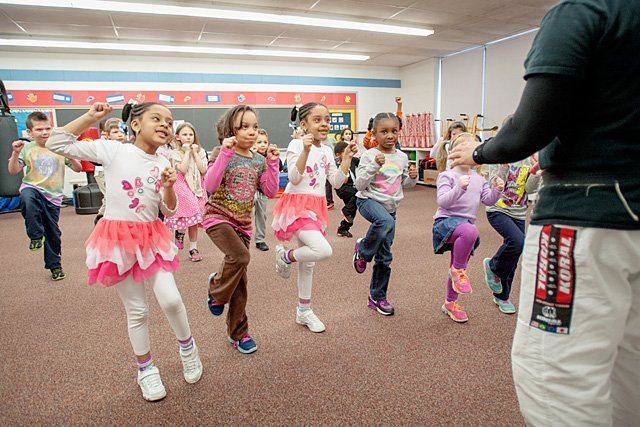 Posters promoting strong diet and exercise habits are abundant in lunchrooms, gymnasiums and hallways at both institutions. Similar efforts at heightening health awareness have been implemented at Catholic elementary schools throughout the diocese, according to Anthony Cook III, diocesan superintendent of schools.

"Our schools are looking for the best opportunities possible to appeal to families to not only grow spiritually and academically, but personally at a physical level," Cook said. He added that diocesan schools put their words in action, consistently meeting state and national standards for physical education and lunch programs.

Such efforts are targeted at reversing some disturbing health statistics. According to the Centers for Disease Control and Prevention (CDC), between 1980 and 2012, childhood obesity more than doubled (from 7 percent to 18 percent) in children ages 6 to 11 and quadrupled (from 5 percent to nearly 21 percent) in adolescents ages 12 to 19 in the United States. As of 2012, the CDC reports, more than one-third of children and adolescents were overweight or obese.

Why are greater levels of young people consuming so many more calories than they burn off?

Rick Caranddo, food-service manager at St. Pius Tenth, cited as a key factor the far-reaching lure and availability of fast food and junk food outside of school. This influence, he said, makes a tougher sell of the healthier — and often less tasty — meals he strives to provide.

"I know the ones who are exercising and who are not. As the year goes on, I can tell. We do have a percentage who just go home and play video games," he said.

"Oh, I think (electronics) plays a lot into it," added Bill Davis, physical-education instructor at St. Pius. "I have a poster — ‘Turn it off and lace it up.’ It’s one of my favorite posters." 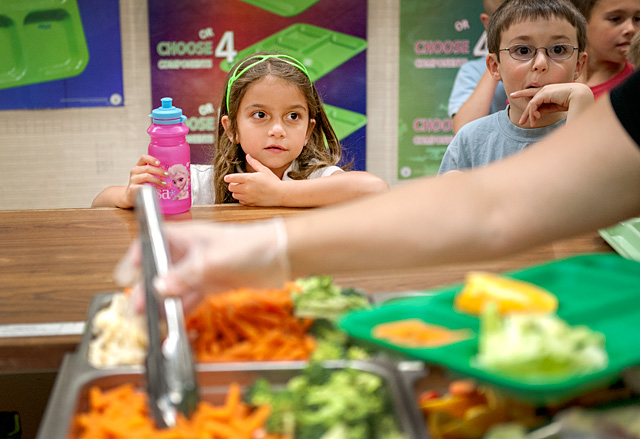 First-grader Emma Gizzi waits patiently for her serving of vegetables during lunch at St. Pius Tenth School in Chili June 19.

"This is a great way to teach them alternatives," she said. "You don’t have to play sports."

Regarding exercise outside of school time, Komorowski suggested pursuing whatever form of exercise students enjoy in order to stay motivated and meet the CDC’s recommendation of 60 minutes or more of daily exercise for children and adolescents.

"It doesn’t matter what you do for activity, as long as you’re moving," he said, adding, "If you like it, stick with it."

Davis said he strives to convince young people that increased exercise is not only worthwhile, but can actually be enjoyable.

"It’s how you feel afterward — ‘Oh, I feel great, I’ve got my blood pumping and my heart moving,’" he said.

Along with their activity levels, Catholic schools are making conscious efforts to improve children’s diets. Caranddo, for instance, said that St. Pius Tenth follows the National School Lunch Program standards, which were tightened beginning in 2012. Among the new requirements for participating schools — like St. Pius — that have full-service cafeterias are increased offerings of fruits, vegetables and whole-grain-rich foods; limiting calories; and reducing levels of saturated fat, trans fat and sodium. Senecal added that St. John Neumann, which has its lunches delivered daily by a catering company, is similarly stringent about the meal selections it orders.

"People in general are more conscious (about eating well)," she remarked.

This trend is an outgrowth of the national campaign Let’s Move! founded by First Lady Michelle Obama in 2010. The initiative seeks to combat the epidemic of childhood obesity and encourage healthy lifestyles by promoting healthier food in schools, better food labeling and increased physical activity.

Also in 2010, President Barack Obama signed a memorandum creating the Task Force on Childhood Obesity. A year later, the U.S. Department of Agriculture launched MyPlate, an updated nutrition guide emphasizing meal standards for the five food groups. Locally, the Be a Healthy Hero initiative was begun in 2007 by the Greater Rochester Health Foundation to promote sound diet and exercise habits among children.

Misty Pecorella, lunchroom supervisor at St. John Neumann, observed that increased consciousness about healthy eating has trickled down to parents of children who bring their lunches.

"I think I’m starting to see a change in the younger kids because of the educational process over the last several years," Caranddo added.

He also observed that children’s dietary habits are largely influenced by their parents’ habits: "If the parents are eating healthy at home, then generally so are the students."

In the same way, Davis said children whose parents exercise regularly are more likely to do the same.

"I think parents play a major role, and a lot of parents do a great job with it," he remarked.

Despite efforts at increased awareness, Caranddo acknowledged that developing and maintaining the self-discipline needed to stay healthy is an ongoing challenge, for both children and adults.

"It’s hard for everybody," he said, admitting that when high-fat food is available "I give in a lot myself" and that he has to remember to eat such foods in moderation.

When St. Pius Tenth first altered its menus to conform to the new national regulations in 2012, Caranddo said the number of students who purchased their lunches dropped by about 10 percent. "They didn’t like (the new food offerings) much," he said, adding that even today several students throw at least part of their healthy meals in the trash and that some even get in the snack line after doing so. "It’s frustrating," he said.

Another frustration cited is a decrease in daily casual play among children. Davis said neighborhoods are generally more sparse, whereas in yesteryear "we used to go out and play sandlot baseball and get to know each other."

More and more, Senecal added, young people opt for computers, iPods and smartphones over getting valuable exercise in nearby streets and yards.

"They were born with technology around them. We were outside playing," she remarked.

Children aren’t the only ones deterred from exercise by electronics, Komorowski stated: "We’re all guilty of it. It’s very important we start making the decision to get out and get fresh air," he said. "Facebook, Instagram — as much as I love them, (social media) is keeping us indoors."

Komorowski said he shares his concerns with St. John Neumann students in order to raise awareness about proper exercise. He added that’s he personally motivated to work toward better health due to a family member who weighs about 300 pounds and doesn’t exercise. Meanwhile, Davis said he’s driven to stay healthy not only so he can be a model for his students, but also due to a family history of heart disease and his own struggles with diabetes.

In the end, Komorowski said, the decision to adopt healthier habits lies largely within the individual.

"There’s only one person in your life who can make that change, and that’s you," he said. "If you can’t fix it by yourself, ask for help."