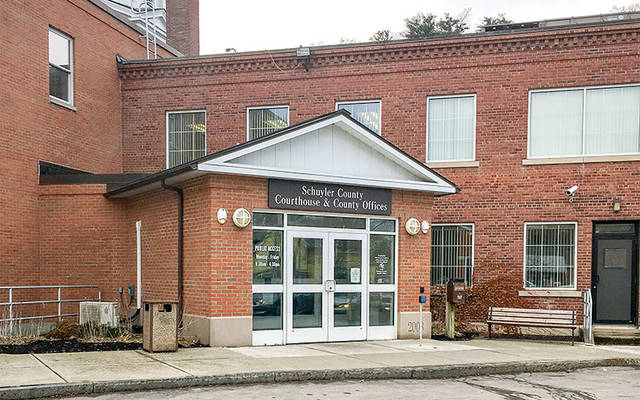 The office of Schuyler Catholic Charities has been moved to the basement of the Schuyler County Office Building in Watkins Glen.

WATKINS GLEN — At less than three blocks, this was seemingly a small move — yet the transplanted office of Schuyler Catholic Charities offers some key differences.

The agency, a branch of Catholic Charities of Chemung/Schuyler, started up in its new locale this past Jan. 9. It is situated in the basement of the Schuyler County Office Building, 105 Ninth St., Watkins Glen.

Debbie MacDonald, director of Schuyler Catholic Charities, noted the current office’s consolidation aspects: It is adjacent to Catholic Charities’ Schuyler Outreach food pantry, located at 112 Tenth St. in the parish center of St. Mary of the Lake Church. Now, MacDonald said, clients visiting one facility can easily access the other if they need assistance at both, which is often the case.

Also vital is the safety and security afforded by the county office building. Catholic Charities’ previous location was at 607 N. Franklin St. (Route 14), right on the heavily traveled main drag in the Village of Watkins Glen. MacDonald explained that many abuse victims hesitate to seek help from agencies such as Catholic Charities out of embarrassment and/or fear of repercussion, and thus require as much anonymity as possible. However, because of the former Schuyler office’s visibility, odds were much higher that clients or their vehicles could be spotted by somebody who knew them — particularly their abusers.

Schuyler Catholic Charities strives to help people embroiled in such volatile situations through its First Step Victim Services program, which provides confidential support for people affected by domestic violence. The abusive situation can be either physical, verbal, emotional or sexual in nature. Catholic Charities offers a 24-hour hotline for victims at 607-742-9629 (you may call or text) and also strives to raise public awareness of domestic violence through community events. First Step has existed in Schuyler County since 1997, making it the inaugural program for what would eventually become Schuyler Catholic Charities in 2003.

Another, more recent focus by Schuyler Catholic Charities is to help identify and assist victims of human trafficking — the recruiting, transporting, harboring or receiving of people by means of force, fraud or coercion for purposes of exploitation. Forms of human trafficking include sexual exploitation and forced labor. MacDonald and Rhodes said the extent of trafficking is wider than many people may want to believe, affecting communities throughout New York state, including their own.

Schuyler Catholic Charities additionally offers a Runaway and Homeless Youth Program, for young people ages 10 to 25 who have run away from home or are considering it. Operated in conjunction with the Schuyler County Youth Bureau, this service features the same hotline number as First Step (607-742-9629.) The program is currently seeking interim volunteer host families for these at-risk youths.

Also among Catholic Charities’ menu of services is its food pantry. Schuyler Outreach is open three days per week and offers nutrition education, pre-screening for food stamps and a mobile food pantry every first Saturday of the month from 10 to 11 a.m. Its phone number is 607-535-2815.

Yet another vital offering of Schuyler Catholic Charities is its support of people in financial need who are facing eviction, homelessness and the loss of utilities.

McDonald remarked that a satisfying aspect of her job is when people who benefit from the programs and services of Schuyler Catholic Charities end up achieving stability in their financial, work and personal lives.

“Eventually they’re able to make it on their own,” said MacDonald, who has led the agency since 2012. “And that’s a success story.”