Schuyler movie nights gets a thumbs up - Catholic Courier 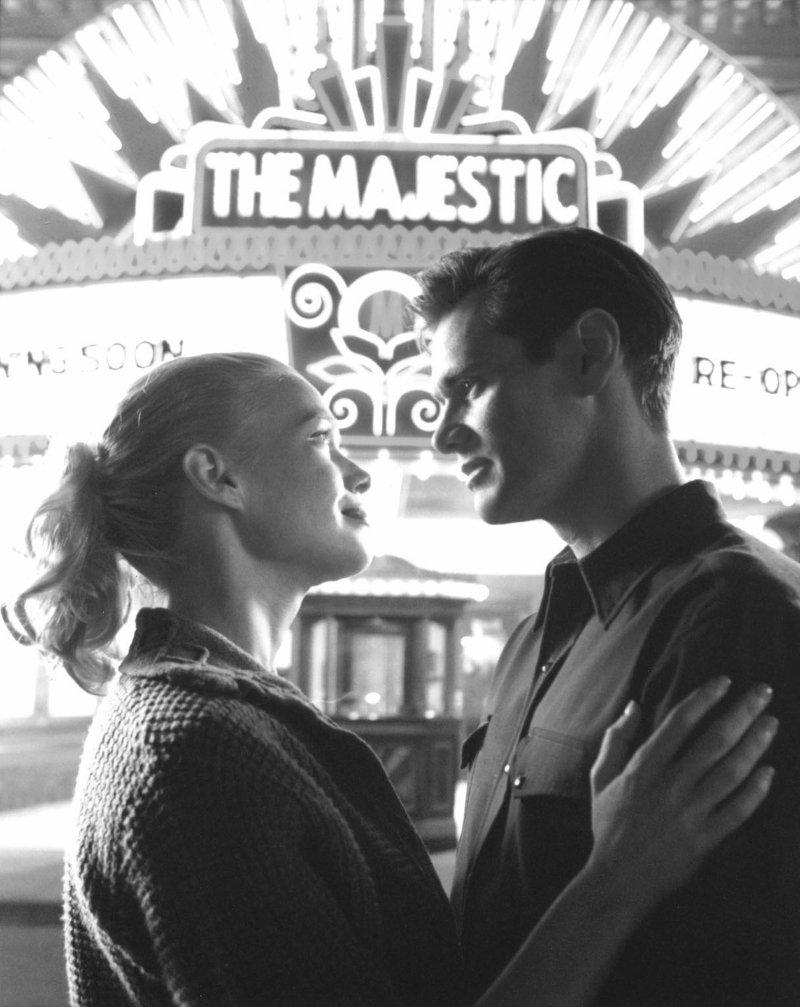 Laurie Holden and Jim Carrey play small-town sweetheart Adele Stanton and Peter Appleton, a Hollywood screenwriter who is mistaken for a missing local war hero, in the 2001 movie “The Majestic.”

WATKINS GLEN — If you long for a good old-fashioned Friday night out at the movies, there’s a new place in town that fits the bill nicely.

Located at the corner of 9th and North Decatur streets, this spot offers high-quality film fare with a price can’t be beat: free, with refreshments included.

Area residents will recognize the address as that of St. Mary of the Lake Church — and, yes, the movie locale and church are one in the same, thanks to the efforts of Father Steve Lape.

Welcome to the "Faith and Film" series launched last fall by Father Lape, first-year pastor of Schuyler Catholic Community (St. Mary of the Lake and St. Benedict, Odessa). The monthly gatherings for adults offer entertainment and the opportunity to engage in group discussion exploring each film’s spiritual significance.

On the early evening of April 24, approximately a dozen guests showed up for the 6:30 p.m. movie in St. Mary’s gathering room known to parishioners as "The Link." Most arrived early to engage in banter and enjoy such refreshments as chocolates, coffee and — of course — popcorn.

The featured presentation on this night was "The Majestic," a 2001 movie starring Jim Carrey in a rare dramatic role. His character suffers amnesia from an auto accident in the early 1950s and is taken in by residents of a small town who mistake him for a long-lost World War II hometown hero.

Kathy Decker said she enjoyed the movie because of the nostalgia it evoked and message it carried — "that happiness is all around us. We just need to reach out each day and make the decision to make that happiness happen," said Decker, who serves as secretary of the Schuyler cluster.

"The Majestic" was the fifth installment of Faith and Film. The series kicked off in November 2014 with "The Spitfire Grill," a 1996 flick about a young woman recently released from prison who arrives in a small town in Maine and tries to begin a new life. The next month’s feature was "Come to the Stable," a 1949 movie loosely based on a true story about two nuns and their quest to get a children’s hospital built.

In January the selection was "Bella," a 2006 drama about the friendship between a former soccer star and an unmarried New York waitress who loses her job after becoming pregnant by another man. A special component of the film series occurred during Lent, when "Jesus of Nazareth" — a 1977 made-for-television epic depicting the life of Christ — was shown at St. Mary on three consecutive Thursdays. Most recently, on May 22, "The Song of Bernadette" — a 1943 film about the future St. Bernadette and her Marian apparitions at Lourdes — was shown because May is a month of Marian devotion in the Catholic Church.

Film selections generally contain plots that allow viewers "to see Christ in everyday situations," Father Lape said. However, he steers away from such well-known titles as "It’s a Wonderful Life" and "Forrest Gump," opting for movies that spark a genuine learning experience. In fact, while introducing "The Majestic," Father Lape asked how many participants had seen it and no hands went up.

Also enhancing the educational experience on April 24 were several handouts: A Vatican-issued listing of important films from the last 100 years; the American Film Institute’s top 100 films; famous "firsts" in the history of motion pictures; a selected bibliography on the topic of faith and movies; and reflections from church leaders on the role of media, including a 1995 statement from St. John Paul II lauding "those who endeavor to use cinema as an authentic vehicle of culture for the integral growth of each person and of society as a whole."

Father Lape said he aims to select movies of high artistic quality, with layers of meaning that might not be apparent upon first viewing.

"It’s something that keeps on giving," he remarked, adding that he also seeks "good entertainment that’s not going to be offensive." He never shows an R-rated movie and only allows for a PG-13 film if profanity, sex and violence are minimal.

Father Lape, a movie buff since childhood, noted that during seminary he would organize film nights for fellow seminarians. He has continued to hold movie get-togethers in all his parish assignments following his 1999 ordination, saying the initiative has been so successful that other parishes have contacted him about how to start their own Faith and Film offerings.

Along with the learning aspects of the film nights, Tom Clifford noted their positive social aspects.

"I like to mingle with some of my fellow parishioners," he said before "The Majestic" began on April 24.

"It’s a nice way to socialize together," Decker agreed.