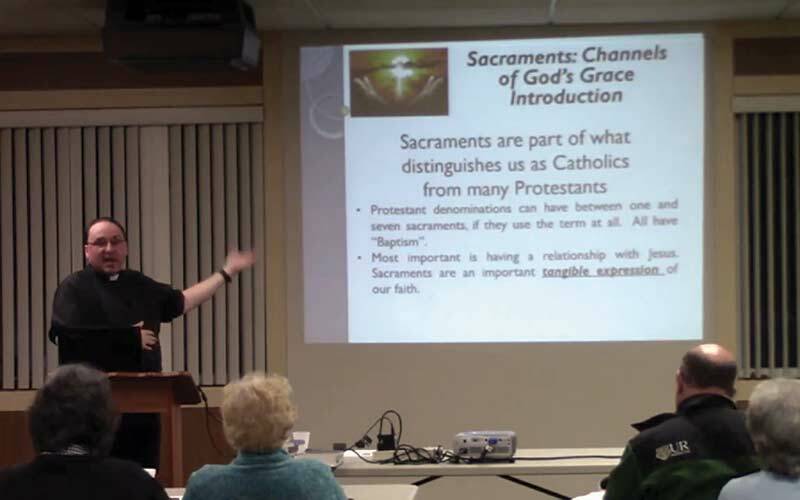 The 40 days of Lent are starting up — meaning it’s that time of year to forgo such activities as eating candy, smoking, and eating meat on Fridays and Ash Wednesday.

Whereas Father Jeffrey Tunnicliff commends these types of Lenten sacrifices, he also cautioned against approaching Lent with a strictly checklist mentality.

“How many people do the same things year after year, doing them out of habit?” said Father Tunnicliff, who serves as the first-year parochial administrator of Schuyler Catholic Community.

Rather, he emphasized the importance of recalling just why we dedicate ourselves to Lenten observances in the first place. In order to help the faithful reflect more deeply upon Lent and all that goes with the season, Father Tunnicliff conducted a PowerPoint workshop Feb. 17, “Starting Lent Right,” at St. Benedict Church in Odessa.

Father Tunnicliff explained that he scheduled the session for a couple of weeks before Ash Wednesday so participants would have ample time to plan their Lent “with some meaning behind it,” he said. However, he noted, it’s still not too late for people to view the workshop and apply it to the current Lenten season, thanks to a recorded version of his presentation that can be accessed on his website, http://www.renewaloffaith.org.

The following are some of the points that were addressed during the Feb. 17 session:

View Lenten sacrifice as a way to emulate the sufferings of Jesus on the cross, as described in Colossians 1:24: “Now I rejoice in my sufferings for your sake, and in my flesh I am filling up what is lacking in the afflictions of Christ.”

Focus on the three pillars of Lent — fasting, prayer and almsgiving. Along with giving up things, Lent also can be observed by spending extra time in prayer as well as making donations to charitable causes.

The workshop at St. Benedict Church served as the first of a four-part Lenten series, three of which are yet to come. Father Tunnicliff also is offering presentations on physical and spiritual healing; they’re set to take place March 10, March 24 and April 7 at St. Benedict. Each in-person gathering will begin at 1:30 p.m., with a webinar slated for 6:30 p.m. on Father Tunnicliff’s website. All sessions will be archived on the website within a couple of days after each is held.

Father Tunnicliff — whose Schuyler County cluster comprises St. Benedict and St. Mary of the Lake Church in Watkins Glen — noted that he does several presentations per year that can be viewed both in person and online. He said the dual format allows more Catholics to participate and from greater distances, as well as offering an option for people who aren’t comfortable being around others due to the coronavirus pandemic.

Another plus, he acknowledged, is the pleasure he derives from giving talks on various religious topics.

“The three things I like doing as a priest are celebrating Mass, hearing confession and doing this kind of thing,” he remarked.