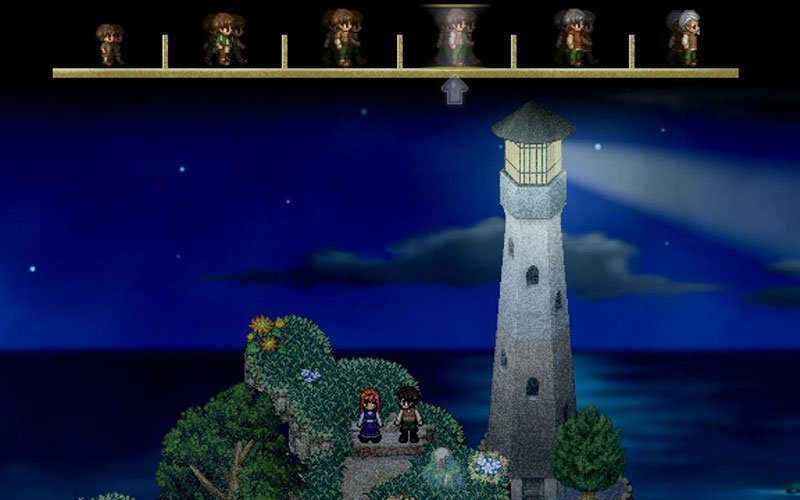 This is an image from the video game "To the Moon." The Catholic News Service classification is A-I -- general patronage. (CNS photo by Freebird Games)

NEW YORK (CNS) — Many people approach the end of their lives with at least one wish unfulfilled or with a burning regret that seemingly can never be remedied. Yet, what if the technology existed to fix such situations, even if only by way of memories?

That’s the premise of “To the Moon” (Freebird Games). This heart-wrenching tragicomedy examines what happens when two scientists — Eva Rosalene and Neil Watts — fulfill dying patient Johnny Wyles’ longing to travel to the moon by artificially re-creating his impressions of the past.

To go back through Johnny’s life, Eva and Neil collect various mementos such as a painting, sheet music or a stuffed animal, all intended to trigger memories. As they do so, they try to determine why space travel should be Johnny’s last wish — a question he himself seems unable to answer.

“To the Moon” is a predominantly story-driven title with interactive commands added almost as an afterthought to keep the player continuing through the plot. Even though gamers will spend most interactions clicking through dialogue boxes and reading — the characters are not voiced — the well-paced narrative is enthralling.

Music enthusiasts will especially enjoy the stunning soundtrack, composed by Kan R. Gao and featuring Laura Shigihara. The original soundtrack is available for purchase separately, with half of the profits benefiting autism charities.

The main gameplay can be completed in under five hours. But there are also two additional mini-episodes.

“To the Moon” is sure to spark deep introspection on the meaning of life, the interconnected relationships that form across time and the regrets some face at the hour of death. As these topics suggest, although there’s minimal mayhem on display, this may not be a good choice for sensitive youngsters.

The game contains mature themes, including mortality, and mild fantasy violence. The Catholic News Service classification is A-I — general patronage. The Entertainment Software Rating Board rating is E — everyone.