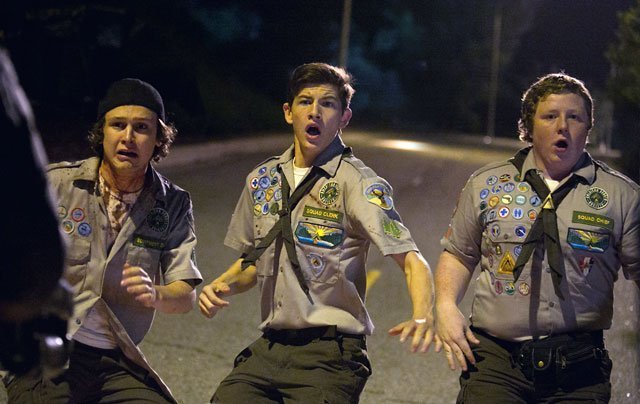 Logan Miller, Tye Sheridan and Joey Morgan star in a scene from the movie "Scouts Guide to the Zombie Apocalypse." The Catholic News Service classification is O -- morally offensive. The Motion Picture Association of America rating is R -- restricted. Under 17 requires accompanying parent or adult guardian.

NEW YORK (CNS) — Whatever its other defects — and they are legion — the blood-soaked horror spoof "Scouts Guide to the Zombie Apocalypse" (Paramount) does at least boast an accurate and descriptive title.

In other words, you can’t say you weren’t warned.

Surely you knew, going in, that what awaited you in director Christopher Landon’s disposable free-for-all would be no more than a smirking exercise in sophomoric excess? Could you have doubted the unleashing of a tide of gore, the launch of a parade of merry dismemberment?

Perhaps you thought you would escape gross-out visuals involving undead breasts and other body parts? If so, the more fool you.

Plot, you ask? Well, that’s in the title, too: A trio of teenage Boy Scouts who also are best friends — good-hearted Ben (Tye Sheridan), smart aleck Carter (Logan Miller) and overweight nebbish Augie (Joey Morgan) — battle their way through the eponymous crisis using the skills that have earned them their badges as well as such improvised but effective weapons as a weed whacker. Zombie no like.

The pals are aided by Kendall (Halston Sage), a gun-slinging, nerd-positive dropout from their high school who now makes her way in life as a stripper. To put that character description more briefly, she’s the Coolest Chick Ever!

Theme, you wonder? Um, well, the lads go on a heroic quest to save the attendees of a school dance who apparently don’t realize they’re liable to have their flesh uncomfortably munched on at any moment.

Oh, and it was wrong of Ben and Carter to ditch Augie so they could go to a cool-kids gathering to which he, poor schlub, had not been invited. Loyalty being, you see, more important than the desire to fit in with life’s winners.

As for commentary on society in general, that’s pretty well restricted to such weak gambits as Cloris Leachman’s pop-up in the role of Miss Fielder, the neighborhood’s resident cat lady from hell.

You did know, by the way, that you’d be following Augie into the bathroom after he ate those campfire-warmed baked beans. Yeah, just checking.