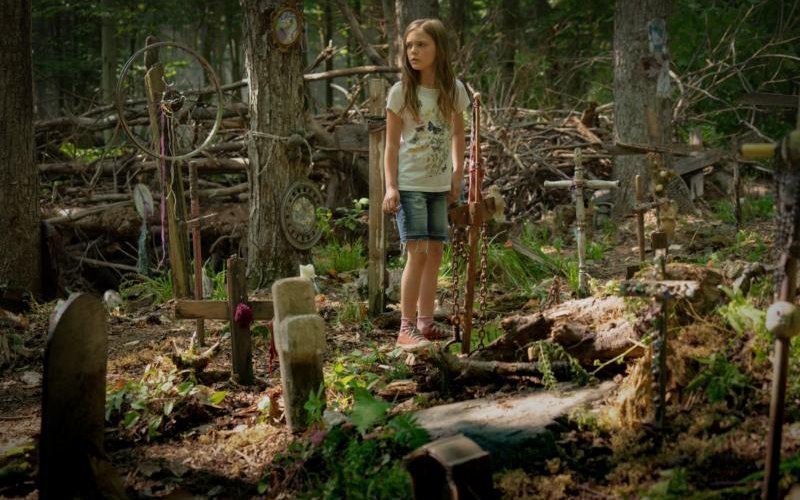 Jete Laurence stars in a scene from the movie "Pet Sematary." (CNS photo by Paramount Pictures)

This second big-screen adaptation of King’s 1983 novel — Mary Lambert helmed the 1989 version — includes some hideous sights from the start though not, initially, much in the way of bloody mayhem. But eventually screenwriter Jeff Buhler and directors Kevin Kolsch and Dennis Widmyer go in for the kill, and graphic slaughter ensues.

After relocating from Boston to a rural region of the Pine Tree State, Louis Creed (Jason Clarke), a doctor, his wife, Rachel (Amy Seimetz), and their 9-year-old daughter, Ellie (Jete Laurence) — Hugo and Lucas Lavoie play their virtually unspeaking toddler son, Gage — find themselves living near two eerie spots. One is the burial place of the title, the other a cemetery of a different kind.

Once entombed in this second locale, the dead, it seems, can emerge from it revivified. All this is explained to Louis, complete with references to Native American mythology, by the Creed’s kindly coot of a neighbor, Jud Crandall (John Lithgow), after Ellie’s cat gets run over by a passing truck. Needless to say, Jud lives to regret spilling the beans.

Kitty comes back all right, but she’s not exactly in the mood to cuddle. So when a tragic accident subsequently strikes down a family member, you’d think Louis would have learned his lesson. But no.

Early on, Louis and Rachel debate the existence of an afterlife. She’s a believer, he’s not — which may help explain his actions in the face of death. The artificially resurrected character later informs Rachel that, although there’s no heaven, there is a hell, and everyone winds up there.

Moviegoers would do well to whistle past both these graveyards and just keep going.

The film contains excessive gory violence, including torture, much gruesome imagery, a marital bedroom scene, about a half-dozen uses of profanity, a couple of milder oaths and occasional rough and crude language. The Catholic News Service classification is O — morally offensive. The Motion Picture Association of America rating is R — restricted. Under 17 requires accompanying parent or adult guardian.