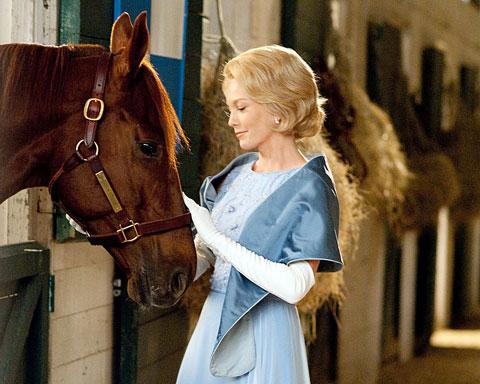 NEW YORK (CNS) — Not many Hollywood films open by quoting the Book of Job on the grandeur of horses: "In frenzied excitement he eats up the ground; he paws fiercely, rejoicing in his strength, and charges into the fray, afraid of nothing, when the trumpet sounds." (Job 39: 21-24, New International Version).

But then, not many films are as exceptional as "Secretariat" (Disney), an exuberant and inspirational retelling of the real-life story of — arguably — the greatest racehorse of all time.

"Secretariat" is more than just a rousing sports movie. Much like "Seabiscuit," "Secretariat" explores the human dynamics surrounding the animal, extolling the importance of family and the virtues of perseverance and courage. Viewers of faith, moreover, will appreciate a strong undercurrent of religious fervor.

There’s quite a saga behind the 1973 Triple Crown winner. Diane Lane plays Penny Tweedy, the nonequine lead. When her mother dies, and her father, Christopher (Scott Glenn), a prominent breeder, becomes incapacitated, Penny returns to her roots on a Virginia horse farm. Though proud and happy as a housewife, Penny rises to the defense of the failing business and assumes control.

Blessed events are about to happen to the stable’s two mares, sired by the famous stallion Bold Ruler, owned by Ogden Phipps (James Cromwell). Ogden and Christopher had agreed to a coin toss to decide ownership of the offspring, and Penny upholds the plan. Ogden wins the toss, and chooses what he thinks will prove the better racehorse. Penny disagrees, and the rest, as they say, is history.

There’s something special about Secretariat right from the start. Gentle-hearted groom Eddie Sweat (Nelsan Ellis) marvels when the foal jumps, moments after being born: "Have you ever seen that, a colt stand up so fast on his feet?"

But the road to racing success is a rocky one. Large and chestnut-colored, "Big Red" (Secretariat’s first name) is fat and lazy and branded the underdog. "He eats too much, sleeps too much, and lays against the back of the starting gate like he’s in the Caribbean," laments his hard-driving trainer, Lucien Laurin (John Malkovich).

After Penny’s father dies, the taxman cometh, and Penny is pressured by her brother and husband to sell the farm and the horses. She is determined to see through her father’s dream, juggling family commitments while battling sexism in the male-dominated horse world. At her side is her father’s indomitable assistant, Miss Ham (Margo Martindale), who rechristens Big Red "Secretariat" after her first choice, "Deo Volente" ("God Willing"), is turned down.

Nobody messes with this dynamic duo, and Penny earns a reputation for being "tough as nails." Against all odds, Secretariat emerges as a winner, and Penny’s success inspires others, especially her family.

"Secretariat" barrels towards the Triple Crown as its climax. These are re-created with skill, with the viewer plunged right into the middle of the action, dirt flying and horses heaving as the soundtrack soars with Negro spirituals.

Directed by Randall Wallace (who wrote the screenplay for the 1995 blockbuster "Braveheart"), "Secretariat" is at once a thrilling sports movie and a moving family drama. Unencumbered by any really objectionable elements, this cinematic champ can be cheered on by a wide audience.

The film contains some tense emotional moments and heated arguments. The Catholic News Service classification is A-II — adults and adolescents. The Motion Picture Association of America rating is PG — parental guidance suggested. Some material may not be suitable for children.