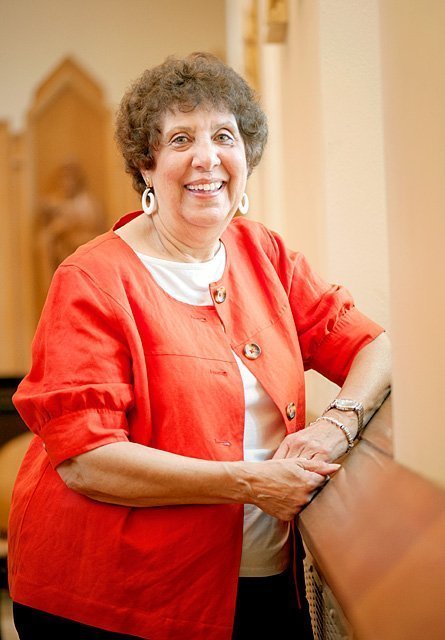 Sylvia Mancuso poses at the diocesan Pastoral Center, where she has worked in various capacities for nearly 35 years. Mancuso retired June 30.

What began as a fill-in job turned into something quite different for Sylvia Mancuso.

In September 1979, Mancuso was contacted by officials in the diocesan Tribunal about temporarily replacing a secretary who was going to have surgery. Even though Mancuso had been a stay-at-home mom for many years, she had caught the attention of diocesan officials through her strong reputation as a volunteer at Rochester’s Holy Apostles Parish.

"They called me and asked if I would come here to work," she recalled. "At first I said no, and then I relented because they called three times. I came for the eight weeks.

"And I’ve been here ever since," she added. "They asked if I would continue on, and that’s how it happened. I just kept working."

With her commitment now having stretched to nearly 35 years, Mancuso, 75, recently ranked as the longest-tenured lay employee at the Pastoral Center. That distinction ceased June 30, when she retired as administrative assistant in the Department of Evangelization and Catechesis.

"Working here was like working with a family. It was comfortable and it was rewarding. I loved working with the people," she said.

Following a six-year stint in the Tribunal, Mancuso moved to her current position in 1985. Having previously served under Mercy Sister Mary Ann Binsack, she has worked since 1989 under the directorship of Maribeth Mancini.

Mancuso has been involved in organizing countless sacramental events as well as other catechetical initiatives. She noted how the department has expanded over years, not only addressing religious-education needs but also such activities as youth ministry, Scouting, campus ministry and Catholic Youth Organization.

"The department is big, huge," she remarked.

Mancuso has taken special interest in coordinating the annual Wedding Jubilee Mass, honoring couples who have been married 25 years or more. The most recent of those liturgies occurred April 27 at Sacred Heart Cathedral, with Bishop Salvatore R. Matano presiding.

"Oh, I love that; that’s my favorite. I’ve been doing it ever since it started," Mancuso said of the wedding Mass. "The people who come are so excited."

She speaks with similar enthusiasm about her parish volunteer work, performed over a nearly two-decade period prior to arriving at the Pastoral Center. She taught religious education, conducted confirmation classes, was involved in Scouting, served as parish council president and also was president of the mothers’ club.

"I started a clothing depot at Holy Apostles, and it’s still going," she added proudly.

Mancuso observed that her parish duties had helped her transition smoothly into working for the diocese. "Even my volunteer work was church related, so (the Pastoral Center) was a comfortable place for me to be. And I love working with people, so it gave me a chance to do that."

Mancuso, a Rochester native, is a graduate of Holy Family School and Nazareth Academy. She joined Holy Apostles Parish shortly after her 1961 marriage to her husband, John, who is deceased. They raised four children as well as two adopted nieces. Mancuso now has 17 grandchildren and seven great-grandchildren, with an eighth on the way.

Much has been made of Bishop Emeritus Matthew H. Clark’s remarkable 33-year tenure as Bishop of Rochester, which concluded in 2012, but Mancuso — who began working for the diocese a few months after Bishop Clark was installed — since has eclipsed even that tally. However, she’s quite comfortable with her decision to step down at this point.

In retirement, Mancuso plans to return to her volunteer roots — "Three people have asked for me to work in their parishes," she said, laughing — as well as take a course in sign language.

Mancuso, now a parishioner of Holy Ghost in Gates, said she "absolutely" plans to maintain contact with the many current and past diocesan employees with whom she’s shared deep friendships as well as her Catholic beliefs.

"I’ve always had faith, but working with these people has helped me grow in my faith," she stated.