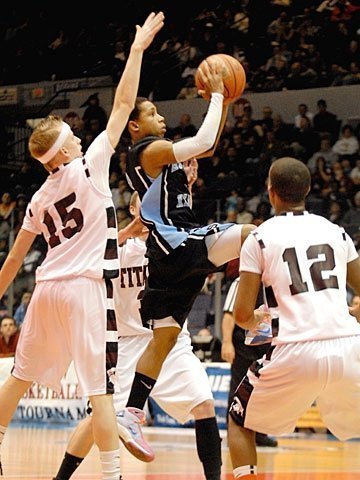 Bishop Kearney’s Redell Freeman goes up for a shot during the Class A championship game at Blue Cross Arena March 5. The Kings defeated Greece Arcadia 64-58.

The Kings earned the Section 5 Class A1 championship by scoring a 64-58 win over top-seeded Greece Arcadia on March 5. Second-seeded BK was led by Chinonso Obokoh with 22 points and 18 rebounds. BK outscored Arcadia 40-25 over the second and third quarters to go up 48-33, and withstood a late charge by the Titans.

Kearney had earned its way to the title game by winning 51-43 over No. 7 Eastridge on Feb. 26 in quarterfinal play as Obokoh had 15 points, 17 rebounds and 11 blocks. Then came a 60-49 semifinal victory over No. 3 Pittsford Mendon on March 2 as Chukwuka Ikpeze scored 23 points and Obokoh had 14.

In its 59-54 state Class A qualifier loss to Aquinas Institute on March 9, Kearney was led by Obokoh with 22 points and Antoine Anderson with 10. The Kings finished with a 17-5 record.

It also was a stellar season for the Bishop Kearney girls, who reached the Section 5 Class CC final from their No. 6 seed position. BK started out with a 55-22 first-round win over No. 11 Oakfield-Alabama on Feb. 19 as Anna Brado had 12 points and Taina Graham had 10. Next up was a 49-15 quarterfinal win over No. 3 Byron-Bergen on Feb. 23 as Lauren Kelly totaled 13 points and 14 rebounds. In semifinal play, the Kings won 56-48 over No. 7 Bloomfield on Feb. 26 behind Brado, Kelsey Buscaglia and Graham, who had 19, 14 and 10 points, respectively.