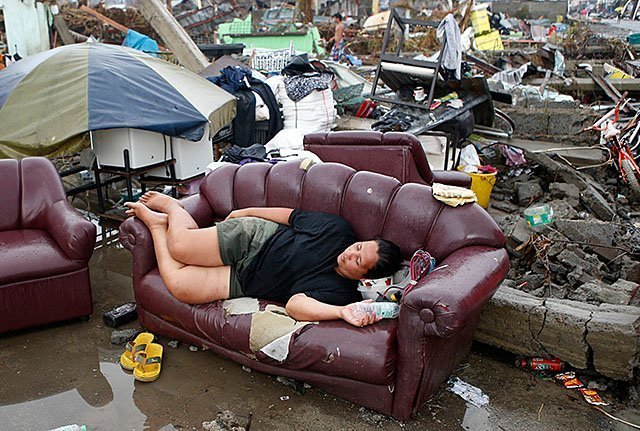 A typhoon victim rests on a sofa amid the ruins of her family's home on the central Philippine island of Leyte. Aid agencies faced challenges getting food and water to the hundreds of thousands of Filipinos affected by Super Typhoon Haiyan.

MANILA, Philippines (CNS) — International and local groups were poised to get aid to the worst-hit areas of the typhoon-stricken central Philippines, but the challenges of getting help to communities growing desperate for food and water went beyond just making sure roads were clear.

For the Jesuits who wanted to help, security was the priority.

Jesuit Brother James Lee, head of the Church That Serves the Nation, the social justice arm of the Philippine Jesuit province, said before anyone could take food and other supplies to the worst-hit areas, his organization would send someone to make sure there was a secure way that goods get to the right destination.

"Because even the military cannot pass and go to different areas," Brother Lee told Catholic News Service. "They still have difficulty with communications as well as managing the people there, because they’re (Filipinos) really looking for food, and they’re asking the trucks (for food) and limiting their access."

Brother Lee said he had heard from other nongovernmental agencies that partner with SLB, as his organization is known in the Philippines, that hungry people were demanding food in return for letting the trucks pass.

About 600,000 people have been made homeless by Super Typhoon Haiyan. In one of the worst-hit cities, Tacloban, a day after the storm hit, officials said the displaced started to loot grocery stores and shopping malls, picking them clean of food, water, medicine and even goods that were not basic necessities.

To try to restore order, the government sent hundreds of police and military backup and also imposed a curfew. But on Nov. 12, the Armed Forces of the Philippines said communist rebels ambushed its trucks on their way to Tacloban. The military said two rebels were killed in the incident.

Brother Lee explained that managing the potential danger of making a delivery would entail a step-by-step process. He said it was crucial that his organization first make contact with either another nongovernmental agency or the local parish to work out the logistics of moving the goods.

He said supplies would have to be taken in via military or humanitarian truck and as they were being transported, and an SLB representative in Manila should keep in constant contact with the local parish that would be receiving them.

"We’ll work together," said Brother Lee. "We’ll communicate how to distribute and make sure it will be very orderly and very peaceful also."

Other Catholic aid agencies also sent in people to do initial assessments. The U.S. bishops’ Catholic Relief Services sent an initial assessment team to Leyte island Nov. 10, and the first wave of staffers were scheduled to arrive Nov. 11 and 12. However, CRS staffers said a tropical depression was bringing more rain to the area hit by the typhoon.

The logistics of how to get help to people were also highlighted by the United Nations at the Nov. 12 announcement of its appeal for about $300 million to support crisis management efforts of the Philippine government.

Valerie Amos, U.N. undersecretary-general for humanitarian affairs and emergency relief coordinator, called the situation a "major emergency," saying it was at the "very top" of the U.N.’s scale for measuring the severity of various crises.

The U.N. and other aid agencies said the greatest needs were food, water, medication, sanitation, hygiene and the clearing of roads. The U.N. also spoke of the necessity of coordinating efforts of those trying to meet those needs.

In Tacloban in particular, the agency urged relief organizations to stop by its logistics center at the airport for a briefing.

The interior secretary told a local news station that aid workers who landed at the airport and wanted to help first had to speak with other nongovernmental groups and the social services department to get direction, otherwise they would find themselves standing around in the midst of one of the government’s major disaster management hubs.

With the Philippines being met with several disasters this year, including an earthquake in October and Typhoon Usagi, another Category 5 storm, in September, Manila Cardinal Luis Antonio Tagle put out a prayer for calamities Nov. 12.

The 10 lines asks for peace to those who have died, help for those who need it and that people be spared from natural disasters and devastations. It included:

"…Bless all those who extend their helping hand to those in need of food, shelter and clothing, who share their resources with others.

"At your command the wind and the seas obey, raise your hand, almighty God, and spare us from other natural disasters and devastations …."