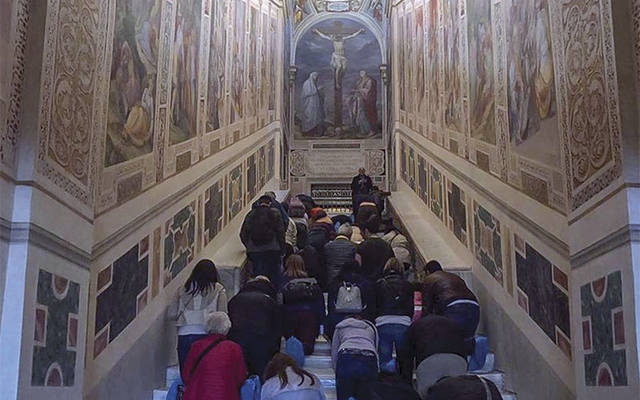 Pilgrims at the Scala Santa ascend on their knees the steps that Jesus is said to have walked up on the way to his sentencing by Pontius Pilate. (Courtesy of Aaron Kelly)

Between some close-up looks at history and a Mass with the pope, this past Holy Week season was packed with profound experiences for Aaron Kelly.

Kelly, a seminarian for the Diocese of Rochester who is currently studying in Rome, paid a visit April 13 to the Scala Santa, or Holy Stairs. They are believed to be the same steps that Jesus ascended before being sentenced to death by Pontius Pilate. The following day, Kelly attended a Palm Sunday liturgy in St. Peter’s Square, with Pope Francis serving as celebrant. One day after that, he embarked on a tour of Poland that lasted through the Triduum, retracing the steps of St. John Paul II and visiting the Auschwitz-Birkenau concentration camp on Good Friday.

The Scala Santa stairs, where Kelly’s busy stretch started out, are located across the street from the Basilica of St. John Lateran — the cathedral of the Diocese of Rome — and approximately three miles from where Kelly is studying at the Pontifical North American College. Containing 28 marble steps, the structure is said to have been transported to Rome from Jerusalem in the fourth century by St. Helena.

For many centuries, pilgrims have flocked to Scala Santa to climb the stairs on their knees. On April 11, the Scala Santa’s wood covering was removed for the first time in nearly 300 years, meaning that Kelly — who made his first visit to the historic stairs two days later — had the rare privilege of ascending the original marble steps that will again be covered up beginning June 9.

“I could not think of a better way to prepare for the beginning of Holy Week,” said Kelly, who will turn 24 on May 21 and is a parishioner of Blessed Trinity/St. Patrick parishes in Tioga County.

Kelly described his trip to Scala Santa as “a very powerful experience.” He said that upon his arrival with two fellow seminarians, they prepared for their climb by reading Gospel passages on the passion of Christ; they also prayed for the intentions of Pope Francis because an indulgence — a reduction of punishment for sins — is attached to climbing the stairs.

The staircase must be ascended in silence and on one’s knees. Kelly noted that the steps are not perfectly flat; they contain many grooves formed by multitudes of pilgrims making the climb over the centuries.

“It was difficult at first, but after a few steps you begin to get used to it and find how best to climb,” Kelly said, adding that he began his climb by praying the Chaplet of Divine Mercy and reflecting on the passion, later focusing on a fresco of the crucifixion where the stairs end.

“It was beautiful to see the faith of so many people climbing up in front of me. That inspired me to press on,” Kelly remarked.

The day after visiting Scala Santa, Kelly was in attendance at St. Peter’s Square for Mass celebrated by Pope Francis. This marked the third time that the seminarian has seen Pope Francis preside at a liturgy in person; Kelly also was on hand at the canonization of St. Junipero Serra in 2015 in Washington, D.C., and the canonizations of Ss. Paul VI and Oscar Romero this past October in St. Peter’s Square.

Following his busy weekend in Rome, Kelly headed off to Poland April 15 where he spent most of Holy Week with a group of 30 others from the Pontifical North American College. During a visit to Wadowice, the home town of John Paul II, Kelly had the honor of serving as lector during Mass at the church where John Paul was baptized and received first Communion. Another unforgettable stop occurred on Good Friday morning at the Auschwitz-Birkenau camp, where more than 1 million Jews were killed by the Nazis during World War II.

Kelly has studied at the Pontifical North American College since the summer of 2018, following two years at Catholic University of America’s Theological College in Washington, D.C. He has been a seminarian for the Diocese of Rochester since 2013.