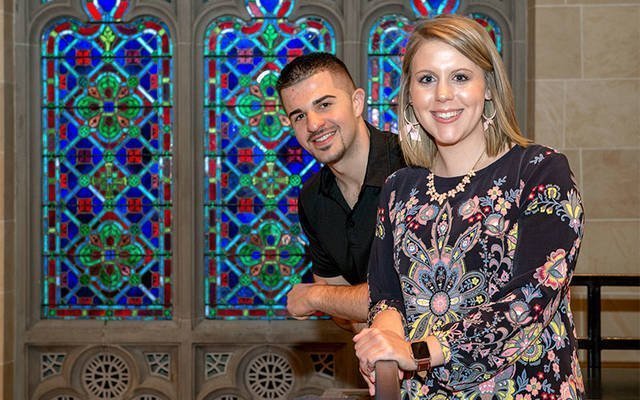 Anthony Muscatella and Abbi Kelly each have a sibling who is a seminarian for the Diocese of Rochester. (Courier photo by Jeff Witherow)

Young adults talk about their siblings’ calls to priestly ministry

ROCHESTER — For as long as Abbi Kelly could remember, her older brother, Aaron, wanted to be a priest.

“My brother has had this (priestly) calling ever since he was little,” Abbi recalled. “I have always known my whole life that Aaron has had this calling.”

Yet for James “Jimmy” Muscatella, notions of a calling to the priesthood did not become clear until just few years ago, his younger brother, Anthony, said.

“The first time he mentioned the priesthood to me was about four years ago when he was my age,” Anthony recalled. “He was 21 years old.”

Aaron Kelly, 23, entered the seminary in 2013 and is currently studying at the Pontifical North American College in Rome, while Jimmy Muscatella, 25, is set to complete his first year at St. John’s Seminary in Boston.

During the March 25 installment of the Diocese of Rochester’s Theology on Tap series, Abbi Kelly and Anthony Muscatella shared their unique perspectives of growing up as siblings of future diocesan priests.

The March 25 event was set up as a panel discussion, with Abbi and Anthony answering questions presented by Mark Capellazzi, project coordinator for youth and young-adult ministry for the Diocese of Rochester. The two began by discussing their family life and their faith upbringings, then segued into their brothers’ discernment.

Abbi, 21, said she grew up in a typical Catholic family that was involved in the faith-formation program at their parish, St. Mary Our Mother Church in Horseheads. She said her brother’s calling to a priestly vocation began when he was a kindergartner at St. Mary Our Mother School.

“His teachers would ask him, ‘What do you want to be when you grow up?’ and he said, ‘I want to be a Father.’ And my dad would say, ‘Oh, that’s so nice,’ but Aaron would correct him and say, ‘Not that father, a Father up on the altar.’”

Though he transitioned from a Catholic school to a public school, her brother’s calling persisted, Abbi said.

“I don’t think there was a point where he was like, ‘I don’t know if I want to do this anymore.’ He just kind of always knew,” she remarked, noting that her family, which also includes younger sister Emma, was very supportive of his calling.

Like the Kellys, the Muscatella brothers grew up attending weekly Mass with their parents at St. Jude the Apostle Church in Gates and were involved in the religious-education classes there.

“Our faith was important to us, but we weren’t on our knees all day praying,” noted Anthony, who is an associate special education teacher at BOCES’ Bird Morgan School.

Anthony, 21, recalled when Jimmy first shared his thoughts about becoming a priest while he was pursuing an education degree at Roberts Wesleyan College.

At the time, Anthony said that he wasn’t taking his faith seriously, which led him to oppose his brother’s calling. He said that through the prayers of Jimmy and others, his heart was changed. He added that he’s very grateful that his brother is in seminary, because the priesthood “is the true calling for him.”

Though they don’t get to see their brothers often, Abbi and Anthony said they remain close to their siblings, talking or text messaging with them daily, and keeping them in their prayers.

“My brother is my best friend,” said Abbi, who visited Aaron in Rome during her college’s spring break in March. “This has made my brother and I closer. I value my relationship more now.”

“Growing up, me and Jimmy were always best friends,” Anthony agreed. “Even though he’s out in Boston, I feel we are closer now.”