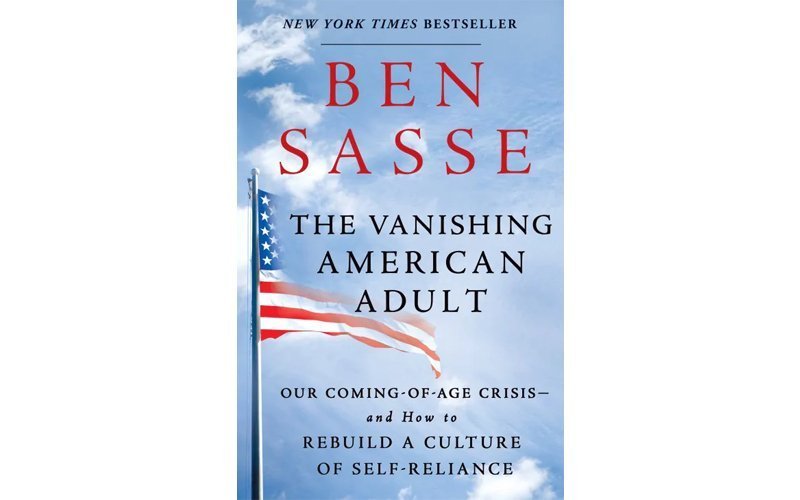 This is the cover of "The Vanishing American Adult: Our-Coming-of-Age-Crisis -- and How to Rebuild a Culture of Self-Reliance" by Ben Sasse. It is reviewed by Patrick T. Brown. (CNS)

There are two subjects U.S. Sen. Ben Sasse, a Republican from Nebraska, deems off-limits while analyzing what he calls “America’s coming-of-age crisis”: sex and politics.

Everything else, seemingly, is fair game. Contemporary approaches to education, the workplace, media consumption, travel, child rearing and more come in for critique for contributing to a culture of “endless adolescence.”

Sasse worries we’ve become less intentional about inculcating a sense of personal responsibility or work ethic — something he sees as dangerous for a nation built on self-governance. “Leaving childhood ‚Ä¶ (used to be) a gift that older generations gave to the younger,” he writes. “No longer.”

One-half cultural analysis, one-half parenting manual, The Vanishing American Adult avoids becoming the kind of anti-millennial jeremiad it could have become in the hands of a less optimistic writer.

To be sure, Sasse worries plenty about the habits and ethics of the next generation. Yet he stresses the fault is not theirs alone. Ever since the rise of the baby boomers, he argues, America has placed more emphasis on consumption than production, families are no longer incubators of material and moral stability, and the fractured transience of pop culture has replaced any unifying narrative or sense of the permanent.

These changes call for “alternative ways of building long-term character in an era when the daily pursuit of food and shelter no longer compels it,” Sasse writes. The corn-fed heartland values that he sees as being fundamental to the American character until the end of the 20th century can no longer be assumed. “This time really is different. This is almost a re-founding moment in American life.”

If there was an award for most interesting man in the Senate, Sasse would be on the short list. Holder of a doctorate in history from Yale, the consultant-turned-college-president-turned-senator went viral online after spending a Saturday night getting to know his constituents by working as an undercover Uber driver. His decision, detailed in the book, to send his 14-year-old daughter to a cattle ranch for a summer also led to national attention.

His golden-retriever-type earnestness is infectious as he gleefully questions the conventions of modern-day childrearing. Homeschooling parents, in particular, will appreciate his rigorous attacks on John Dewey, age-based segregation and the industrial model of public education.

At other times, readers may not be on board. A sitting senator will undoubtedly find it easier to take his 10-year-old to work with him than a middle manager in corporate America. The example of Sasse and his wife observing a friend give birth just for the educational experience seems unlikely to catch on. And the heavy importance he places on work for children might lead some to worry about raising uncritical participants in exploitative economic systems.

But even if his entire six-step program isn’t implemented wholesale, any part of the second half of The Vanishing American Adult will encourage readers interested in inculcating intellectual curiosity in themselves or their families. Sasse’s goal — to arrest the production of a nation of “Peter Pans,” unable to truly grow up — is more than a passion project. He sees it as a moral imperative.

“Tragically, we’re in the process of abandoning our children to Neverland, blissfully unaware of their past or their future, living only in a smothering present. It is nothing short of a national existential crisis,” he writes.

The subjects Sasse leaves to the side support his stated goal of starting a conversation at the family, not policy, level. The dots between changes in social attitudes toward sex, family breakdown and societal challenges are begging to be connected, but perhaps that will be left to a sequel. Politics, too, lurks in the background, but he takes great pains to try to avoid turning the discussion into a left-right food fight.

From that perspective, then, The Vanishing American Adult is a success. Whether readers are predisposed to agree with Sasse on the extent of the “crisis” he sees will shape how much of the cultural analysis resonates. But the suggestions for building intellectual curiosity and breaking past the unthinking acceptance of cultural conventions should be intriguing to a wide audience interested in promoting values of work, family and community.

Brown is a graduate student at Princeton University and former associate editor of The Monitor, the newspaper of the Diocese of Trenton, N.J.