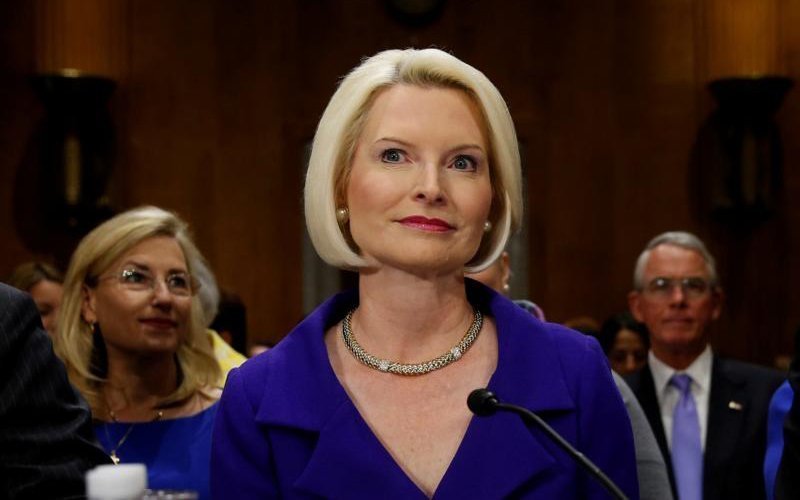 Callista Gingrich is pictured during a U.S. Senate Foreign Relations Committee confirmation hearing in Washington July 18 after being nominated by President Donald Trump to be the U.S. ambassador to the Vatican. The U.S. Senate late Oct. 16 voted to confirm Gingrich, wife of former House Speaker Newt Gingrich. (CNS photo by Jonathan Ernst/Reuters)

WASHINGTON (CNS) — The Senate confirmed Callista Gingrich as the new U.S. ambassador to the Holy See.

Gingrich, 51, a lifelong Catholic and a former congressional aide, has been president of Gingrich Productions, a multimedia production and consulting company in Arlington, Virginia, since 2007.

She was expected to present her credentials at the Vatican in the coming weeks.

Gingrich’s associates welcomed the vote. Among them was Msgr. Walter R. Rossi, rector of the Basilica of the National Shrine of the Immaculate Conception in Washington, where Gingrich has been a longtime member of the choir.

“Callista has been part of our shrine family for two decades and so, as any family rejoices when good news arrives, we rejoice with Callista,” Msgr. Rossi said in an Oct. 17 statement. “Both Callista and Speaker Gingrich are wonderful supporters of our ministry here at Mary’s shrine, most especially our music program.

“More importantly, Callista has a great love for the church and our country,” he added. “Her faith is an integral part of her life and I am confident that her faith will be her solid foundation as she enters a new service to church and nation.”

The Bethlehem University Foundation wished Gingrich “great success in her new role.” The Gingrichs have been foundation patrons, serving as advisers to its executive director and donors.

During her confirmation hearing July 18, Gingrich emphasized her desire to work with the Vatican to protect religious freedom and human rights, fight terrorism and human trafficking, and seek peaceful solutions to international crises.

Gingrich also explained under sharp questioning that the U.S. wanted to be a leader in addressing environmental issues despite initiating efforts to withdraw from the Paris climate agreement. She said the White House was committed to sustaining “our clean air and our clean water.”

“We are all called to be stewards of the land,” she said, echoing a common theme expressed by Pope Francis.

In 2010, Gingrich’s company released the film “Nine Days That Changed the World” about St. John Paul II’s nine-day pilgrimage to Poland in 1979 and how it played a part in the fall of communism in Europe. She also has written the “Ellis the Elephant” children’s American history series and co-authored “Rediscovering God in America.”

Gingrich graduated from Luther College in Decorah, Iowa, in 1988, majoring in music, a passion that has remained with her throughout life. She served as a congressional aide for more than 30 years.

She is the third woman to serve as ambassador to the Holy See after Lindy Boggs, who held the post from 1997 to 2001, and Mary Ann Glendon, who served in 2008-2009. Gingrich succeeds Ambassador Ken Hackett, who retired in January.