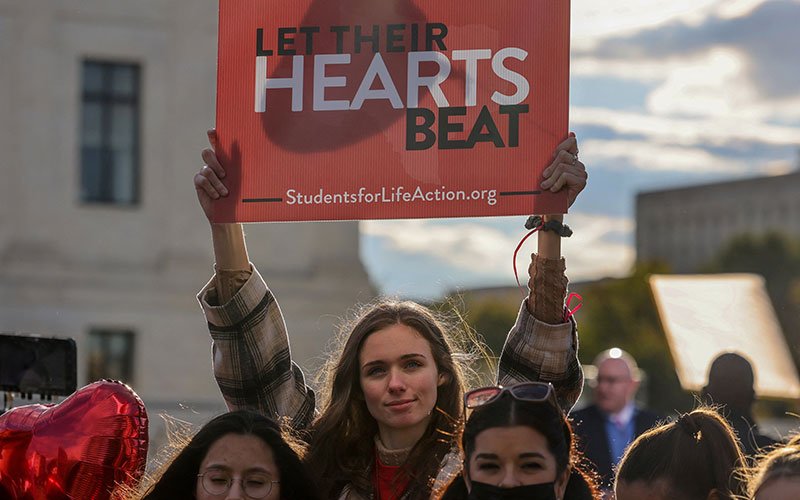 WASHINGTON (CNS) — The failure of the U.S. Senate Feb. 28 to advance an “extreme measure” to establish a legal right to abortion at any stage of pregnancy nationwide “is a tremendous relief,” said the chairmen of the U.S. bishops’ pro-life and religious freedom committees.

“We must respect and support mothers, their unborn children and the consciences of all Americans,” the committee chairmen said in a joint statement, noting a provision in the bill likely would not have protected the conscience rights of health care providers who object to abortion.

Passing the Women’s Health Protection Act, also known as H.R. 3755, “would have led to the loss of millions of unborn lives and left countless women to suffer from the physical and emotional trauma of abortion,” said Archbishop William E. Lori of Baltimore, chairman of the U.S. Conference of Catholic Bishops’ Committee on Pro-Life Activities, and Cardinal Timothy M. Dolan of New York, chairman of the USCCB’s Committee for Religious Liberty.

In a 46-48 vote, the Senate failed to approve a procedure known as cloture — which limits debate and ends a filibuster in order to move to a vote on a bill. Sixty votes were needed for cloture.

In addition to codifying Roe v. Wade, the 1973 Supreme Court decision legalizing abortion nationwide, the bill would have eliminated pro-life laws at every level of government — including parental notification for minor girls, informed consent, and health or safety protections specific to abortion facilities.

“H.R. 3755 also would have compelled all Americans to support abortions here and abroad with their tax dollars,” a USCCB news release said. “(It) would have also likely forced health care providers and professionals to perform, assist in, and/or refer for abortion against their deeply held beliefs, as well as forced employers and insurers to cover or pay for abortion.”

“Rather than providing comprehensive material and social support for a challenging pregnancy, H.R. 3755 fails women and young girls in need by instead offering a free abortion as the ‘solution’ to their difficulty,” Archbishop Lori and Cardinal Dolan said in their statement.

“Women deserve better than this. We implore Congress to promote policies that recognize the value and human dignity of both mother and child,” they said.

Supporters of the bill want to codify Roe in the likelihood the U.S. Supreme Court will overturn the nearly 50-year-old decision when it hands down its ruling in Dobbs v. Jackson Women’s Health Organization, a case involving Mississippi’s ban on most abortions after 15 weeks of pregnancy. The decision is expected in June or July.

If Roe is overturned, the court decision will leave abortion laws to the states.

After the House vote, U.S. Rep. Rosa DeLauro, D-Conn., called on the Senate to Pass the Women’s Health Protection Act., saying that the Mississippi case “is a product of Republican attacks on reproductive rights spanning decades.”

If Roe is overturned, the court will be “depriving individuals across the country of their right to choose to have an abortion,” said DeLauro, a Catholic.

In a Feb. 23 letter to every U.S. senator, Archbishop Lori and Cardinal Dolan urged them to vote against this “radical bill” to legislatively enshrine “the killing of defenseless, voiceless human beings.”

“As Pope Francis stated regarding unborn children, ‘Their killing in huge numbers, with the endorsement of states, is a serious problem that undermines the foundations of the construction of justice, compromising the proper solution of any other human and social issue,'” they wrote.

Archbishop Lori and Cardinal Dolan emphasized that the Catholic Church, “through its numerous institutions and programs,” consistently affirms and supports every human life “regardless of its condition or stage of development.”

“This is why the church supports a robust social safety net for persons who are poor or otherwise experiencing hardship, supports the dignity and rights of migrants, and opposes the death penalty,” they said.

“And this is the reason why the church supports, helps staff and fund pregnancy-help centers and ministries,”” the prelates added.

This also is why, they said, the U.S. bishops launched “Walking with Moms in Need,” a nationwide initiative “to engage every Catholic parish in providing a safety net to ensure that pregnant and parenting moms have the resources, love and support they need to nurture the lives of their children.”

Editor’s Note: The text of the letter from Archbishop Lori and Cardinal Dolan can be found at https://bit.ly/3tnQBG8.

Tags: Abortion
Copyright © 2023 Catholic News Service, Inc. All rights reserved. Linking is encouraged, but republishing or redistributing, including by framing or similar means, without the publisher's prior written permission is prohibited.