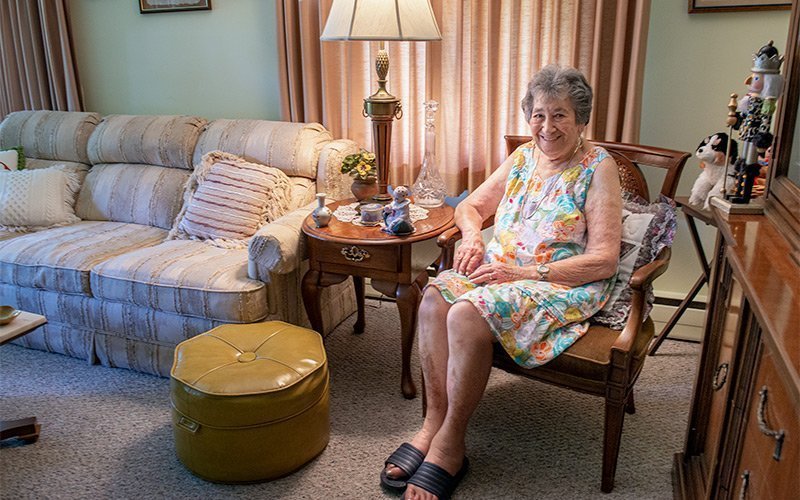 SENECA FALLS — The world today is quite a bit different than it was when Maria Corris was born in 1919.

Nonetheless, Corris seems to have navigated the changes around her with ease, albeit some have been met with more reluctance than others.

“This technology is driving me nuts,” Corris told the Catholic Courier as she waved her smartphone in the air.

Corris, who still lives in her own home, also was the guest of honor at a large birthday bash thrown by her family.

“They gave me this big party with over 100 people at the Quality Inn,” Corris said as she thumbed through a large stack of photos from the event. “It was like a family reunion.”

Family members traveled to Corris’ party from as far away as Hong Kong, and a contingent came from her old stomping grounds in the New York City area.

Corris was born and raised in Greenwich Village, where she lived with her parents, Anthony and Luisa Lopo, and two younger sisters in a three-story tenement house. The house had a tendency to hold in the heat in the hot summer months, she said.

The family eventually moved to the Bleeker Street neighborhood of Manhattan.

“All the stores were there. There were no shopping centers in those days,” Corris recalled. “They had horse-drawn carriages, and I remember somebody bought a car and we were all very excited to see this car. You had to crank it to start it.”

Corris liked to draw and initially went to fashion school, but quit and began working in the New York City office of the Figurettes company, which sold girdles. She did a little modeling work on the side, worked a lot of overtime at her office job, and by May of 1955 had saved up enough money to buy a brand-new Ford Fairlane.

“I said, ‘I’ve got to go someplace with this,’” she reminisced.

With a friend riding shotgun, she drove to Mexico City, stopping along the way to take in the sights in Williamsburg, Va., New Orleans and several other cities.

“There were no highways then. It took a week to get down there,” Corris explained.

Corris’ eyes lit up when she talked about that trip, which is just one of the many excursions she’s taken in her lifetime. She’s traveled throughout the United States and also has visited more than two dozen countries throughout Europe, Asia and other parts of the world. Many of those trips were taken with friends when she was single, and some were taken after she married Calvin Felicetti in 1963 and moved to Floral Park on Long Island.

Felicetti died of a heart attack on the couple’s fourth wedding anniversary, and Corris took a job working in the office of Travel Holiday magazine. In 1985 she married Charlie Corris, and in 1996 the couple moved to Seneca Falls to be near his daughter.

Her lifestyle in Seneca County was much different than what she’d been accustomed to in New York City and on Long Island, but she was happy, she said. Corris and her husband, who passed away in 2005, enjoyed fishing and volunteered at the Sampson Memorial Naval and Air Force Museum in Romulus.

Corris doesn’t travel very far these days, but she still loves to drive her 1996 Lincoln. She goes to lunch with her girlfriends once a week, attends Mass every weekend and participates in numerous parish activities.

“Any time there’s something going on, she’s there. You would think she was 80 years old,” noted Father Jim Fennessy, pastor at St. Francis and St. Clare Parish.

Corris is thankful for her good health and for the great variety of things she’s experienced in her lifetime.