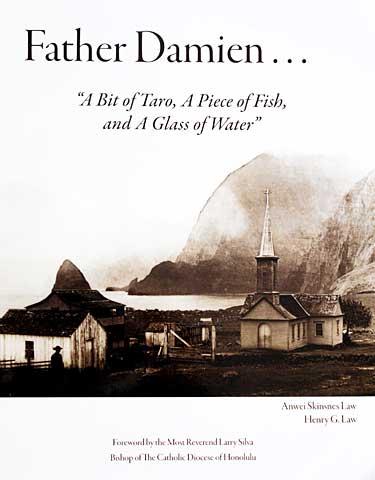 Local authors Anwei and Henry Law’s recent book, Father Damien … ‘A Bit of Taro, A Piece of Fish, and A Glass of Water,’ is more than a book about St. Damien de Veuster of Molokai. It’s a book about leprosy and the disease’s effect on the people of Hawaii, and especially those who lived in Kalaupapa on the island of Molokai.

"Father Damien has always been regarded as the center of their history. If you read other books on Kalaupapa and their history, it’s all about Father Damien," explained Anwei Law, who with her husband, Henry, resides in Seneca Falls.

Father Damien de Veuster, a Belgian missionary, was ordained in Honolulu in 1864 and in 1873 arrived in Kalaupapa, which at the time was a settlement for Hawaiians with leprosy. Men, women and children who were diagnosed with leprosy were taken from their families and sent by boat to the island and were not allowed to return to their own homes and communities. The Belgian priest ministered to people there for 16 years before dying of leprosy himself in 1889 at the age of 49.

"He invites us to open our eyes towards the ‘leprosies’ that disfigure the humanity of our brothers and sisters and that today still call, more than for our generosity, for the charity of our serving presence," the pope said during the canonization Mass, which more than 40,000 people attended, according to CNS.

"You really see the impact that this man has had on people," Anwei Law said. "He stood up for what was right. He knew what he needed to do. He just loved the Hawaiian people."

The Laws’ book is not the first to be written about St. Damien, and it’s not likely to be the last. It is, however, the only book the Laws know of that focuses on the viewpoints of the people with leprosy St. Damien lived amongst, Anwei Law said. The Laws’ book presents the story of St. Damien as told through the letters and testimonies — passed down through oral histories — of the people who knew him.

"We were trying to bring the voices of the people who had leprosy back into the story of Father Damien," Anwei Law said.

Although much has been written about St. Damien and about leprosy, which is now called Hansen’s disease, the voices of the people affected by this disease have been conspicuously missing in written history, Bishop Clarence Silva, bishop of the Diocese of Honolulu, noted in the forward to the Laws’ book.

"Even though they wrote hundreds of letters and petitions and provided eye-witness testimony to the historical events of the 19th and 20th centuries, their perspective simply hasn’t been included in the traditional histories," Bishop Silva wrote in the foreword.

Throughout history, the voices of those with leprosy have been discounted as unimportant, Anwei Law said. This discrimination continued even after the 1940s, when the first cure for leprosy was developed, she said. Even well-respected doctors and lawyers have faced discrimination after contracting the disease, she noted.

"People thought when you got this disease you no longer had any credibility … as a human being … and you’re worth nothing anymore. People are people, no matter if you have leprosy or not," Henry Law said.

"In every religion and culture, men, women and children have been discriminated against," Anwei Law added.

This discrimination still exists today, but she and her husband hope their new book will be a weapon against such discrimination. Their inclusion of the voices of people who’ve actually lived with the disease leaves less room for misinterpretation, she said.

"When people’s voices are included, they are able to define themselves rather than be limited by the imagination and perceptions of others who did not know them," she said.

The Laws have long advocated for people who’ve dealt with leprosy. Anwei Law’s father was a leprosy researcher, and she became interested in the disease at a young age. In 1977 she moved to Kalaupapa to continue her own research, and there she met Henry Law, who was working as an architect for the National Park Service. The couple lived in Kalaupapa for several decades before moving to Seneca Falls several years ago.

The couple still visits Hawaii several times a year and is active within the International Association for Integration, Dignity and Economic Advancement, which is the largest international advocacy organization by and for individuals who’ve faced the challenges of leprosy. Proceeds from the sale of Father Damien will be donated to IDEA, Henry Law said.

"We’re just saying that the discrimination and the labeling of people really has to stop," Henry Law said.

EDITOR’S NOTE: The Laws’ book may be ordered online for $25 at www.fatherdamienmolokai.org, or by sending a check payable to IDEA to PO Box 651, Seneca Falls, NY 13148.