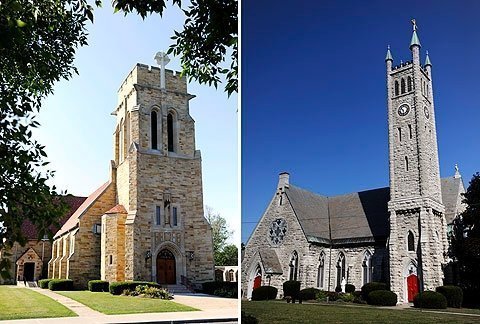 Members of St. Mary Parish in Waterloo and St. Patrick Parish in Seneca Falls were less than thrilled when they learned in June that Bishop Matthew H. Clark had selected St. Francis and St. Clare Parish as the name of their new, combined community.

"People look at it and say, ‘Gee, we already had two names. Why are we going to be St. Francis and St. Clare. Isn’t that two names?’" remarked the parish’s pastor, Father Jim Fennessy.

"I have heard comments like, ‘Why did they give us two new saints? I like the old saints that we always had better. Which church will be St. Francis and which will be St. Clare?’" added Lena Shipley, pastoral associate. "The creation of a new entity was not easily understood by all at first."

But in the months since parishioners learned about their new name, many have come to realize that St. Francis and St. Clare, both of Assisi, actually are fitting patron saints for the Waterloo and Seneca Falls parishioners, Father Fennessy said.

St. Clare, who founded the Order of Poor Clares, was the first woman to write a monastic rule, or way of life, for a religious order. Thus hers is a perfect name for a parish partially located in Seneca Falls, which is often referred to as the birthplace of women’s rights, he said. Further, both St. Francis and St. Clare were born into wealthy families but renounced their wealth and gave their possessions to the poor, he said, noting that the St. Mary and St. Patrick parish communities both have long histories of helping the poor.

"We realized that we have always emulated the virtues of Francis and Clare. Both St. Mary’s and St. Patrick’s have been committed to social justice and the needs of the poor for many years," Shipley said, citing as an example the parishes’ Nicaragua Project, through which parishioners send donated goods to poor people in the Latin American nation. This year the project was particularly successful, as parishioners gathered and shipped more than 1,300 boxes of donated items as well as desks, chairs and rototillers, Father Fennessy added.

In fact, the two parishes’ social-ministry committees were the first groups to merge when St. Mary and St. Patrick began the clustering process years ago, he said. The process began in 2004, said Shipley, who served as cochair of the parishes’ pastoral-planning committee with Marie Leo, faith-formation coordinator.

"We went into it thinking it was going to be very exciting, and it was very exciting. We didn’t have anything like the challenges we thought we would have," Leo said. "Our towns have been very strong sports rivals. We kind of expected to feel a lot of that, and we really didn’t."

Shipley, Leo and their fellow committee members tried to keep parishioners abreast of the situation at every turn. They printed a series of questions and answers in the bulletins, held town meetings so parishioners could discuss their concerns and let parishioners know when to expect certain developments.

"There were bumps in the road, but in the end everyone landed on the same page," Shipley added.

In the beginning quite a few parishioners were skeptical and fearful that one of the churches would be closed, especially when the parishes officially clustered in 2007. Their new pastor, Father Fennessy, and planning-committee members assured parishioners neither building would be closed, but parishioners didn’t believe it until they saw their pastoral leaders taking good care of both properties, Leo said.

"We were trying to get the debt down for one parish, and we were repairing roofs on all buildings. You could just tell that there was a concern from our pastoral leaders and our pastoral council that both of the facilities be maintained," she said.

Once those fears of a closure were quelled, the process moved forward rather smoothly. People got to know each other better and forge friendships as the parishes’ ministries and committees merged one by one, Leo said.

"Now parishioners have settled in. They are confident and supportive of the new entity," Shipley added.

The members of that new entity, St. Francis and St. Clare parishioners, now seem willing and able to recognize each other’s gifts and talents, Father Fennessy noted . And since the St. Mary and St. Patrick church buildings will retain their individual names, the parish now has four patron saints, Leo added.

"We’ll get used to it. We’ll begin to explore these patron saints and create celebrations around it and just create some history," she said.

Tags: Seneca County News
Copyright © 2022 Catholic Courier, Inc. All rights reserved. Linking is encouraged, but republishing or redistributing, including by framing or similar means, without the publisher's prior written permission is prohibited.