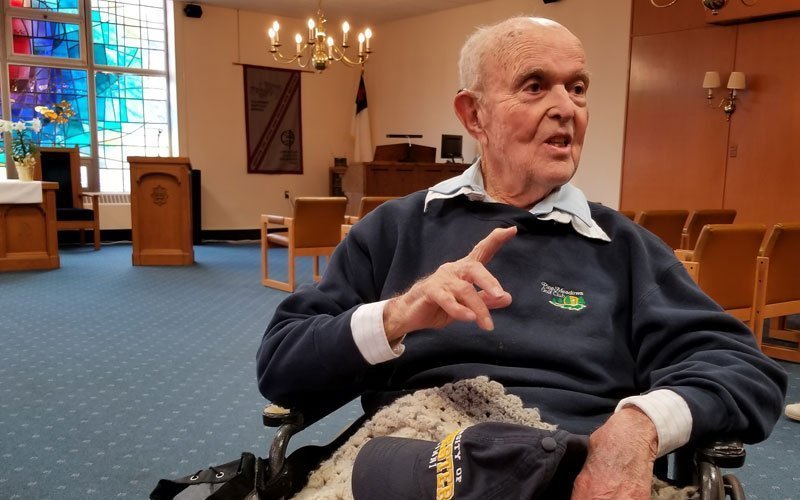 John "Jack" Reinhardt, 95, is a World War II veteran, a lifelong Catholic and a dedicated volunteer. Staff writer Jennifer Burke talked with him April 10 for an article that will be published in the Catholic Courier's May edition.

This week I’ve had the privilege of interviewing four nonagenarians. Three are celebrating 65 years as priests, and the fourth is a World War II veteran and lifelong Catholic who last week was honored for his volunteer work at Fairport Baptist Homes, where heresides.

I love listening to people of all ages tell their stories, but I’m especially fascinated by the life experiences of those who are several decades older than I am. On April 10 I was lucky enough to spend an entire hour listening to John “Jack” Reinhardt talk about hislife. I set up the interview with him at the suggestion of Fairport Baptist Homes’ chaplain, who last week presented Jack with an award for his volunteer service at the residence’s weekly Catholic Mass.

Jack, 95, has been serving in various liturgical roles ‚Äì including that of altar server, lector and usher ‚Äì ever since he was in second grade. During the course of our conversation, I also learned he occasionally served at Mass while he was serving our country in thearmed forces during World War II. Service has been a way of life for Jack for decades, just as it has been for the three priests I interviewed this week.

As much as I loved listening to these men tell their stories, I realized that I also enjoy acting as an avenue through which they can share those stories with even more people. My hope is that these stories might inspire younger people ‚Äì including myself. Service opportunities are fairly easy to come by as a teen, but as we grow up it can be easy to become focused on other priorities, especially families and jobs. These men reminded me to never stop serving, and I thank them for that.