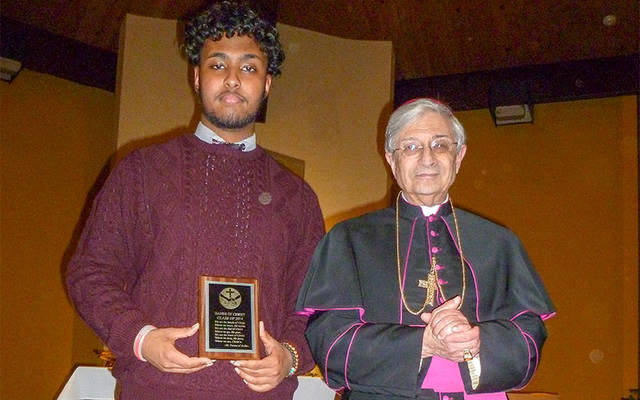 Serving one’s parish, school and community is all about making the world a better place, said high-school senior Kidane Malik.

“(It) isn’t about you,” said Malik, a student at Greece Arcadia High School. “It’s about acting in persona Christi. So, we are all here on this planet imperfectly and beautifully human to act as faithful servants.”

In February, Malik was among the 500 high-school seniors who received Hands of Christ Awards from the Diocese of Rochester. The awards are presented annually to seniors who are actively involved in their parishes, schools and communities; demonstrate Christian attitudes; and are positive role models for others.

Malik received his Hands of Christ Award during a Feb. 12 ceremony at St. John of Rochester Church in Fairport. Not only did he receive an award during the ceremony, he also was chosen to give a witness talk during the event.

“God will help you do things you never thought would be possible. Between talent, their background, networking opportunities, wealth and creativity. They (Hands of Christ recipients) have been given these amazing gifts that have gotten them to where they are, and as a result have been recognized through the Hands of Christ Award,” Malik told the Catholic Courier during an interview April 23.

Malik said he had received two letters in the mail notifying him that he had been nominated for the recognition, as he is involved in activities at two parishes.

Born and raised in Rochester, he and his family, who now live in Greece, have been members of Rochester’s Cathedral Community for eight years. Two years ago, Malik also became involved in activities at St. Louis Church in Pittsford when his mother, Catherine, became the parish’s pastoral associate for pastoral care.

“We’re all pretty involved as a family at the cathedral. But, when I first started working at St. Louis, they (Malik and his siblings) committed at least one weekend a month to St. Louis activities,” Catherine Malik said.

Malik is involved in a variety of ministries at the cathedral, including being a lector, an altar server, an extraordinary minister of Holy Communion and a member of the choir. He sings both tenor and bass in the choir and occasionally cantors. Similarly, Malik is involved in these same activities at St. Louis, except for the choir.

He said he has been involved in these types of activities since the age of 7.

Ultimately, Malik said he decided to accept the award from the Cathedral Community.

“I was pleasantly surprised and humbled,” he said of receiving the award. “It was not only humbling but also shocking, because it brought to perspective how close to the end I am, since it is a thing for seniors. It’s almost over, at least this part of my journey.”

Malik said he also enjoys participating in theater and has been involved in drama club since middle school. He also is part of the track team, a member of the M.O.S.A.I.C.S. club and part of the school’s jeopardy team.

Following graduation, Malik said he will most likely take a semester off to gain some work experience. He hopes to one day pursue a liberal arts degree but said his dream career would be in acting, since he has had a passion for it from a young age.

“I realized that I want to make a life for myself out of doing something that I enjoy and definitely not something that is mundane,” he said with a chuckle.