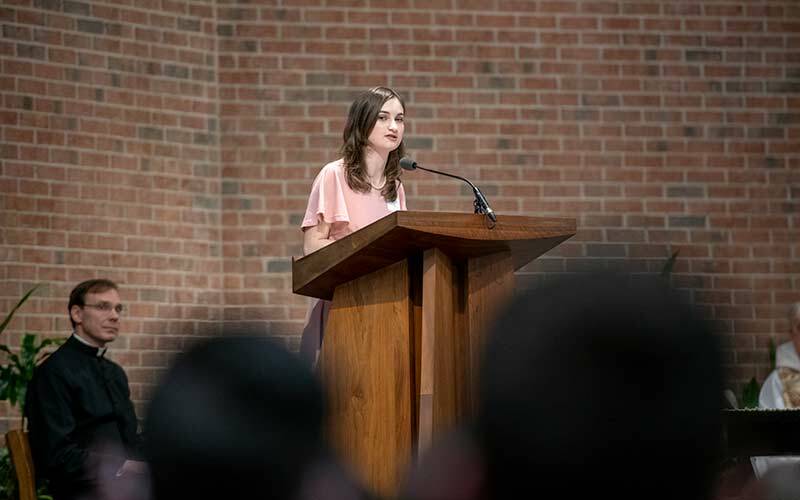 Our Mother of Sorrows parishioner Grace Hubbel gives her witness talk to fellow recipients of the Hands of Christ Award Feb. 15 at St. Lawrence Church in Greece. (Courier photo by Jeff Witherow) 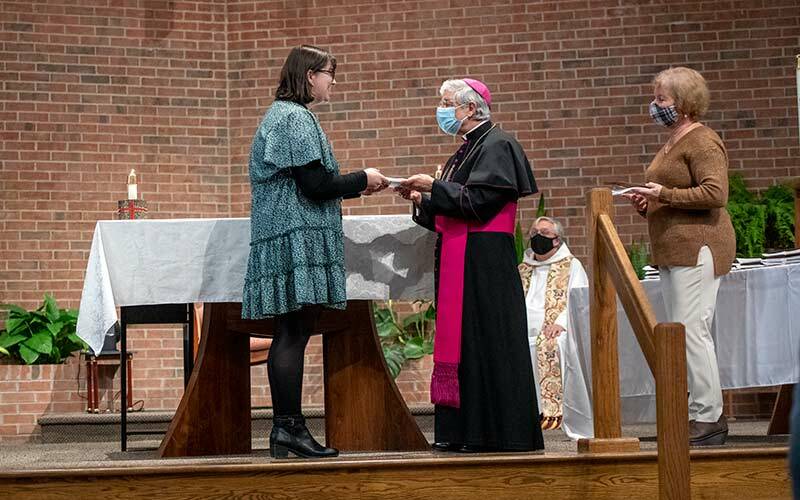 Grace Hubbel, Allison Shoen and Kiera Wilson have followed the examples of their older siblings by serving their parishes and communities. Now, just like their siblings, they have been honored for their service as well.

Grace, Allison and Kiera were among the 255 high-school seniors to receive the Hands of Christ recognition this year. The award is presented annually by the diocese to recognize high-school seniors who have exhibited outstanding service in their parishes, homes, schools and/or communities, demonstrating Christian attitude through their words and examples. The students received their awards Feb. 15 and 17 at St. Lawrence Church in Greece and Feb. 16 at St. Mary Church in Corning, with Bishop Salvatore R. Matano presiding at all three ceremonies.

Grace said she was overjoyed and grateful to the diocese for recognizing her with the Hands of Christ award, an award that she previously saw her seven older siblings receive.

“I always would tell myself that I want that award so much more than any other award, because the meaning behind it means so much to me,” she recalled. “I would always look at the prayer of St. Teresa (of Ávila) on that plaque and just say, ‘That’s what I want to do.’“

The 17-year-old homeschooler spends a lot of time at her parish, Our Mother of Sorrows in Greece, which she calls her “favorite place in the entire world.” At Our Mother of Sorrows, Grace works as the parish’s part-time secretary; is an altar server, lector and extraordinary minister of holy Communion; and is involved with faith-formation and music-ministry programs.

During her witness talk Feb. 15, Grace spoke about Memento mori — “Remember your death.” Grace shared that as a young child, she had an extreme fear of death, but that this phrase has resonated with her since her Crohn’s disease diagnosis four years ago.

“God took my fear of death and made it into something good for me. He turned my anxious thoughts into thoughts of living my life to the fullest and remembering my death in a way that would make me look at my life and see what really mattered, and remind me to see things in a big way, but also in a smaller way, ” Grace told her fellow seniors.

For Allison, receiving the same award as her two older sisters is “pretty special.”

“It’s also just special to be recognized for being strong in my faith, which is something that’s very important to me,” the 17-year-old added.

When she’s not participating in the sports and music programs as a senior at Owego Free Academy, Allison spends a great deal of time at her parish, Blessed Trinity/St. Patrick in Owego, Tioga County. There, she teaches religious education classes, participates in youth group and takes part in the living Stations of the Cross.

At the Feb. 16 ceremony in Corning, Allison spoke to her fellow high-school seniors about how hard it is to maintain one’s faith when society is so focused on material possessions and instant gratification.

“Our society has become so focused on material possessions that we are constantly trying to appear like we have it all,” she said. “Anything we do have, and gain, through instant gratification becomes meaningless as quickly as it was desired, if not quicker, but God knows this. This is God’s way of teaching us that life isn’t about that.”

Similarly to Allison, Kiera grew up with two older sisters, who each received the Hands of Christ Award. She said receiving the award is a “great honor.”

“In the world today, it is incredibly challenging to live a lifestyle worthy of this recognition,” Kiera added.

A senior at Brockport High School, Kiera is the class president, editor for the school’s yearbook, and volunteers with National Honor Society and Key Club. She also plays soccer, lacrosse and bowling for Brockport, and Irish dances with Rochester Academy of Irish Dance. At her parish, St. Elizabeth Ann Seton in Hamlin, she’s an altar server and previously served on the parish council.

Kiera said her faith deepened while attending Family Camp at Camp Koinonia, a place she has attended each summer since she was a baby.

“It’s the main reason my faith is as strong as it is today,” the 17-year-old said during her witness talk Feb. 17. “I have learned so much about church teachings through programs at camp, as well as asking older campers questions about faith, which has changed my perspective forever.”

As they prepare to graduate high school and head to college, Grace, Allison and Kiera said they plan to continue to live out their faith.

“It (my faith) was literally the most important thing when I was deciding which colleges to apply to,” explained Kiera, who will be studying psychology at Franciscan University of Steubenville in the fall.

“I’m excited to try to meet new people who will have the similar faith as mine,” said Allison, who will attend SUNY New Paltz next year.