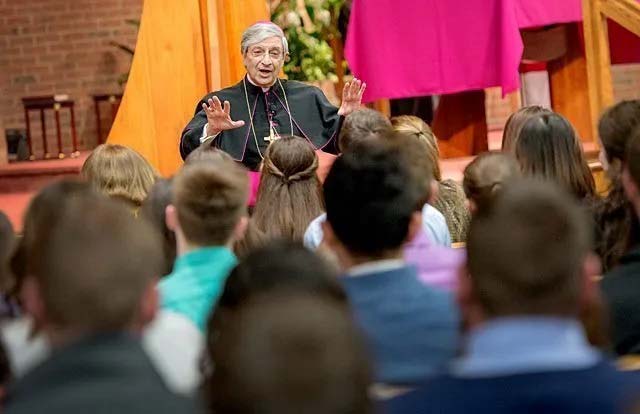 Bishop Salvatore R. Matano speaks directly to the Class of 2016 during the Hands of Christ Awards at St. Lawrence Church March 1. (Courier photo by Jeff Witherow) 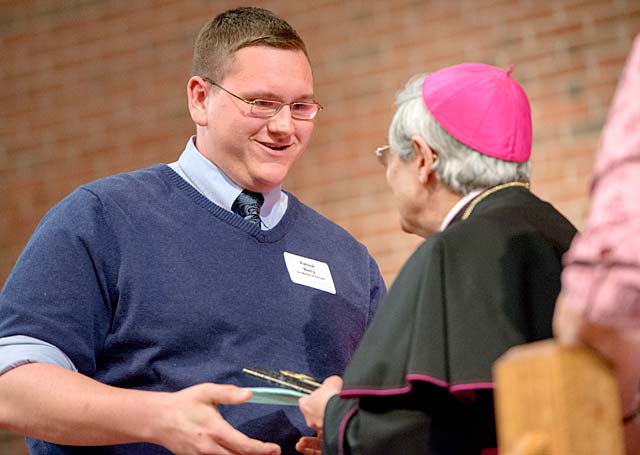 Patrick Barry of Our Mother of Sorrows receives his award from Bishop Salvatore R. Matano during the Hands of Christ Awards at St. Lawrence Church March 1. (Courier photo by Jeff Witherow)

GREECE — Sara Lozy-Lester, a senior at Our Lady of Mercy High School, said faith has always been extremely important in her family of eight.

During a Hands of Christ Award ceremony March 1 at St. Lawrence Church in Greece, she recalled how she first felt God in her life when she was a fifth-grader. That’s when her younger brother, Johnny, was born.

“I saw the doctor hold up my new little brother. I’ll remember that moment for the rest of my life as the first time I truly felt God’s presence in my life,” Sara, a parishioner of Our Mother of Sorrows in Greece, told more than 100 fellow high-school seniors and their families in a witness talk during the ceremony.

As she entered high school, Sara said she continued to grow in her faith. She took part in Foundations, a leadership program at Camp Stella Maris offered by the Diocese of Rochester. That led to her involvement in the Diocesan Youth Committee, where she helped plan diocesan youth retreats.

Although her faith continued to grow, there were moments in her life when it faltered, such as when her grandfather died.

“There was a period of time where I was really angry with God,” Sara explained. “I never doubted God’s presence or existence, but I definitely struggled with my faith.”

After a theology lesson on hope, Sara said she realized that she was abandoning hope and faith when she needed it the most.

“Faith is a journey that has taken me to different places,” she remarked.

Sara shared her faith journey just before receiving her Hands of Christ Award March 1. The Greece ceremony was the first of four held across the diocese, with the others taking place March 2 at Church of the Assumption, Fairport; March 3 at St. Francis & St. Clare at St. Mary Church, Waterloo; and March 5 at St. Mary Our Mother, Horseheads. Bishop Salvatore R. Matano presided at each ceremony.

The annual award was given to more than 550 high-school seniors this year, according to Linda Mehlenbacher, diocesan coordinator for youth and young-adult ministry. The award recognizes high-school seniors who are actively involved in their parishes, schools and communities, demonstrate Christian attitudes and are positive role models for others. The students are nominated for the award by parish leaders.

During the ceremony at St. Lawrence, Bishop Matano, told the teens to be followers of Jesus, noting that to act according to what Jesus expects of us is heroic.

“You’ll get an award tonight,” he said to them. “But in my humble opinion, it nowhere captures the depth and the beauty of your character.”

Bishop Matano congratulated the youths on what they have accomplished, but said these awards are only the beginning of the rest of their lives.

“You have a wonderful foundation on which to build. We rely on you to keep that momentum alive. Keep the faith alive all the days of your life,” he said.

Tyler Decosse said he is looking forward to growing more in his faith as he starts the next chapter of his life in the fall as a student at Mercyhurst University. A multisport athlete and a member of the youth group at Gates Catholic Community, Decosse told the Catholic Courier following the ceremony that one of the pivotal moments of his faith journey was attending the National Catholic Youth Conference in Indianapolis this past November.

“It (NCYC) opened my eyes to how many other kids are out there, just like me, ” Decosse said. “It was an amazing atmosphere. I wish I went when I was younger.”