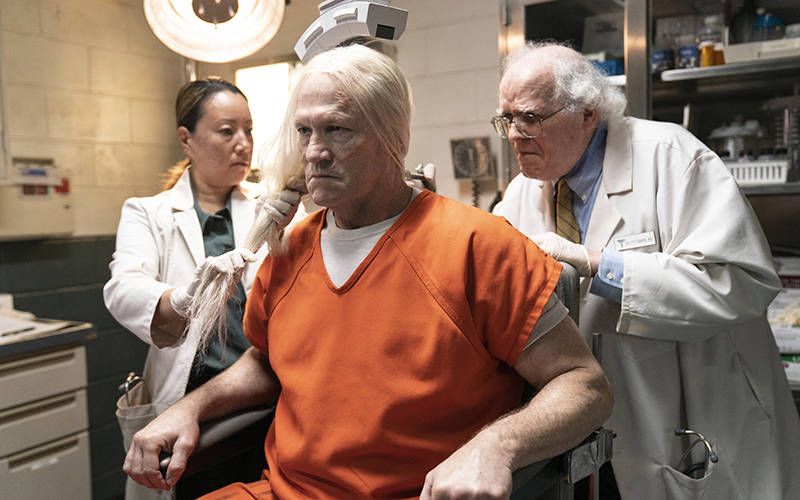 Unfortunately, that extends to the gleefully gory mayhem by which viewers are constantly confronted. Lost under this crimson tide are a few clever witticisms in the script and an overall spirit of genre self-mockery.

As in the previous film, ruthless intelligence officer Amanda Waller (Viola Davis) assembles an ensemble of imprisoned criminals and both bribes and blackmails them into obeying her orders. She’s struggling to neutralize an initially unidentified but highly unusual threat to national security.

The most prominent members of the new team are addled former psychiatrist Harley Quinn (Margot Robbie) and weapons expert Bloodsport (Idris Elba). Other compelled comrades include Bloodsport’s rival marksman, Peacemaker (John Cena), with whom the former is forever squabbling, and Captain Boomerang (Jai Courtney), whose skill is self-explanatory.

The villains are once again under the supervision of earnest Army officer Col. Rick Flag (Joel Kinnaman). Their task is to infiltrate the laboratory of a mad scientist called Thinker (Peter Capaldi) and prevent the powerful creature he has long nurtured there from being used against the United States.

Complicating their mission is the fact that Thinker’s lab is located on Corto Maltese, an island nation where a recent coup has brought an anti-American regime to power. Its president is Gen. Silvio Luna (Juan Diego Botto), who soon becomes romantically entangled with Quinn.

All this might have amounted to a bit of daft fun. Sylvester Stallone, for instance, provides the voice of a dimwitted, rubbery-skinned shark-human hybrid while David Dastmalchian plays forlorn, mommy-obsessed superhero Polka-Dot Man.

But whatever enjoyment might have been garnered from the tongue-in-cheek proceedings is spoiled by the gruesome deaths to which innumerable extras are subjected. They’re beheaded, torn asunder and liquefied as Gunn continually ups the heedlessly brutal ante until all bets are off.