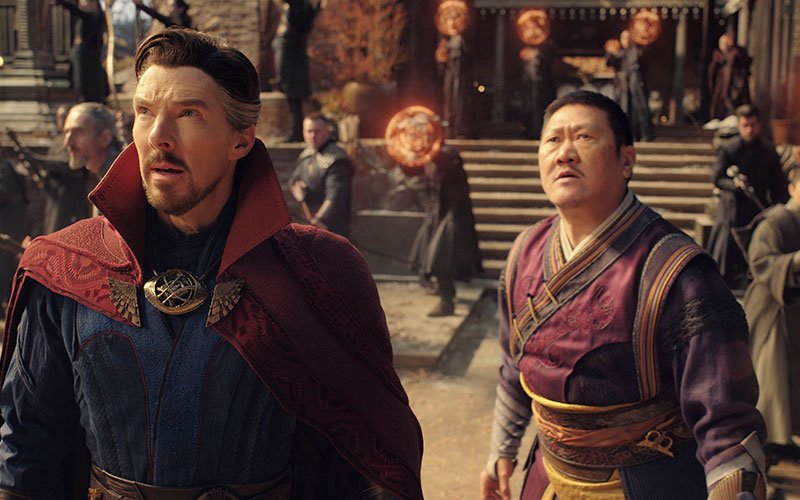 Benedict Cumberbatch and Benedict Wong star in a scene from the movie "Doctor Strange in the Multiverse of Madness." (CNS photo by Marvel Studios)

NEW YORK (CNS) — The award for the most appropriate film title of 2022 goes to “Doctor Strange in the Multiverse of Madness” (Disney). Truly, this is a maddening, multidimensional, decidedly strange, yet typically “Marvel”-ous movie based on the comic book series.

Taken at face value, this is your basic popcorn film, designed as grand escapist entertainment. Director Sam Raimi, who helmed the popular Spider-Man film trilogy starring Tobey Maguire, checks all the requisite boxes as the action unfolds at a furious pace with eye-popping special effects. Parents are advised that the violence, though stylized, is intense and sometimes gory, and the language occasionally salty, meaning younger Marvel fans should stick to the comics.

Viewers unfamiliar with the Marvel canon and the interconnectivity of characters and plots will be hopelessly lost as the story, written by Michael Waldron, skips across said multiverse, alternative realities featuring familiar faces (and a boatload of cameos from previous Marvel films).

For the uninitiated, Dr. Stephen Strange (Benedict Cumberbatch), introduced in the eponymous 2016 film, is a neurosurgeon turned grand wizard, having been trained in the dark arts and the manipulation of the astral plane by the supreme sorcerer (and sidekick) Wong (Benedict Wong).

When we last saw the good doctor, he helped Peter Parker (Tom Holland) open the door to another dimension in the recent blockbuster “Spider-Man: No Way Home.”

Old habits die hard, as quickly revealed in “Multiverse of Madness.” But first there is a wedding: Strange’s ex-fiancee, Christine Palmer (Rachel McAdams), is getting hitched. The former lovers pledge mutual respect and happiness before a gigantic octopus descends, a la King Kong, on Manhattan.

Ah, but this is no ordinary cephalopod. It’s from another universe, and before it is vanquished by Strange and Wong, disgorges a hostage: a young woman named America Chavez (Xochitl Gomez). She has a special gift: the ability to travel at will through the multiverse. That means all the baddies are after her, including versions of Strange in other dimensions.

Among these is a familiar face: Wanda Maximoff (Elizabeth Olsen), also known as the Scarlet Witch. She intends on using Chavez to take her power and travel to another universe where she can, surprisingly, live out her life as a single mother to two moppets, Billy (Julian Hilliard) and Tommy (Jeff Klyne).

But Marvel films are rarely so pro-family, and the wicked witch’s dream would wreak havoc across all universes. A titanic battle ensues halfway across the world between the forces of good (Strange) and evil (Maximoff), with Chavez as the prize.

Needless to say, the unexpected occurs, portals are opened and doppelgangers appear in droves. Strange comes face-to-face with a group of superheroes called the Illuminati, who may or may not be the next generation of Avengers.

“Multiverse of Madness” is awash in silliness and mumbo-jumbo, mixing sorcery, the occult and religious imagery. Sensible viewers will not take this seriously, but impressionable ones may need guidance that this is all harmless make-believe.

The film contains pervasive occult dialogue and action, some stylized violence, fleeting gory images and a handful of crude and profane terms. The Catholic News Service classification is A-III — adults. The Motion Picture Association rating is PG-13 — parents strongly cautioned. Some material may be inappropriate for children under 13.