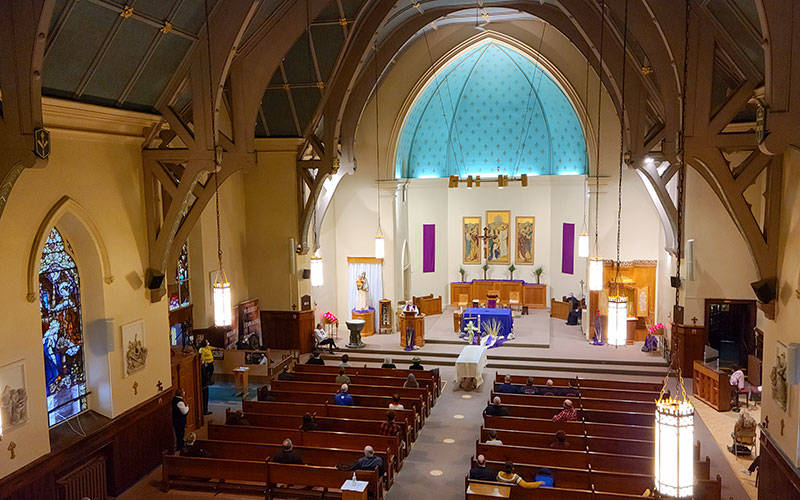 However, the way that Amenhauser’s life ended was anything but gentle.

According to Rochester Police, the 53-year-old was intentionally set on fire by two teenagers March 12 in his Lyell Avenue apartment, just one block east of Holy Apostles Church. Incurring second- and third-degree burns over 70 percent of his body, Amenhauser died four days later at Strong Memorial Hospital.

Based on the gruesome nature of Amenhauser’s death, and also because he had no known surviving family members, many community organizations and individuals came together to honor his memory. They included Holy Apostles, which hosted a 10 a.m. funeral service for Amenhauser March 31. The Liturgy of the Word was livestreamed by the Catholic Courier. Father Mugavero also noted that the Easter Sunday Mass at Holy Apostles, beginning at 9:30 a.m. April 4, will be offered in remembrance of Amenhauser.

The March 31 service was led by Father Mugavero, who called Amenhauser’s murder “so horrifically wrong.”

“He certainly was not someone who should have been treated in a negative way of any kind, let alone deserve the horrific suffering and death he endured,” Father Mugavero said, adding that we all must take responsibility for creating a world where something like this could happen.

“How is it, as a society, (that) we have young people barely halfway through their second decade of life with such nonexistent sensibilities regarding life and the value of human life?” asked Father Mugavero — referring to the teens who have been charged in the murder — while standing at the Holy Apostles ambo just a few feet from Amenhauser’s casket.

Meanwhile, Bishop Salvatore R. Matano — who participated in the service as well — emphasized that Amenhauser’s death serves as a reminder of the urgent need for God and Jesus to occupy a much larger place in our society’s consciousness.

Looking beyond Amenhauser’s life on this earth, Father Mugavero and Bishop Matano assured their in-person and online congregations that his soul is being welcomed by God in paradise. Father Mugavero also sounded a message of hope by noting the many people who have recently paid tribute to Amenhauser, even though the great majority never knew him personally.

“Love and goodness will triumph, and are far more powerful than evil,” he stated.