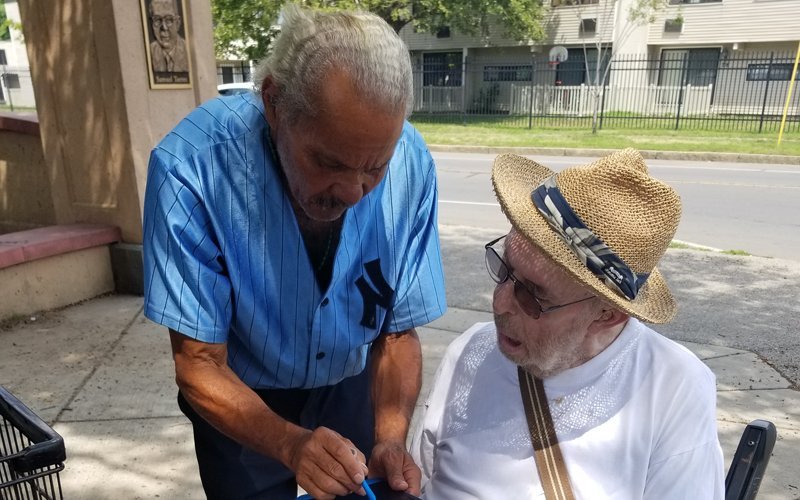 For a man known for inspirational words spoken in his signature booming voice, not being able to speak is one of his greatest frustrations.

As Father Laurence Tracy’s ALS (amyotrophic lateral sclerosis) has progressed, a tablet that he writes on and carries with him in a satchel is now his only mode of communication.

The disease, though, has not robbed him of his sense of humor or the ability to travel around his North Clinton Avenue neighborhood on a motorized scooter.

I had to run to catch up with him on July 26 until he stopped his scooter to chat with a neighbor, who then debated Father Tracy’s age with me.

“I’m older than the moon,” Father Tracy quipped. He finally wrote down his birth date and fist bumped the man, who then rode off on his bike.

Afterward, I congratulated Father Tracy on having the Los Flamboyanes building renamed after him the day before.

He revealed that he found out about the honor accidentally, since the event planned by officials from the City of Rochester and Landsman Development Corp. was meant it to be a surprise. I knew days before, as the planning committee needed a photo of him for the plaque being presented during the rededication. The city purchased and used one from El Mensajero Cat√≥lico’s archives, I am proud to say.

“I almost didn’t go,” he admitted.

The ultimate humble servant, he said the honors and recognitions being bestowed on him belong to the Latinos who did the work.

But, I replied, he was always with them.

He hopes others take up the role moving forward.

They will have very large shoes to fill, I thought to myself as I walked away with tears in my eyes.