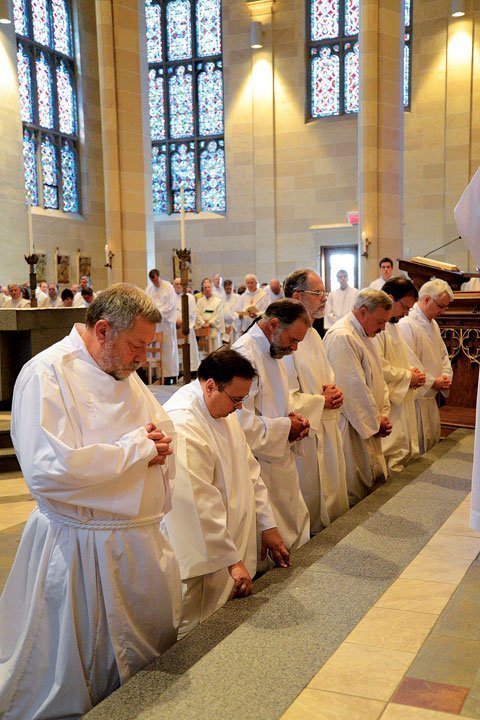 Just as the first deacons were called to serve neglected and marginalized Greek widows, the Rochester Diocese’s newest deacons have work to do as well, said Bishop Emeritus Matthew H. Clark.

During the Mass, Bishop Clark presented the deacons with the Book of Gospels with the words, "Receive the Gospel of Christ, whose herald you have become. Believe what you read, teach what you believe and practice what you teach."

Some who have known the deacons for many years say that is precisely what they will do.

"(Deacon Clark) will bring a lot of compassion, understanding and friendship," said Sister of Mercy Dolores Ann Stein, who was principal of St. Ann School where Deacon Clark taught.

Ann Quartley of Gates said she wasn’t surprised that her older brother, Deacon Bietry, was called to a religious vocation.

"He used to play priest when he was a young boy," Quartley recalled.

"I always had it in my mind that one of my kids was going into ministry of some kind, and for years nothing happened, and then this happened," said Marilyn Jago of Horseheads, Deacon Farwell’s mother.

Her son said it had been an awesome day that made him realize that he was beginning a new journey.

"It has been a very contemplative week thinking about what we are undertaking," Deacon Farwell said.

"It’s special," said Deacon Clark. "All the work has come to fruition, and it’s such an honor to be allowed to serve the people of this diocese. You realized today this is beyond just us. This is the entire community. I’m so proud to be able to serve this community and so proud to be entrusted with the responsibility."

Deacon Rabjohn said he was giving thanks to God while he was lying prostrate on the floor during the Litany of Saints.

"Thank you Lord, thank you for your grace and love," he recalled saying. "Thank you for the men and women who have been in my life who have led me to praise your holy name."

"The first entrance song brought tears to my eyes and when we were prostrate during the Litany of Saints I was thinking — I asked all the saints to pray for us," Deacon Kepler said. "I thought that was a pretty moving experience."

Deacon Lee found himself at a loss for words as he tried to wrap his mind around the ordination.

"It’s just an unbelievable event," he said. "It’s hard to comprehend when you begin and I am only now starting to catch up with what happened."

"I thought about all of the prayers and blessings and support I have received from the community," Deacon Rall said of what he was thinking during the ordination. "I really hope with their assistance and help that I can be the servant that God wants me to become."

Deacon Bietry said the ordination was a great experience.

"I was just thinking about all of the people who helped me get to that point," he said.