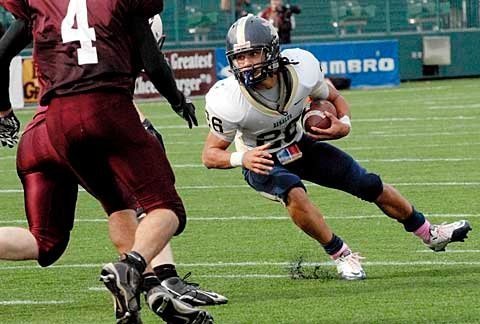 Regardless of the outcome, simply reaching the championship round of any tournament is a commendable feat. That was the silver lining for six Catholic high-school teams in the diocese who posted runner-up finishes this fall.

Geneva DeSales football got all the way to the Section 5 Class D final despite going in as the seventh of eight seeds. The Saints won 28-22 over second-seeded York in double overtime in a quarterfinal game on Oct. 15 as Devon Walton ran for 203 yards and Gimmie Wilson Jr. added 118 while Dillion Hudson had 15 solo tackles. That win was followed by a 22-14 semifinal victory over No. 3 Clyde-Savannah on Oct. 24 as Wilson ran for touchdowns of 25, 15 and 12 yards.

DeSales was finally halted by No. 1-seeded Dundee, 29-22, in the title game on Oct. 30 despite 125 rushing yards from Walton and 111 from Hudson. The Saints led 14-6 at halftime but fell behind 21-14 until Wilson scored a touchdown and two-point conversion run for a 22-21 edge with 1:29 left. However, the Saints could not hold on as they finished their season with a 4-5 record.

Elmira Notre Dame girls’ soccer reached the Section 4 Class C final as the No. 1 seed. The Crusaders won 9-0 over No. 8 Bainbridge-Guilford in a quarterfinal game on Oct. 30 as Marianne Thomaris exploded for four goals and three assists, then triumphed 7-0 in semifinal play over No. 5 Greene on Nov. 3 as Bee Bulkley had three goals and an assist while Thomaris piled up a goal and five assists.

Notre Dame was stopped 1-0 by Marathon in the sectional final on Nov. 5. The second-seeded Olympians got the game’s only goal in the first half. Notre Dame, the defending Class C champion, finished with a 16-3 record.

Elmira Notre Dame boys’ soccer also was a top seed that finished as a runner-up. The Crusaders scored a 4-3 overtime win over No. 8 Edmeston in Section 4 Class D quarterfinal action on Oct. 29 as Colin McLaughlin netted the game-winner. Notre Dame then won 2-1 over No. 4 Margaretville in semifinal play on Nov. 2 as Alex Nassar scored in regulation and then added the game-winner in sudden-death overtime.

ND’s sectional title bid was thwarted by third-seeded South Kortright, 4-2, in the title game on Nov. 6. McLaughlin and Jason Sincock scored as the Crusaders posted a final mark of 13-4-2.

Aquinas Institute boys’ soccer made the final of the Section 5 Class A tournament. The Irish, seeded No. 3, began with a 5-0 win over No. 14 Greece Olympia in a first-round game on Oct. 27 as Mark Lawlor had two goals and Jordan Allen got a goal and two assists. Then came an 8-0 victory over No. 6 East on Oct. 30 as Nick Tata had three goals and two assists. Next came a 3-0 blanking of No. 10 Greece Arcadia on Nov. 4 as Tata scored two goals.

The Irish were stopped in the Class A title game by top-seeded Pittsford Mendon, 3-2, on Nov. 9. Allen and Garrett Pasono scored for the Irish as their team finished up at 13-3-4.

Our Lady of Mercy girls’ tennis reached the Section 5 Class BB final. The Monarchs fell 3-2 to Honeoye Falls-Lima in the championship match on Oct. 15 despite both doubles teams — Abby King and Olivia Schneider at first doubles and Marissa McKnight and Sophia Eliseev at second doubles — winning for the Monarchs that day.