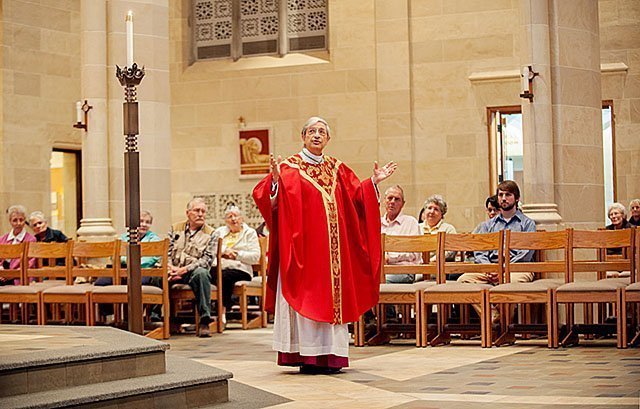 Bishop Salvatore R. Matano arrives at his new post as Bishop of the Diocese of Rochester with glowing recommendations from several people he has worked with, taught and helped.

Mary Garvey, administrative assistant in the theology department of Providence College, where Bishop Matano taught graduate students on a special assignment from 1995-2000, compared the bishop to Pope Francis, both in their shared humility and their choice of autos.

“When he taught in the graduate program, he would drive an old car that was always breaking down,” Garvey remarked.

Although he has a doctorate in canon law and a licentiate in sacred theology from the Pontifical Gregorian University, one would never know because he is so humble, Garvey said, noting that he delighted in visiting seniors at an area nursing home.

He also was a great teacher, she said. That sentiment was echoed by Bob Spirito, director of the Catholic Charity Appeal for the Diocese of Providence, who learned high-school algebra and Italian from the future Bishop Matano. Spirito described Bishop Matano as a brilliant, hardworking and dedicated person who instilled in him a good work ethic and helpful study habits.

The pair have kept in touch for four decades.

“He continues to be a mentor for me and a true inspiration, and I am extremely fortunate and grateful for his friendship,” Spirito said. “He’s got a great personality. I’ve never seen him in a bad mood. If I am down on a particular day, I am laughing within two minutes of talking to him, and he brightens my day.”

He recalled a time when he was to have surgery and he received a comforting visit from Bishop Matano.

“He came with a set of rosary beads and he told me, by giving me the beads, to have faith in the Lord and everything was going to be fine,” Spirito said. “I still have those beads on my table, and it gives me great faith knowing that God is looking over me.”

He predicted that Bishop Matano would be very visible in the diocese and at the chancery.

“Just like he has inspired me to learn, I think he’ll inspire employees to do the best possible job by his humor, and his inspiration and just working with him,” Spirito said. “You want to succeed when he is your boss.”

Nursing student Teresa Lloyd-Coronado of Albany said she is excited for the Rochester Diocese to get to know Bishop Matano and be shepherded by him. Lloyd-Coronado met him at the University of Vermont, where she studied animal science from 2007-11. She said he played a big role in her conversion/reversion to Catholicism and her growing faith; she now attends Mass daily.

Despite Bishop Matano’s extensive travel schedule throughout the Diocese of Burlington, which encompasses the entire state of Vermont, he reserved time at least once a month to worship with the students at the university’s Catholic Center, and the center has grown because of his involvement, she said.

Bishop Matano impressed the college students by remembering all their names and majors and reconnecting with them on subsequent visits.

“He really loves young people and helping them grow closer to God and the faith,” Lloyd-Coronado said.

He made such an impression that when Lloyd-Coronado visited family in Peru she brought him back a Nativity scene. She wasn’t sure how a bishop would react to such a gift, but he joyfully and gratefully received it, she said.

“He’s very inspirational,” Lloyd-Coronado said. “You know when you meet him that he’s there for God so that God can be there for everyone.”

Bishop Matano places a high priority on forming relationships with people of all ages so he can encourage them to develop stronger relationships with God, noted Father Daniel White, vocations director and moderator of the curia for the Diocese of Burlington. The bonds the bishop has formed with many Vermont Catholics are quite strong, Father White said, citing as an example a phone call he received Nov. 6 after word began to spread about Bishop Matano’s new role. The caller was an 89-year-old woman who’d received several visits from Bishop Matano during a prior hospitalizaton, and tearfully asked why the bishop had to leave their diocese, recalled Father White, who has served as Bishop Matano’s secretary for more than five years.

Bishop Matano has a great appreciation for the faithful and goes to great lengths to get to know the members of his flock, Father White said.

“He’s been to every parish in the diocese multiple times. In Rochester he’ll be in every parish probably within the first year. He just loves to meet with the people and kind of get to know them in their regular experience of the faith,” he said.

Father White said several parishes, schools and groups within the Rochester Diocese already have called to request visits from Bishop Matano, much to the bishop’s delight. Although the bishop is very much a “city boy,” as he himself admitted during a Nov. 6 press conference at the Diocese of Rochester’s Pastoral Center, he has never let that stop him from going outside of his comfort zone in order to meet local Catholics, Father White added. Bishop Matano frequently ventured to parishioners’ dairy farms and sugar houses to bless their establishments and watch them milk cows or collect sap to make maple sugar. He does things like this, Father White said, because he sincerely wants to know who people are and what he can do to support them as they strive to live out their Catholic faith and grow closer to God.

“It’s certainly harder to be Catholic today than it was 50 years ago, and you need the bishop’s encouragement,” Father White explained.

Seminarians of the Burlington Diocese certainly are among those who have been encouraged by Bishop Matano, and especially by the example of his priestly experience, Father White said. Many of them, even those currently studying in Rome, called Father White on Nov. 6 to bemoan the impending departure of the bishop they’d thought would ordain them.

“I’ve been doing counseling on the side,” Father White quipped. “He’s beloved by the seminarians.”

Seminarians have been inspired by Bishop Matano’s “very pure example” of the priesthood, he explained. The bishop has no hobbies and has not taken any vacation time since arriving in the Vermont diocese in 2005, but he never complains about his workload, he said.

“This is his life,” Father White said simply.

A former high-school teacher and college professor, Bishop Matano also is very focused on Catholic education and faith formation for people of all ages, Father White said. The bishop has a very sharp mind, and oftentimes while visiting local Catholic schools he would step in and help with the days’ lessons, regardless of whether the teachers were helping students solve equations or instructing them in the proper ways to diagram sentences, he added.

Bishop Matano is committed to reaching out to Catholics who’ve fallen away from the church and welcoming them back to the flock, Father White said. The bishop also is driven by a deep reverence for the Eucharist and usually makes a point of presiding over several first Communion celebrations each year. He wrote about the importance of the Eucharist several times during his eight years in Burlington, and Father White said he has no doubt Bishop Matano will work to encourage a deep appreciation of the Eucharist among Rochester Catholics.

“These priorities have been part of his priesthood from day one,” Father White said.