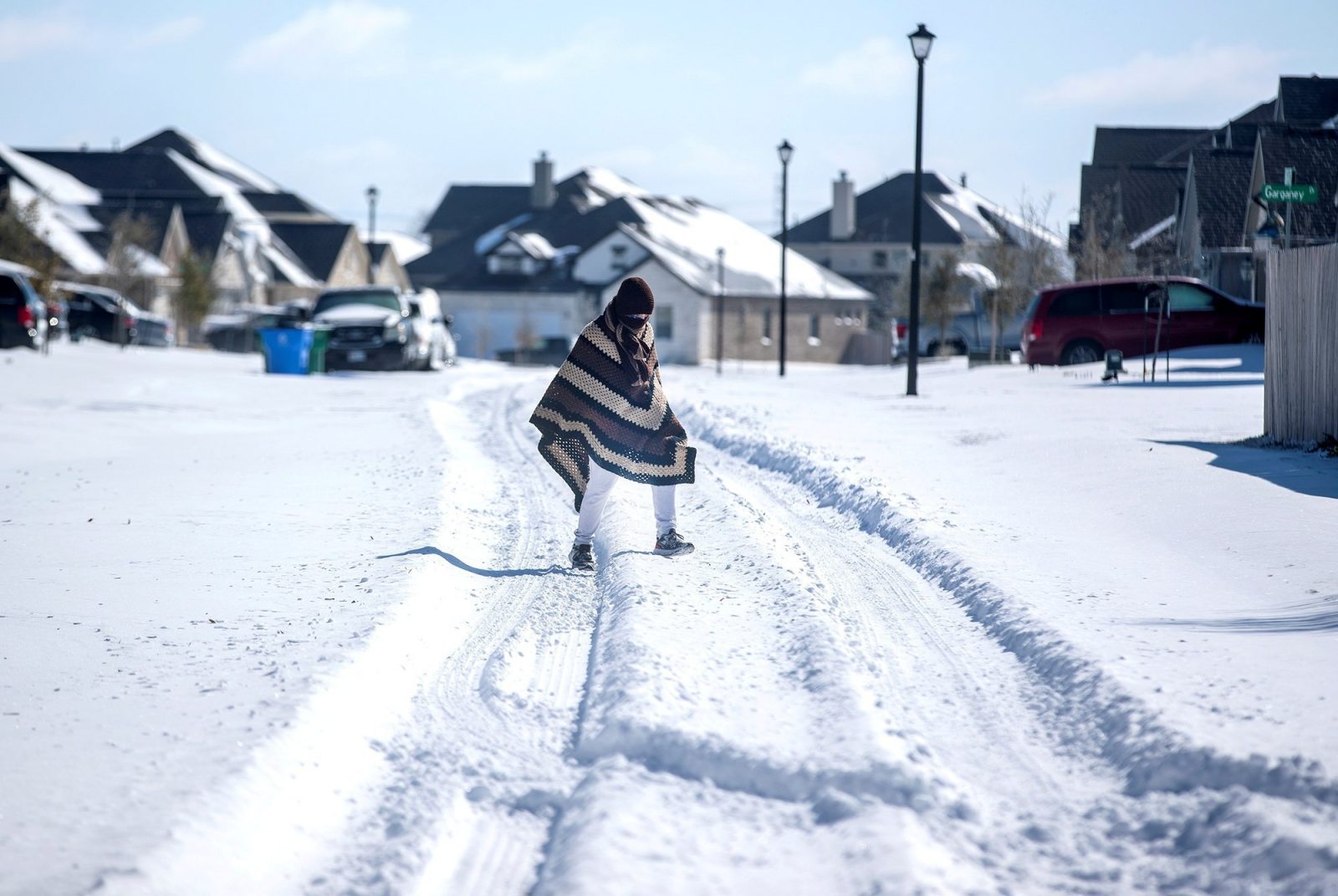 A man in Pflugerville, Texas, walks to his friend's house Feb. 15, 2021, in a neighborhood that had no electricity. (CNS photo by Bronte Wittpenn/Austin American-Statesman, USA Today Network via Reuters)

Rolling power blackouts in Texas and Oklahoma left some families without heat for hours at a time, necessitating the opening of at least one church in the Diocese of Dallas to endangered people.

The lack of electricity and the cold weather led parishes throughout the region to cancel Ash Wednesday Masses and the distribution of ashes for the first time in memory.

Archbishop Gustavo García-Siller of San Antonio granted dispensation from fasting and abstinence for the day that marks the beginning of the holy season of Lent.

The Electric Reliability Council of Texas, the nonprofit corporation that operates the state’s power grid, said the number of customers without electricity service peaked at 4.3 million early Feb. 16 and remained at 3.4 million 24 hours later.

Water systems also were affected as power outages led to pump shutdowns and the cold fractured underground pipes. A burst waterline caused extensive damage to the offices of Catholic Charities of Eastern Oklahoma in Tulsa.

“It’s really a nightmare for more people than you can imagine,” David Woodyard, president and CEO of Catholic Charities Dallas, told Catholic News Service Feb. 17 in describing the brutally cold weather conditions. “It’s been a real struggle. It’s affected everybody no matter your level of wealth you have.”

The north Texas agency had taken in more than 100 homeless people as the cold weather settled in, Woodyard said.

St. Paul the Apostle Church in Richardson, north of Dallas, also opened a parish hall to people whose homes were without power at the height of the cold snap Feb. 15. Woodyard said they were able to return home a day later.

While some areas of the Dallas metropolitan region had seen repeated electricity outages during rotating blackouts, service remained intact in other communities throughout the duration of the emergency, Woodyard said.

“It’s not a fair rolling blackout,” he added.

Dallas Bishop Edward J. Burns, who served in the Diocese of Juneau, Alaska, before being assigned to Texas, tweeted “Let it snow!” the afternoon of Feb. 14, noting that “as a missionary bishop in Alaska, I was accustomed to processing into Mass in the snow.” But he offered prayers for people’s safety as the onslaught of winter weather began.

The cold air penetrated as far south as the Texas Gulf Coast. Catholic Charities of the Archdiocese of Galveston-Houston continued to check on the safety of clients, particularly the elderly, said Betsy Ballard, the agency’s director of communications.

“I don’t think dire is an overly dramatic term. So many people in this community have no power. It’s especially difficult for people who were already vulnerable and lacked resources when the weather is decent,” Ballard said.

“What we have done is provided shelter for a few seniors in a motel as the cold was beginning to set in. Our case managers identified people in great need. There was one senior who had a disabled adult child,” she added.

Electrical power was spotty in the archdiocese, causing the agency’s food distribution networks to shutter for the short term.

Patrick Raglow, executive director of Catholic Charities of the Archdiocese of Oklahoma City, a native of Toledo, Ohio, took the weather in stride, but expressed concern for people who lost power and were shivering in their homes.

The agency is not a direct provider emergency services, however, Raglow said, agency staff members were made available to other nonprofits to assist with overflowing shelter operations.

The agency’s daytime drop-in centers were closed because more than a foot of snow made them inaccessible. “We’re closed for staff and client safety,” Raglow told CNS Feb. 17.

Other services were continuing as much as possible online or via telephone.

“This is a moment. So long as we get people through it, we’ll be fine,” he said.