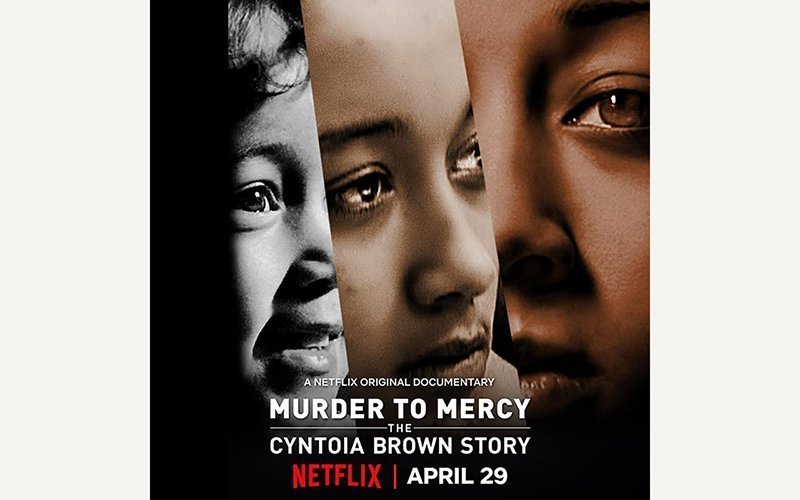 This is the TV poster for "Murder to Mercy: The Cyntoia Brown Story" streaming on Netflix. (CNS photo by Netflix)

NEW YORK (CNS) — In 2004, 16-year-old Tennessee sex-trafficking victim Cyntoia Brown was arrested for the murder-robbery of a man who had apparently agreed to pay her for sex, Johnny Allen. Tried as an adult, she was convicted and sentenced to life without the possibility of parole.

More than a decade later, reality TV star Kim Kardashian was among the prominent advocates lobbying for an end to Brown’s incarceration. Their efforts proved successful in 2019 when Republican Gov. Bill Haslam commuted Brown’s sentence to 15 years, and she was subsequently released.

Brown’s cause was also helped by filmmaker Daniel H. Birman’s raw and intimate documentary “Me Facing Life: Cyntoia’s Story,” which aired as part of PBS’ “Independent Lens” series in 2011. To make the film, Birman tracked Brown’s trial and imprisonment for six years. His second profile of her, “Murder to Mercy: The Cyntoia Brown Story,” is streaming now on Netflix.

Commendable, if uneven and rather prosaic, the 96-minute film is rated TV-MA — mature audiences only. That’s appropriate given that the challenging topics it covers include, besides those already referred to, rape, suicide, child abuse, domestic violence and narcotics use. Still, to his credit, Birman does deal with these matters in a sensitive and thoughtful way.

In “Murder to Mercy,” Birman assumes that his viewers are coming to the facts about Brown with no prior knowledge of her case. And his scope is even broader than it was in the earlier movie since he recounts in detail all the significant events from her arrest to her release.

After a rushed prologue, he first focuses on the court hearing held to determine whether Brown should be tried as an adult. Part of the evidence in that proceeding was given by Vanderbilt University forensic psychiatrist William Bernet, whose interviews with Brown had convinced him that she suffered from “a serious personality disorder.”

Brown’s defense aimed for a best-case scenario under which, with therapy and a good residential program, Brown could be freed at age 19. The prosecution, unsurprisingly, emphasized the harsh nature of her crime, shooting Allen as he slept in order to rob him. As Brown herself admits, in an admirably forthright confession to her adoptive mother, Ellenette, “I executed him.”

Birman argues compellingly that the criminal justice system punished Brown unfairly because it failed to account for a number of factors. One was her experience of being trafficked. Another was the harmful impact generational pathology within her family had on her.

Some of the documentary’s most evocative passages recall how biology ineluctably caught Brown up in a web of decades-long violence and abuse. Her biological mother, Georgina Mitchell, was the same age when she became a mother as Brown was when she killed Allen. Drinking vodka and taking crack while pregnant led to Georgina’s imprisonment at 17.

While only in the second grade, Mitchell had witnessed her own mother Joan Warren’s suicide by shooting, which may help to explain much of her behavior. And the cycle went further back: Warren had been raped and beaten by her husband.

Despite this troubled heritage, Brown eventually earned her bachelor’s degree from Lipscomb University. In an ironic twist, Preston Shipp, her former prosecutor, became both her professor and her supporter. He describes Brown as “a beautiful, intelligent, caring woman who can make things better in this world.”

Its difficult content notwithstanding, there’s much that will edify viewers in “Murder to Mercy.” But Birman’s strictly linear storytelling works against the documentary. His presentation emphasizes the first half of Brown’s story and the legal issues surrounding her trial and appeal. But the audience doesn’t learn enough about the offender’s efforts to reform herself.

We don’t see her, for instance, pursuing her degree or interacting with other students nor do we gain much insight into her motive for transforming herself. Viewers who have to choose between the two would be well advised to watch Birman’s earlier account of Brown’s history in which she comes much more sharply into focus.