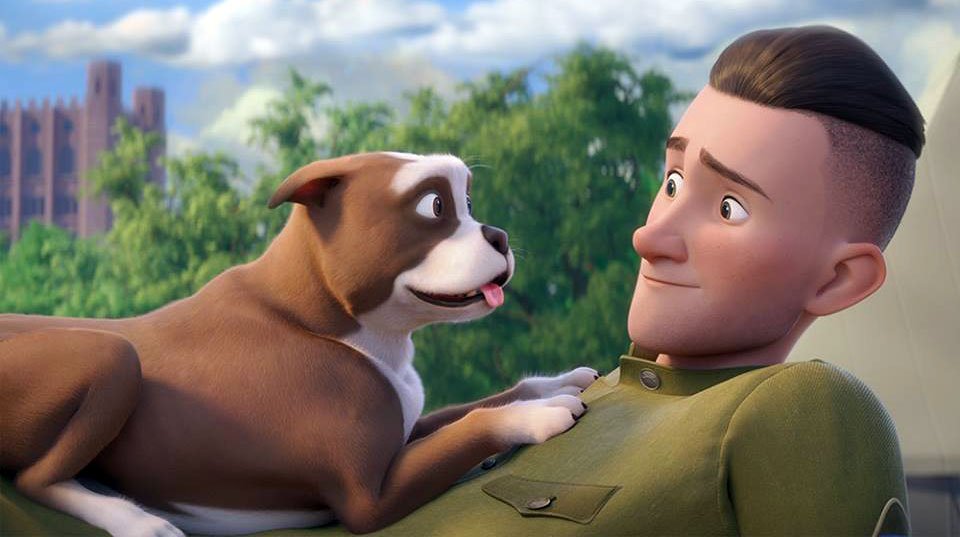 NEW YORK (CNS) — Any animal who manages to become an honorary noncommissioned officer in the Army must have a story worth telling. And so it proves with the generally endearing animated slice of history “Sgt. Stubby: An American Hero” (Fun Academy).

This comedy-tinged drama also makes an easy introduction to an important chapter of America’s past — namely the nation’s involvement in the First World War — for young people. Scenes of combat and a single off-color joke, however, bar endorsement of it for all.

Adopted by Robert Conroy (voice of Logan Lerman), a young soldier doing basic training in his home town of New Haven, Connecticut, the formerly hungry, homeless Stubby wins not only Conroy’s heart but those of his comrades as well, becoming the mascot of the 26th Infantry “Yankee” Division. He especially bonds with two of his Conroy’s closest buddies, Elmer Olsen (voice of Jordan Beck) and Ty Schroeder (voice of Jim Pharr).

Refusing to be left behind when this trio of comrades heads overseas, Stubby sneaks onto their transport ship and winds up in the trenches of France. In between warning of gas attacks and digging out wounded soldiers buried by exploding shells, the plucky pooch gains a new pal, Gaston Baptiste (voice of Gerard Depardieu), a Frenchman seconded to the American forces who also has befriended Conroy.

Asides about French culture, from ex-restaurateur Gaston’s fine cooking to the rules of “petanque” (a Gallic variant of bocce), feel as though they’ve been inserted to stretch a somewhat basic plot to feature length. Like the outline of the Great War the film provides, however, they may have some educational value.

Those looking for a revisionist approach to the period will be disappointed. The German eagle looms menacingly over the map of France like a motionless raptor, and only the Kaiser’s troops — looking sinister in their gas masks — resort to chemical warfare.

On the other hand, the script does use Schroeder’s status as a deeply patriotic but discriminated against German-American to make a plea for ethnic tolerance. And believing viewers will appreciate a fleeting invocation of God’s blessing as well as a scene of silent remembrance which can be interpreted as prayer for a fallen warrior.

The battlefield setting frequently imperils characters, including Stubby, in a way that might frighten little moviegoers. And there’s an incongruent scene in which an officer declares to the assembled troops of the 26th that they could all learn something from Stubby — only to look down and find the pup licking himself indelicately. Whereupon all gathered burst into laughter.

That ill-judged moment aside, it’s hard to resist this warmhearted tale of a Doughboy and his dog.

The film contains much stylized violence and an instance of anatomical humor. The Catholic News Service classification is A-II — adults and adolescents. The Motion Picture Association of America rating is PG — parental guidance suggested. Some material may not be suitable for children.