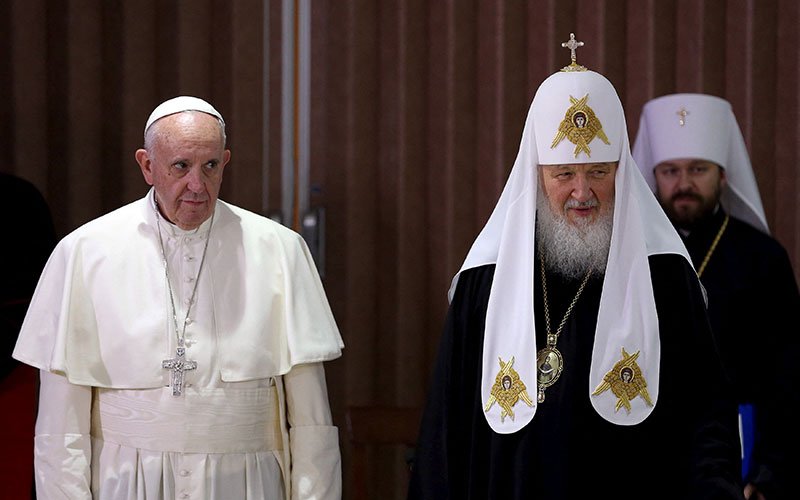 Pope Francis and Russian Orthodox Patriarch Kirill stand together after a meeting in Havana in this Feb. 12, 2016, file photo. The pope is scheduled to visit Kazakhstan Sept. 13-15 to attend the Congress of World and Traditional Religions, at which he plans to meet with Patriarch Kirill. (CNS photo by Alejandro Ernesto/Reuters pool)

VATICAN CITY (CNS) — While the purpose of Pope Francis’ visit to Kazakhstan will be to attend the Congress of World and Traditional Religions, the interreligious meeting  also will serve as the backdrop for his long-awaited meeting with Russian Orthodox Patriarch Kirill.

The pope told Univision that he has “a good relationship” with Patriarch Kirill, who has strongly supported Russia’s invasion of Ukraine.

Despite their opposing views on the war, the pope said, “It is evident that his position is conditioned by his homeland in some way; which is not to say that he is an indecent man. No; God knows each person’s moral responsibilities in the depth of their hearts.”

Held every three years, the Congress of World and Traditional Religions was the initiative of Kazakhstan’s first president, Nursultan Nazarbayev, as a way of promoting dialogue among religions, the congress’ website stated.

It added that another congress objective is to prevent “the use of religious feelings of people for the escalation of conflicts and hostilities.”

While the outcome of a meeting between Pope Francis and Patriarch Kirill is yet to be seen, the significance of such a meeting taking place in Kazakhstan during the Congress of World and Traditional Religions is important, said Bishop Adelio Dell’Oro of Karaganda, Kazakhstan.

“It would be beautiful if that meeting would happen here and that there would be an understanding that religion is not at the service of the state, as Pope Francis told the patriarch during his online meeting with him,” Bishop Dell’Oro told SIR, the news agency of the Italian bishops’ conference, in an interview published July 1.

“It is important for spiritual leaders to affirm that religion is a factor of unity and reconciliation, and therefore it is a responsibility for those who are believers, especially if they are Christians, to recognize — beyond all differences and divisions — that Jesus is the one who unites us at the root,” he said.

Patriarch Kirill’s outspoken support of Russian President Vladimir Putin’s war on Ukraine, particularly his justification of the war as a defense against Western immorality, has caused ruptures within the Russian Orthodox Church and strained relations with the Catholic Church.

Pope Francis has been especially blunt in reminding Patriarch Kirill of the proper role of a shepherd of the people.

In an interview with the Italian newspaper Corriere della Sera, published May 3, Pope Francis said that during a Zoom meeting in mid-March, he told the patriarch, “Brother, we are not clerics of the state, we cannot use the language of politics, but of Jesus.”

“The patriarch cannot turn himself into Putin’s altar boy,” the pope told the Italian newspaper. That reminder, however, did not go over well and prompted a critical response from the Moscow Patriarchate.

“Pope Francis chose an incorrect tone to convey the content of this conversation,” the patriarchate said May 4. “Such statements are unlikely to contribute to the establishment of a constructive dialogue between the Roman Catholic and Russian Orthodox churches, which is especially necessary at the present time.”

Some Vatican officials — including Cardinal Kurt Koch, president of the Dicastery for Promoting Christian Unity –have been more openly critical of the Russian patriarch.

In an interview published in late June with the German newspaper Die Tagespost, Cardinal Koch said Patriarch Kirill’s support of the invasion for “pseudo-religious reasons” amounted to “heresy.”

He also said he was grateful Pope Francis canceled a proposed meeting with Patriarch Kirill in Jerusalem, adding that a meeting between the two while “acts of war are still taking place” would “be exposed to serious misunderstandings.”

“This is because it could be misunderstood as the pope’s support of the patriarch’s position, which would badly damage the pope’s moral authority,” Cardinal Koch said.

Andrii Yurash, Ukraine’s ambassador to the Holy See, told Catholic News Service July 18 that although the Catholic Church has tried to establish closer ties with the Russian Orthodox Church “for more than half a century,” the war in Ukraine has shown the Moscow Patriarchate’s true colors.

“The whole time, the Russian church was trying to use the Holy See, not from a Christian point of view, but from a political point of view; as an instrument to be used in favor of the Soviet state before and later, in the interest of the Russian state,” Yurash said.

Nevertheless, while relations between the two churches may be strained, an interreligious meeting aimed at promoting peace and unity could prove timely.

Furthermore, Pope Francis’ presence at the meeting is the congress’ “greatest achievement” because he “is the most important and recognized international figure in the field of promoting dialogue between different nations, cultures and religions.” said Bishop José Luis Mumbiela Sierra of Holy Trinity in Almaty, president of the Catholic Bishops’ Conference of Central Asia, in an interview with Vatican News published Aug. 4.

“Evangelizing also means strengthening social coexistence through dialogue and cordiality between those who profess different beliefs, or none at all,” Bishop Mumbiela said.