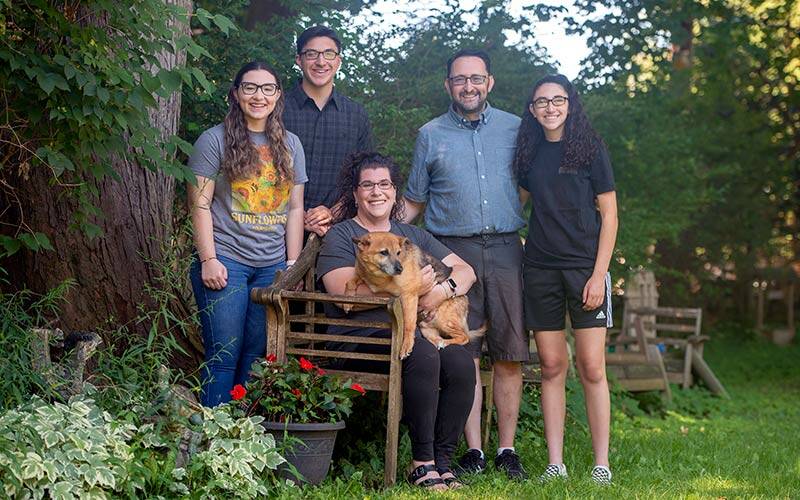 The Sherron family is seen at their home in Gates July 7. (Courier photo by Jeff Witherow)

GATES — Back in the 1990s, Mona and Jim Sherron went with Nazareth College classmates on a service trip to Clairvaux Farm in Maryland, which provided transitional and emergency housing for people in need. The couple still remembers a conversation they had while volunteering at the facility.

“I remember telling him there, if we ever have kids, I want to instill service in them,” Mona recalled.

Flash forward to 2022, and the couple’s three children are living out their parents’ dream.

Bella Sherron, 19, is a Nazareth College junior and frequent volunteer, most recently in classrooms in Rochester city schools.

Lucas Sherron, 18, just graduated as Aquinas Institute’s salutatorian and recently earned the Diocese of Rochester’s Hands of Christ Award in recognition of his many volunteer endeavors.

And Sophia Sherron, 15, is an Aquinas sophomore who frequently volunteers with her basketball and soccer teams at St. Pius Tenth Parish in Chili, where Jim helps coordinate the parish’s CYO athletic program.

“That makes me so happy,” Mona said.

Mona and Jim, who with their children belong to Gates’ Parish of the Holy Family, attribute their desire to serve others to their own parents. Mona’s parents, Diana and Ettore Ranalletta, and Jim’s parents, Carol and Doug Sherron, never hesitated to jump in and help others.

And their children noticed.

“Any time there was anything going on at our Catholic school, in my brain I was like, my mom and dad are going to volunteer for that. I just knew it. That was just part of their hearts, so it made it part of our hearts,” said Mona, who attended St. Charles Borromeo School in Greece.

Ettore Ranalletta was the custodian at St. Charles Borromeo Parish for many years, and as a child, Mona frequently tagged along with him while he worked. Occasionally, he’d encounter homeless people sleeping in the church, and he always treated them with kindness and respect, Mona said.

“He would say, ‘We have to help them,’ so he would give them a blanket, give them food,” she said.

When Mona was a student at Aquinas, her dad helped her deliver Thanksgiving baskets to needy families through the school’s Peer Ministry program. On one memorable occasion, Mona and her father delivered a basket, left the recipient’s home and had nearly reached their car when Ettore Ranalletta decided they needed to stay and do more.

“We helped her cook the turkey dinner. It’s something that I will never forget,” Mona recalled.

When they became parents themselves, Mona and Jim strove to follow their parents’ examples. Mona occasionally brought the children with her to Hope Hall, where she has worked for 24 years as an academic development teacher and classroom aide. One of Lucas’ earliest service-related memories is of helping the custodian at the Gates school.

That realization motivates Lucas’ many actions to help others. During the spring of 2020, for example, he found a way to bring the Aquinas school community together while COVID-19 kept people physically separated. He produced six episodes of Aquinas’ long-running “Morning Update” program from his basement — dubbed “Studio A” — then emailed them to the school community. Each episode contained school news and comedic bits as well as interviews — conducted via Zoom — with faculty, fellow students and alumni.

“It was about bringing people together,” he explained. “It brought some laughter and joy in some confusing and troubling times.”

Last year, while working with Aquinas’ Peer Ministry, he spearheaded several fundraising drives for various charities. And last March, he took action against food insecurity in the Rochester neighborhood around his school when he installed a small outdoor food pantry on the Aquinas campus.

Last year Bella took her own steps against hunger and volunteered in a soup kitchen in Philadelphia. She also took a mission trip to South Dakota, where she volunteered at a YMCA on a Sioux reservation in South Dakota. One of her favorite aspects of such work is getting to know people from different backgrounds.

“I’m helping people and also learning from them,” she said.

“One thing I’ve come to realize is we’re all one community,” Jim added.

“Profiles in Faith” highlights Catholics in the Diocese of Rochester of all ages and walks of life who are role models for living the faith. To suggest someone to profile, email Newsroom@Catholic Courier.com.