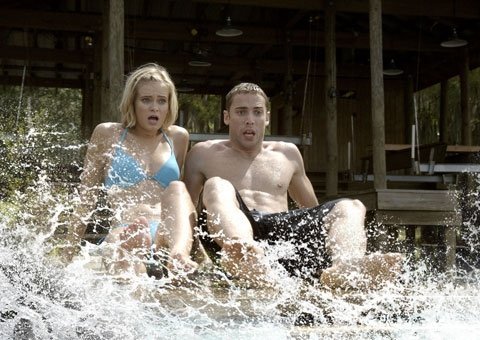 NEW YORK (CNS) — The 3D in "Shark Night 3D" (Rogue) can best be interpreted as standing for "Dumb, dumb, dumb." That applies to the plot, the filmmaking technique and the characters — as well as to any viewer foolish enough to waste money on seeing it.

Director David R. Ellis ("Snakes on a Plane") and screenwriters Will Hayes and Jesse Studenberg borrow their stale formula from 1980s screamers — such as the "Friday the 13th" franchise — in which nubile young people head out to a lake for a weekend of drinking and casual sex, only to be slaughtered by some relentless killer.

As the title indicates, in this case it’s sharks, and not only great whites — just about any kind of shark that can be attracted by blood: Big ones, little ones. … Till you can’t tell the preyers without a program.

These party-hardy collegians head off to a palatial house on Louisiana’s Lake Crosby — a saltwater lake, mind you; otherwise there’d be no plot.

There’s no cellphone reception there, and Sheriff Sabin (Donal Logue) is a slow-witted drunk. So the snacking on limbs and occasional full-body meal begin apace.

The big twist — such as it is — turns out to be that two bayou rednecks straight from central casting, Red (Joshua Leonard) and Keith (Damon Lipari), have been treating the lake as their own private aquarium, introducing a variety of shark species just because they like to see folks get munched up.

Can Sara and Nick, the two smart virgins, outsmart their piscatory predators? Even the sharks hardly seem to care.